By Chris Williams: Devin Haney made it clear on Monday that his father Bill Haney will decide whether he’s ready to face Vasily Lomachenko or not after he defends his undisputed lightweight championship against George Kambosos Jr on October 16th in Melbourne, Australia.

Haney (28-0, 15 KOs) sounded like he’s not sure if he’ll stay at 135 after the Kambosos fight. Whether he stays to face Lomachenko or not potentially will be determined by how he performs against Kambosos in their rematch on ESPN at the Rod Laver Arena.

It won’t make Top Rank promoter Bob Arum happy if Haney chooses not to fight Lomachenko, as he made it clear on Monday that’s the fight he intends on making next.

“To add to that, my main focus right now is George Kambosos. After I’m victorious, I’m going to leave it up to my dad to let him choose and let him see how I look,” said Devin Haney.

“He’s been there since day one and knows me better than anybody. So if he feels like I’m fit enough and my weight is good, and I can stay and fight [Lomachenko at lightweight], then I’ll do it. It’s all up to my dad. my coach, and we’ll see what’s next.

“Right now, my main focus is George Kambosos and going back to Australia and doing it once again to perform at a top level once again as best as I can for the Australian fans and the Australian people and go in there and have fun,” said Haney.

“For Vasily Lomachenko to come to the United States to overcome everything he’s done to get in the ring,” said Bill Haney when asked about Devin Haney’s thoughts on potentially fighting Lomachenko.

“These guys are warriors. Lomachenko is a good fighter, but I know there’s something special about Devin. But right now, we have George Kambosos on the menu for October 16th, and that’s what it is.

“Our focus is 100% on him and Devin making history. This is a historic fight for Devin in the sense that no one in the four-belt era other than Pernell Whitaker has ever gotten the belts and defended them.

“So it’s a great opportunity to add to his legacy to go over to Australia and doing it in front of the Australian fans again,” said Bill Haney. 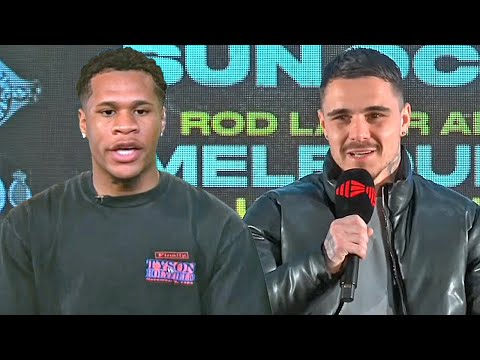