Clubs rise a division after success in the NAL Championship Cup contest, while Bedford & County triumph in Plate competition

The top eight clubs from the Championship battled it out for the Cup in Bedford on Sunday (Aug 21) after Crawley just led Chelmsford by a single match point coming into this match.

However, it was Sale Harriers Manchester who took an early lead after five events and, midway through the competition, had a lead of 17 points over Chelmsford and Crawley.

Seun Okome, the third ranked and UK bronze medallist, took the men’s triple jump with successive leaps of 15.67m and 15.68m in the final two rounds.

The Sale wins kept coming and Megan Davies won the women’s 3000m from Herts Phoenix’ Annabel Gummow in 9:47.58 as they began to look like Cup winners who were now a near certainty for promotion to the top flight. However Chelmsford and Crawley were still snapping at their heels with eight events still to be completed. 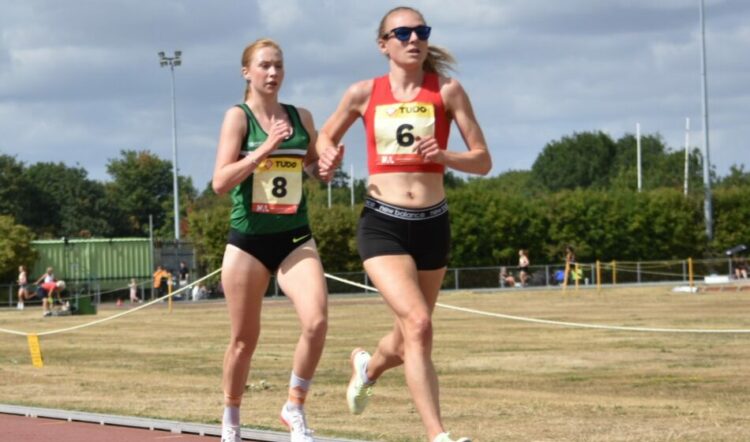 Sale completed their programme when junior pole vaulter Sophie Ashurst, the world under-20 sixth-placer, scored with a 3.93m first-time clearance. However, while they won the Cup, Sale did not quite do enough to overcome the Crawley lead in the Championship, so that honour went to the west Sussex club.

Chelmsford were second in the league coming into this match and began well on the track as English schools silver medallist Onyeka Okoh was over the higher senior 400m hurdles well – the 17-year-old winning in 53.36. They then had budding decathlete Kristian Brown take the men’s javelin with 62.06m. Liverpool’s Oliver Wright and Havering’s Peter Brinton-Quinn were also over 60m, while Okoh returned later to add the 400m flat in 47.99.

Crawley were building points but were doing so without any early A-string first places but did get on the score sheet by taking the women’s 4x100m and with just seven events left to declare were lying second overall, 30 points down on Sale but ahead of Chelmsford – a position that they held at the death. 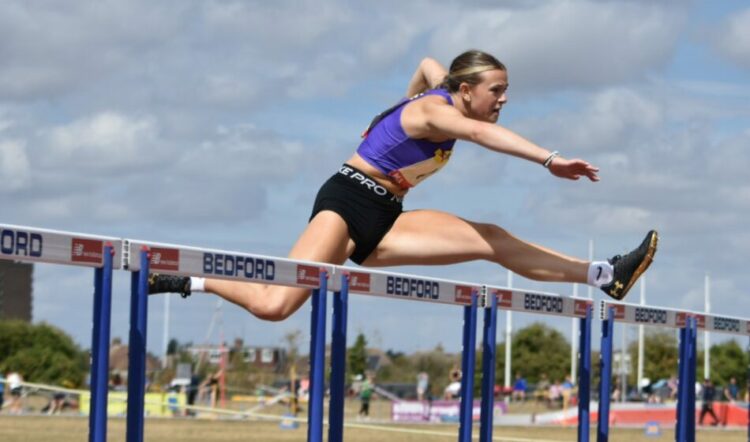 Liverpool had been posting A-string wins and 17-year-old Meg Corker matched her legal 100m hurdles best time of 13.98 but, as the end of the match drew in sight, they were trailing in last place.

Herts Phoenix had a string of wins and Khahisa Mhlanga, who won the England title on this track last month, had a narrow win over Havering’s Gemma Kersey in the women’s 1500m, in 4:28.84.

Tonbridge are primarily a distance running club but they did have Kirsty-Anne Ebbage take the women’s discus. They also had men’s A-string wins in the 800m and 1500m events before James Kingston narrowly headed team mate Stephen Strange to win the 3000m in 8:32.14.

However, they failed to finish in the men’s sprint relay, where Chelmsford got disqualified as Sale increased their match lead win another win. 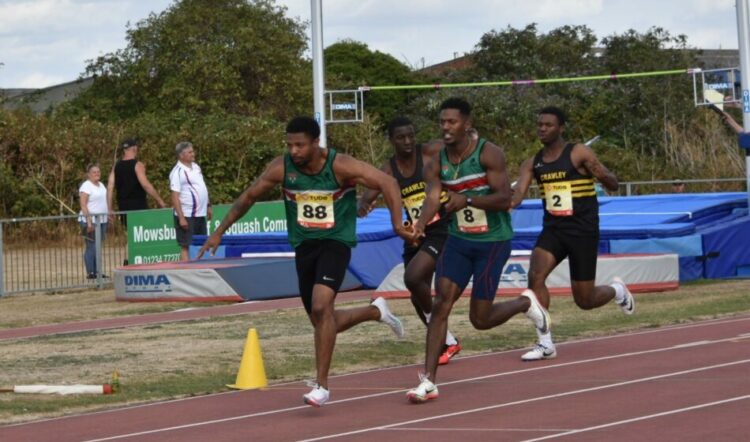 Crawley, Sale and Chelmsford go up to the Premiership for 2023, while fourth-placed Tonbridge will be involved in a paper match with the Premiership’s 13th club, Newham & Essex Beagles to decide who either takes or keeps the top flight spot. 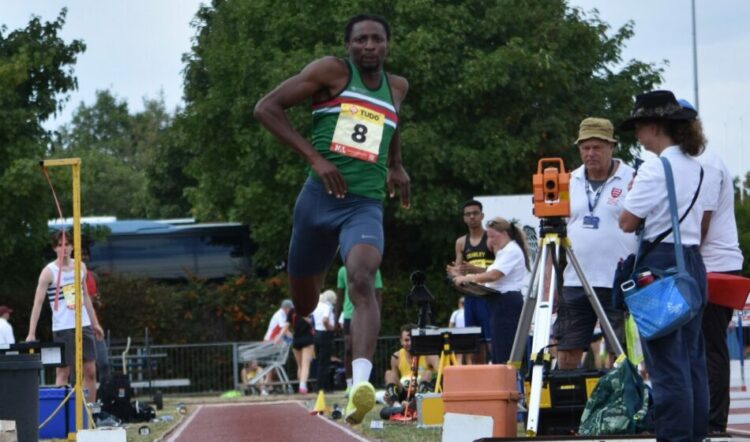 Bournemouth and hosts Bedford & County were the top two clubs coming into this Plate final while the others had to try and avoid demotion to National 1 for next season.

After a battle with Herne Hill, hosts Bedford prevailed and it was Peterborough & Nene Valley who crept up to take second while Bournemouth had a bad day. Peterborough had to thank Mindaugas Jurska for shot and discus wins as well as good back up performers outside of the top podium step.

It was Bedford who took an early lead, which they had extended by the half-way point to 33 points. Herne Hill, Peterborough and Kingston were vying for second, but Bournemouth were struggling in seventh spot on the day.

Bournemouth did, however, have England champion and UK fourth placer Phoebe Dowson out to 51.27m in the second round of the women’s discus and a big win over team mate Danielle Broom.

Bedford had 16-year-old Gracie Wall, the top ranked under-17 for the year, attempt a personal best 1.77m in the high jump but had to be content with a third-time clearance at 1.73m for victory. This completed a full set of league wins for the English Schools second placer.

Later in the day Bedford were fighting to hold off Herne Hill and Belinda Sergent had two 11.70m triple jump leaps, one with no wind and one with an excess! 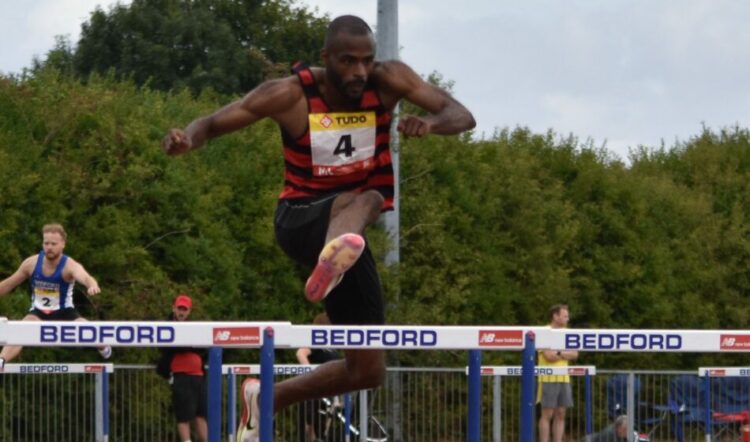 Herne Hill had been posting a string of wins on the track and, after a double in the sprint relay, overtook Bedford and with just seven events to declare were now a fraction clear in the battle for Plate honours. Their track wins had started with Isaac Ogunlade taking the men’s 400m hurdles in 54.70 in a division where A and B ran together as there were only eight takers from a possible 16.

Myles Copeland-Naulty, 18, who returned to the sport this year after previously only running as an under-15, won his event in 21.90 for Herne Hill. He had earlier won the B-string 100m in 10.89 after team-mate Michael Miller had won the A-string in 10.75. 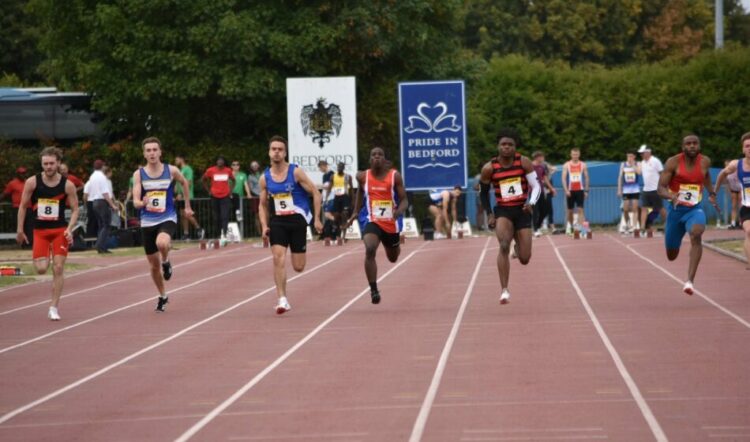 If the men’s 400m hurdles was short of a quorum, it was a similar story in the other running and jumping races where the women’s 400m hurdles had nine missing. It was the same in the men’s steeplechase and just eight contested the sprint hurdles, but it was even worse in the women’s ‘chase where there were just two competitors from a possible 16. But full credit to Herne Hill’s Sarah Grover who lapped the only other competitor. Her club then had three wins and a second in the relays.

Liverpool had Zoe Price win the women’s hammer with 58.09m and, late in the day, Irishman James Kelly dominated the men’s shot put with a 16.64m third round best for his third league victory of the year.

Wigan had been having a quiet time before English Schools silver medallist Will Jackson was over two metres for the first time. The 16-year-old had six perfect first time clearances up to and including a new best of 1.98m and was then over 2.0m at the third time of asking to go second on the UK under-17 outdoor lists for the year.

Enfield were also posting the odd win and decathlete Conrad Winter set a windy PB of 6.94m and a legal one of 6.76m for the north London outfit in the men’s long jump.

While Bedford took the Cup, Wigan and Reading drop to National 1 for next year and Enfield & Haringey will have to await the results of a paper match with National 1 third placer City of Portsmouth to decide their future in the league.