Noah Lyles crossed the line and looked towards the clock. He knew he was the 200m world champion again, but he wanted more. The number initially flashed up as 19.32 – precisely the same time as Michael Johnson’s North American record from the 1996 Olympics.

Lyles got his wish. There was a huge roar from the crowd, bigger than the one which had greeted yet another clean sweep of the medals for the home athletes, as the time was adjusted and stood at 19.31. The winner, as he put it “went ballistic”.

Lyles roared and ripped his sprint suit in the style of the Incredible Hulk, before pointing towards a sizeable tattoo on his torso which reads “icon”.

While he might not yet be held quite in the same regard as figures such as the 1968 200m Olympic champion Tommie Smith and bronze medallist Juan Carlos – the men history will remember for their podium protests at those Games in Mexico and who were introduced to the Eugene crowd just before this final began – his influence and profile is growing rapidly.

Lyles has not been afraid to speak out over social issues, or his own struggles with depression and mental health. He was refreshingly open in the immediate aftermath of the successful defence of his world 200m title, too.

“When I got that tattoo I said: ‘I want people to be able to say Noah Lyles is an icon’ and of course that comes with running fast but at the same time that comes with trials and tribulations, too,” he said of his body art.

“That’s what being an icon is – showing people that you can do it, too. We all go through problems and we all get better.”

There was nothing but joy for the American at Hayward Field. He is back. With a vengeance.

His nation’s vice-like grip on the men’s sprints events at these championships tightened further, too, emulating the example of the 100m runners by covering the podium in stars and stripes.

The absence of the injured 100m champion Fred Kerley did nothing to lower the standard, either, with Lyles scorching to the third-fastest time in history after a superb bend, while Kenneth Bednarek (19.77) stuck to his task for silver and, at 18 years and 174 days old, Erriyon Knighton became the second-youngest World Championships medallist ever after his run of 19.80.

“I was in form for a world record, but I am okay with the American record,” added Lyles, who clocked 10.15 and then 9.16 each half of his race, before being congratulated by Johnson on the track. “I felt I got the best start I could possibly ask for. The race was basically set up for me.

“It’s an immaculate feeling to be on the podium with two fellow Americans. We are a dominant force in America now. This is by far the most fun I’ve ever had at a track meet and we still have the 4x100m to do.”

He added: “I thought I was changing last year. It scared me. I was fearful and I wanted to get the spark I had back. I did. There’s no pressure, there’s pure fun out here.” 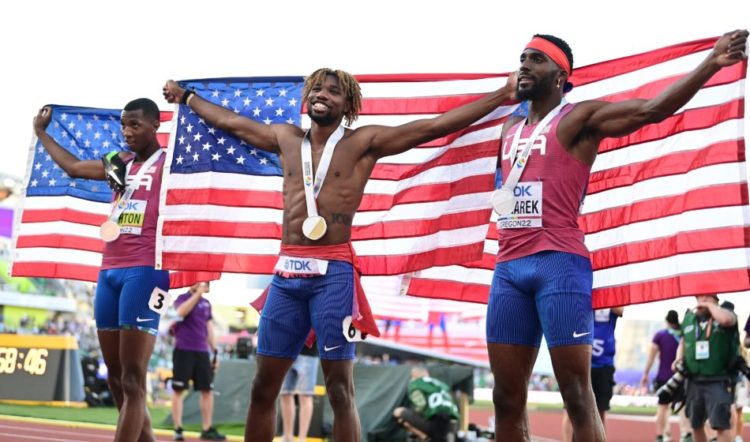 Meanwhile, Jakob Ingebrigtsen’s confidence levels clearly haven’t been dented by losing out to Jake Wightman in the men’s 1500m earlier this week. The European champion was back in action on the Hayward Field track for the heats of the 5000m and qualified second-fastest overall with 13:13.92, just behind the 13:13.30 of Kenyan Jacob Krop.

The big names ­– such as Olympic champion Joshua Cheptegei, 2019 5000m silver medallist Selemon Barega and two-time champion Muktar Edris – all progressed, as did British champion Marc Scott. However, Ingebrigtsen does not appear to be fazed by the challenge which awaits in the final on the last day of competition.

“The 5000m is always tough,” he said. “It is a long distance and high speed but I do not see anyone beating me.”

In what has been a big week for British middle distance running, there was disappointment in the fact that neither of the country’s two semi-finalists were able to progress in the men’s 800m semi-finals.

Neither Kyle Langford nor Daniel Rowden (1:46.27) went through during a qualifying round in which Algerian Slimane Moula was fastest overall with a run of 1:44.89. Marco Arop of Canada was second-fastest in 1:45.12 while Olympic champion Emmanuel Kipkirui Korir was third-fastest in a season’s best 1:45.38.