Munich 2022 ends with ecstasy and agony for British relay teams The 2022 European Championships ended in both agony and ecstasy for the British 4x100m relay teams, with the men scorching to gold in a championships record of 37.67 while the women were unable to get the baton around.

With Germany taking victory in that final event of the closing night, it meant the host nation finished at the top of the medals table in Munich.

In an almost direct reversal of fortunes, a German mix-up at the first changeover left the way clearer for the men to secure victory. With Jeremiah Azu handing over to Zharnel Hughes in fourth after his leg of 10.44, there was a breakdown in communication between Kevin Kranz and Joshua Hartmann which left the latter out of the running.

“It’s ours!” screamed Azu in the heat of the moment. The Welshman might have been a little premature, but he proved to be right.

The 200m champion Hughes’ leg of 8.79 moved Britain into the lead ahead of Poland as he handed over to Jona Efoloko while the former world under-20 champion clocked 9.41 to keep his team ahead, though now it was France who were the closest pursuers.

Nethaneel Mitchell-Blake has a wealth of experience at anchoring a relay, however, and he burst away to record the fastest closing leg of 9.03, giving himself time to celebrate as he crossed the line to win his country’s sixth gold of these championships.

France, led home by Jimmy Vicaut, were second in 37.94, while there was a national record of 38.15 for Poland.

“It’s a great feeling first and foremost to come out with the gold and to get a championship record is a bonus along with the win,” said Mitchell-Blake, who also paid tribute to outgoing British Athletics head coach Christian Malcolm.

“It’s testament to the guys who ran in the heats, Tommy [Ramdhan] and Harry [Aikines-Aryeetey] who got us here. It’s a true team effort and it’s nice to end a third championships with a gold.”

The men’s celebrations had barely died down when it was time for the women’s final to unfold. Hopes had been high of another relay gold coming Britain’s way but, as Asha Philip came to hand over to Imani-Lara Lansiquot, the baton hit the ground and any medal-winning ambitions immediately evaporated.

All team captain Ashleigh Neilson and anchor runner Dina Asher-Smith could do was watch the competition fly by in what was the first time the British women’s team has failed to finish since the European Championships of 2012.

Germany took the lead on the third leg through surprise individual gold medallist Gina Lückenkemper before Rebekka Haase brought the team home in 42.34, with Poland breaking their national record in 42.61 for silver and Italy coming third in 42.84.

“I’m shocked by what happened out there,” said Philip. “I can’t really get my head around it. We were so excited because the boys just won in a championship record and we came here to defend our title but things just didn’t go my way in that race.”

There were words of consolation, however, from Asher-Smith who said: “We’re a team, we have seen it all. We’re such a strong squad and I feel we know what we’re capable of, we have a phenomenal time in us and unfortunately this is why the relays, and the hurdles are everyone’s favourite events because there’s so many factors to get right.

“We’ve been so consistent over the years, we’re global medallists and were reigning champions and that doesn’t come without being excellent. Things happen and it’s unfortunate but it’s okay, we just grow from it.” 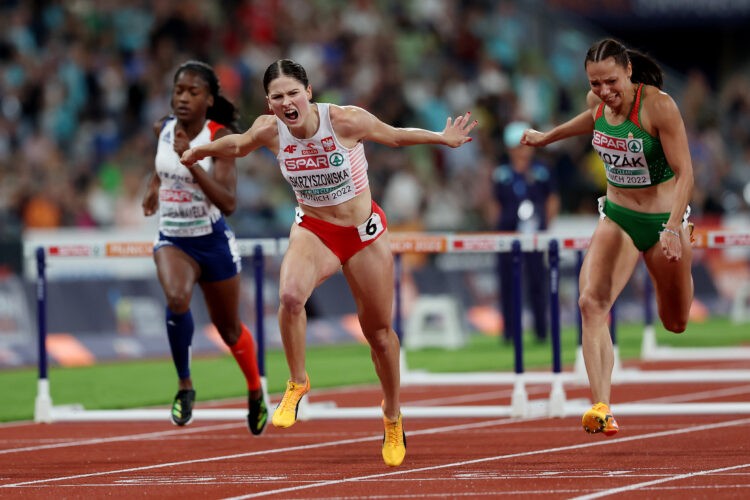 That relay final was the second race in a matter of 40 minutes for Poland’s leg one runner Pia Skrzyszowska, who had earlier taken advantage of another British error to take 100m hurdles gold.

Cindy Sember, the British record-holder, fifth at the World Championships and bronze medallist at the Commonwealth Games, had qualified fastest with a run of 12.62 (0.1) in the semi-finals and looked set to top the podium.

In the final she clattered the second hurdle, however, and was out of the running from then on. Skrzyszowska, the European under-23 champion, could scarcely believe it as she won in 12.53 (-0.1), with Hungary’s Luka Kozák equalling the national record of 12.69 she had set in the semi-finals to land silver and Swiss Ditaji Kambundji, sister of 200m champion Mujinga, coming third with 12.74.

Britain’s other competitor, Jessica Hunter, failed to progress to the final after a semi-final run of 13.43.