Hearn: “Usyk Won’t Lose A Round To Wilder” After facing his arch rival Tyson Fury in three entertaining fights, former WBC heavyweight champion Deontay “The Bronze Bomber” Wilder took some time off from boxing, but now he’s back and he’s on the verge of making his return to the ring on October 15 when he takes on Robert Helenius (31-3, 20 KOs) live on Fox pay-per-view at the Barclays Center in Brooklyn, New York. 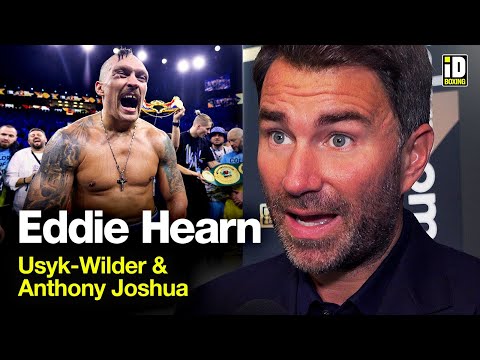 A product of Tuscaloosa, Alabama, Deontay Wilder won a bronze medal at the 2008 Olympics. Seven years later he won the WBC strap in January 2015, and during his championship reign Wilder had ten successful title defenses. In December 2018 he fought the first of three bouts against Tyson Fury, but unfortunately he came out of the trilogy with a draw and back-to-back losses. Now Wilder is ready to get back on track, and the journey to becoming a two-time heavyweight champion starts with with his October 15 matchup against Robert Helenius.

Going into the heavyweight clash against Helenius, Wilder is the favorite to win the bout. If The Bronze Bomber is able to defeat Helenius, his opportunity to fight for the heavyweight title may come as early as the first quarter of 2023. The current unified WBA/WBO/IBF heavyweight champion Oleksandr Usyk (20-0, 13 KOs) has verbalized his interest in facing Wilder in the squared circle, but a particular boxing promoter thinks the potential fight between Wilder and Usyk will lack competitiveness.

During a interview with iD Boxing, Eddie Hearn voiced his opinion of the potential Usyk-Wilder clash. “I think he (Usyk) schools him. I mean look, Luis Ortiz schooled Deontay Wilder. I mean particularly the second fight, but Deontay Wilder has the ability to turn the lights off with one shot, which he did in that fight. He loss what was he eight rounds down or something like that and knocked him out in the ninth. He won’t win a round against Usyk. Not one round, but he could knock him out because he can knock out anyone, but I don’t think Usyk will be there like Ortiz was at that stage of the fight.”

Hearn’s honest assessment of the potentially showdown between Usyk and Wilder didn’t translate well with Wilder’s promoter Lou DiBella as he responded to Hearn’s statement via social media. “Won’t matter if Wilder lands the one punch that knocks Usyk out. And he likely would. Like he would likely knock Joshua out. In fact, Hearn might be right until the knockout punch…but does it matter? Respect the puncher.”

Hearn posted an immediate response to DiBella’s rebuttal by stating, “Might want to read it first… I don’t see Usyk losing a round to Deontay Wilder, but at the same time Wilder carries the power to cause problems for anyone.” Eleven minutes later, Lou DiBella capped off the conversation by posting, “I try to read as little prognostication as possible, but thanks for clarifying.”

A potential heavyweight championship bout between Oleksandr Usyk and Deontay Wilder is a very intriguing matchup. Without question Usyk is by far the better boxer, but the real question is can Usyk get up? Forty-one of Wilder’s forty-two career victories have come by way of knockout. It’s is pretty much impossible to box Wilder for twelve rounds without getting touched by his right hand. On a number of occasions Wilder has stated the fact that his opponents have to be perfect for twelve rounds, but he only has to be perfect for two seconds.

Standing at 6 foot 9 and weighing 277 pounds, Tyson Fury tasted Wilder’s power, and the key to Fury winning was his ability to get up off the canvas. If a Usyk-Wilder fight does materialize, it won’t be a question of if Usyk can win all of the rounds, the question will be can Usyk survive The Bronze Bomber’s right hand?