By Sean Jones: Gennadiy Golovkin’s former trainer Abel Sanchez watched his loss to Canelo Alvarez last Saturday night, and he feels that he had the wrong game plan to beat the Mexican star.

Sanchez said that for Golovkin or anyone to beat Canelo (58-2-2, 39 KOs), you’ve got to be aggressive and take the fight to him in the way that Dmitry Bivol did last May.

Golovkin (42-2-1, 37 KOs) failed to do that, and Sanchez thinks that the game plan was wrong for Gennadiy. He also thinks Golovkin has too many coaches. According to Sanchez, Golovkin has Johnathon Banks in addition to four to four other coaches that don’t have a track record of success.

Sanchez feels that Golovkin veered away from his normal fighting style by choosing to box Canelo than being aggressive and pressuring him. It’s unclear whether Golovkin came up with this idea on his own or if it was his lead trainer Banks’ idea to try and outbox Canelo.

Without Golovkin throwing combinations, he was never going to outbox Canelo. Also, Golovkin fought timidly, as if he was afraid to let his hands go for fear of getting countered by Canelo.

Interestingly, Sanchez said he’d be interested in training Golovkin again if he contacted him or had someone call him.

He feels that Golovkin isn’t too old to be successful, but it would have to be at 160. That’s where Sanchez feels Golovkin is at his best.

“What’s that saying, ‘One guy [Golovkin] didn’t want to fight, and the other [Canelo] was glad of it,’” said Abel Sanchez to Fighthype, reacting to Gennadiy Golovkin’s loss to Canelo Alvarez last weekend.

“I just felt that they fought 24 rounds that they knew each other so well that it was a pitty-pat hitting the mitts type of sparring session. Neither one wanted to take charge.

“I don’t know the reason why Golovkin. Golovkin, to me, was the one that had more to prove and more to gain by being the winner.

“Canelo is at the point right now where he can have a loss like the one he had against Bivol, and it’s not going to affect him that much. Financially that is.

“We can tell when a guy wants to win or just survive to not lose too bad and maybe win. It seemed that way in the first eight or nine rounds for Gennadiy. I don’t understand.

“It seemed to me the diminishing attitude and aggressiveness that he had with me in the fights. He’s trying to be more of a boxer. I don’t understand why. The judges look at him like he’s not winning because he’s not the aggressor because he’s on his back foot, backing up, and the other guy is the aggressor.

“When he’s not doing that, the guy can do whatever he wants, and Canelo was doing whatever he wanted for the first six, seven rounds. No, I don’t think so,”  said Sanchez when asked if Golovkin’s performance was a result of him being 40.

“If you continue your regiment of training the way that you had been training. If don’t allow too much time in between in your regiment, then your strength, in his case, that’s one of his attributes, your strength will maintain.

“It seems like his punches aren’t as effective as they used to be. I remember in many of his fights that as soon as he landed a punch in the beginning of a fight, you’d see the change in the opponent’s eyes and the opponent’s mannerisms.

“In the last fight that I’ve seen clips of, the three or four before this one, I haven’t seen that in the opponent’s eyes. I see them as ‘I can walk through those punches. They’re not going to hurt me.’

“Gennadiy is a strong puncher; he’s a heavy-handed guy, and if his timing is correct and he throws a combination, he’s going to hurt guys. He hasn’t been doing that.

“It seems like he has to wear guys out in order to knock them out, whereas in the past, he could hurt them with anything he wanted to hurt them with.

“We can’t blame it on Johnathon [Banks]. When a fighter gets to a certain level at a certain point, we as coaches, can suggest. I’m the kind of coach that I demand. A lot of coaches suggest what we need to do.

“I think Johnathon did what he thought he needed to do because of the instructions he was getting from his fighter in the gym. You have to have a coach that suits your style that you’ve been fighting with.

“To have four other coaches that had no record of ever being successful with any fighter, Gennadiy Golovkin was a test baby for them. That was a little unfair for Golovkin, in my opinion.

“I didn’t see the Golovkin that we saw in the past in this fight. Yes,  I think so,” said Sanchez when asked if Golovkin should retire. “It wasn’t obvious to me.

“Yes, he didn’t look as good as he had before. If he goes back and changes some things, he’ll be better. He needs to assess his situation and assess it for his own best interest.

“If what he was doing didn’t produce in the fight, then maybe he needs to reassess it. No, I would be the last one to tell him he needs to retire.

“Unfortunately, they talk a lot, but they don’t produce nothing,” said Sanchez when asked if he’d like to see Golovkin fight Demetrius Andrade or Jermall Charlo next.

“Who has Andrade really fought? How long has it been since they fought? The only one that I see that would be a threat for either one of them, Canelo and Golovkin would be Benavidez at 168.

“I don’t think Golovkin needs to go to 168. I think he needs to stay at 160, defend his titles and ride off into the sunset on his terms. Even Charlo. When was the last time Charlo fought, and who did he fight?

“It’s not that he doesn’t deserve the fight. Just like people are criticizing Canelo for taking on Golovkin, an old man at 40. Look at his record. Look at Canelo’s resume. He’s consistently fought some very good guys.

“Golovkin at least has fought some guys and made defenses. Charlo, its been at least a year since he fought, and he’s not penciled in to fight anybody.

“I don’t know who Golovkin will fight next. I guess the organizations will determine that. I think the guy that fights him should be a guy that is consistently in the ring or at least twice a year to deserve a shot at a title.

“If you’re sitting on the bench just because you got #1 doesn’t mean you deserve a title shot to me.

“That’s a difficult fight,” said Sanchez when asked if Canelo should fight Dmitry Bivol again. “In the Canelo fight, he took chances; he backed him up. He did all the things that I thought Golovkin should have done on Saturday night.

“Bivol is a Golovkin, but only 15 pounds heavier, but with the same amateur credentials. I would like to see Canelo defend at 168. I don’t think it’s in his best interest to move up again to 175, especially against a Bivol or Beterbiev, who I’ve said in the past would be a tough fight.

“Those guys are big, and they’re big punchers. They can take a shot, and they’re very skilled. I would like for him [Canelo] to stay at 168 and face the young lions at 168.

“He can still fight those guys, and I think how many times has a small man moved up to a big man and been successful? Very seldom because those guys, especially for Bivol and Beterbiev. They’re 185, 190, and 200. They’re coming down to 175.

“Canelo started out at 147, so he’s moving up. I honestly think he has a lot of challenges at 168 if he takes them.

“I think it would have to be initiated by Golovkin or someone for Golovkin with Golovkin’s approval. I would never initiate that call. It’s an insult to his coach,” said Sanchez. 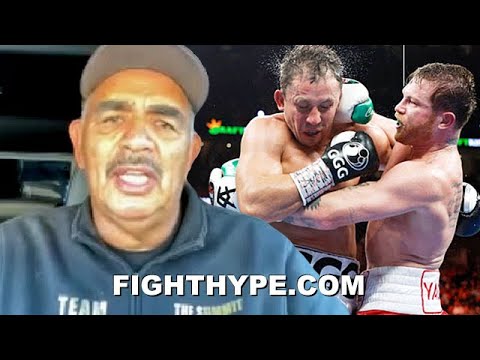