It has been a summer to remember for Laura Muir and she completed the medal mission she had set herself by successfully defending her European 1500m title in style.

The 29-year-old has achieved the unique feat of winning 1500m world bronze as well as Commonwealth and European gold in the same season, as well as 800m bronze.

Just as in Birmingham, she was followed home by Ireland’s Ciara Mageean, who ran a superb race, was the only athlete to chase Muir’s huge surge and went one better than her bronze medal from 2016.

Muir was dead last for the first 600m, having passed 400m in a respectable 65.91, but she soon surged from back to front with two laps to go.

Some athletes might have paid for that burst of speed but she led through 800m in 2:11.41 and did not really pick the pace up again until she approached the bell. It was at that point when Muir went into sprint action, dramatically changing pace as she flew into the closing lap (3.00.68).

The glue was starting to wear off, though, and on the final bend Muir prised open a five-metre gap. Her closing 200m might have been a comparatively slow 31.44 but the damage had been done and she won easily in 4:01.08. Mageean clocked a season’s best of 4:02.56 in second.

This was Muir’s second outdoor European title and it came in her 10th outdoor championships final – the 20th she has contested indoors or out across her career.

On the challenge of attempting to win four major medals this summer, she said: “It looked hard on paper but actually doing it in person? Never again. It was an amazing opportunity and a very unique one that we’d ever get three championships in a year, let alone in five weeks in the summer. It’s just insane.

“I thought ‘you know what, I’ll give it a go’ and my aim was to win a medal in all three which I’ve done and to win the Commonwealths and to win here I’m so happy. This was the hardest one. On paper it was the easiest – one event, only two rounds so physically it was the easiest – but it was so tough mentally. It was the most difficult race I think I’ve ever run and credit to all the other athletes that have done the three because it’s so difficult.

“My coach Andy [Young] looked at all the splits and he said ‘nobody can match you over 400m and if you give a good kick and get a gap you can maintain it and you’ve got a good chance’ so credit goes to him for the tactics, he made a good call there. I just knew to stick to it as best I could because sometimes 1500m is unpredictable but it went to plan.”

The 2018 runner-up Sofia Ennaoui was caught out by the ferocity of Muir’s surge and was an isolated third in 4:03.59 but was pleased with her medal, having sustained a small injury after her fifth place in Eugene. Britain’s Katie Snowden had the race of her life to finish fourth in 4:04.97 while her team-mate Ellie Baker was a fine eighth in 4:05.83.

In the women’s 200m final, Dina Asher-Smith did her best to win her third successive 200m gold after a traumatic last few weeks which had seen her suffer a hamstring injury in the World Championships, subsequently miss the Commonwealths and then cramp up in the 100m in Munich.

However, she was just unable to repel the challenge of world indoor champion Mujinga Kambundji, who went one better than she had done in that exciting 100m final, by taking gold.

Asher-Smith had the better bend but it was the Swiss athlete who finished stronger to win in 22.32 to 22.43.

Kambundji said: “Dina is a great athlete but today it was me who won and this has been an amazing season for me with the indoor season, national records and now two medals in Munich where there are so many Swiss fans.”

Asher-Smith added: “I’m not super happy but Mujinga put together a better race. She’s been improving for ages and congratulations to her but I’m not super happy. I know I am in better shape than that but, at the same time, I came second so it is what it is.

Jodie Williams in the outside lane missed out on a medal by a metre to Denmark’s Ida Karstoft’s 22.72, finishing fourth in a season’s best 22.85, eight years after winning silver in Zurich.

Asher-Smith’s medal was Britain’s 14th of the championships and moved the team three ahead of Germany in the medals table.

Williams’ fourth place in the 200m was Britain’s 37th top eight finish of the championships so far as they went top of the placings with 162.5 points to Germany’s 148. 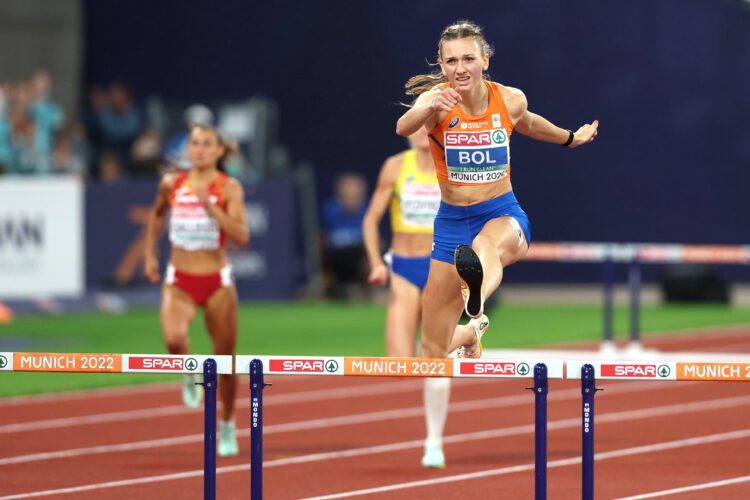 Femke Bol, meanwhile, completed an historic European 400m and 400m hurdles double with a huge winning margin in the latter event as she took gold by over a second-and-a-half and smashed the championships record with 52.67. She still has the 4x400m relay to come too.

“Winning this gold is a big relief and it was a great race for me,” said the Dutch athlete. “I am surprised to achieve such a fast time and proud to do the double but I will never do it again!”

Ukraine took the other medals, through Viktoriya Tkachuk’s 54.30 and Anna Ryzhykova’s 54.86 on a great night for the war-torn country.

German Carolina Krafzik overdid it in front of a roaring home crowd as she looked set to be the best of the rest but finished a shattered last after almost coming to a halt at the last hurdle when a repeat of her semi-final run of 54.32 would have won her a medal. 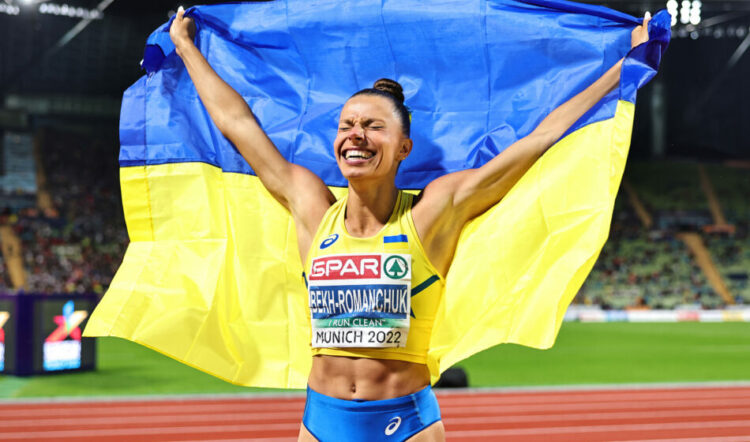 After being in despair the night before when just missing a medal in the long jump, Maryna Bekh-Romanchuk bounced back in the triple jump to win Ukraine’s first gold of the championships. She did so with a big PB and European lead of 15.02m in round five after a 14.81m opener.

She had finished second in the World Championships, having previously won world and European medals in the long jump. During her competition she was even able to congratulate the two 400m hurdles medallists.

“I am really happy with 15 metres and today is a big evening for Ukraine with three medals for us. For all Ukrainian people, we need positive emotions and these victories. I jumped for them.”

Kristiina Makela capped a great day for Finland after the men’s steeplechase victory on the same evening, producing a national record 14.64m for silver, while Israel continued their best ever Games with a bronze for Hanna Minenko with 14.45m.

Britain’s Commonwealth medallist Naomi Metzger had a great competition to finish sixth with her opening jump of 14.33m – just 12 centimetres from the medals.