There was a time when clearing a bar almost five metres above the ground was the very least of Holly Bradshaw’s traumas. Turning 30 since that night in Tokyo when she added Olympic bronze to her collection of pole vault medals, the Lancastrian displays the confidence of her achievements and the wisdom of age.

Yet when the teenage Miss Bleasdale was beckoned to the front of her class in school, the only leap she craved was one which would immediately propel her back towards the shadows.

If not for athletics, she may have remained cosseted in her shell rather than embracing the opportunity to compete with billions watching on. “I’m a different person,” she adds.

“The fact that I can stand up in front of people and give motivational talks – even just talking to you like this – once upon a time, I would have been like, ‘there’s no way I’m doing it.’ And I think athletics and sports can be massive, and help people in so many different ways.”

Nevertheless she has grave concerns about the threats that can lurk, especially to impressionable young women who witness the glamour and are seduced by a lifestyle curated online. A lifestyle fuelled, unwittingly or not, by endorsers and brands keen to capitalise on these pictures of health.

I recall one teen prodigy who, in recent times, was handed an £80,000 contract on the grounds of their potential to shift apparel. A fine junior, but with no CV beyond, it reflected the rise of the influencer and a business model where Instagram and TikTok posts are not just a means to share insights but strict contractual obligations with income attached.

Bradshaw believes the imagery encouraged has the potential to harm. “I like that people might think of me as the ‘girl next door’ and a realistic role model,” she says. “I have my hair scraped back, I don’t wear make-up, I’m out there just competing in what’s practical. I’m comfy in shorts covering up my stomach, wearing a vest. I’m out there, I’m sweating, I’m a normal person just trying to be awesome at pole vault.

“In sport in general but athletics as well, you see girls out there wearing lipstick, face full of make-up, skimpy outfits. Maybe they are comfy, maybe I’m wrong, but if you do it so that you get more followers, therefore you get more sponsors, you get more money … that’s now being rewarded rather than ‘look at that girl out there competing’.

“Go back to the Denise Lewis era and the Sally Gunnell era … no one’s looking at what they’re wearing, or how they look. They’re like, ‘these girls are freaking awesome, because they’re winning Olympic medals.’ And it just doesn’t feel like it’s like that now.

“This isn’t me going ‘boo hoo, I haven’t got any sponsors, I’ve only got 18,000 followers on social media’. This is think of the damage this is doing to 12-year-old girls at home who are looking at these athletes and thinking: ‘I can’t look like that – how am I ever going to be in sport?’”

She knows their testimony from first-hand experience. From when she pushed back when the British Olympic Association, ahead of Tokyo, initially told female competitors that one-pieces were not part of the manufactured kit. 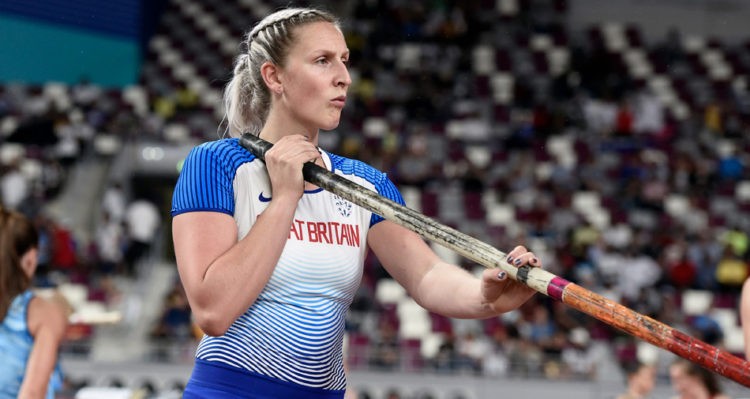 Bradshaw has confessed openly to body image issues around her stomach dating back to her youth. And she recalls: “When I spoke out about the onesie and everything, the saddest thing for me was having young girls message me on Instagram, saying: ‘I went through this exact thing. That’s why I quit.’

“They were saying, ‘This is why I don’t do athletics anymore: because I don’t want to have my belly out.’ And there was no other option. That is why I’m speaking up: to try and change it for those girls.”

It formed part of Bradshaw’s internal monologue when she and her husband Paul had time to sit down over the winter, to reflect and celebrate but also to ponder whether she would continue onward to Paris 2024.

Her greatest ambition realised, there was an immense temptation to wave farewell. “Because I know exactly what I want to do after I retire,” she says. “I want to start a family, move back home, I’ve got a big passion for sports psychology, which I can do as a job, so it would be really easy for me to do that.

“But I sat down with my husband and he said: ‘You can’t retire. You’re on a roll. You have more to offer the sport.’ I felt the same.”

Her own psychologist was the other sounding board. Bradshaw admits to a simple curiosity of what she still might unlock, despite sitting out the spring’s indoor campaign through injury.

“If I come to the end of Paris and I haven’t achieved anything more, I’m not going to be gutted. I’m just curious as to what else can I do now and I’m in such a good place mentally.”

She would love to help others reach a similar frame of mind.

“It’s part of my journey now for the next few years,” says Bradshaw, who will be competing at the Müller Birmingham Diamond League on Saturday.

“50 per cent of it is, what can I do in terms of performance? 50 per cent is, how can I make a difference in people’s lives? How can I educate athletes to help them stay in school? How can I help younger athletes who deal with body image stay in the sport?

“That’s just as important for me now as the performance element.”

» This article first appeared in the April issue of AW magazine, which you can buy here