Paralympic and world gold medallist opens up about unique experience on Celebrity SAS: Who Dares Wins

Jonathan Broom-Edwards has pretty much seen and done it all in the world of athletics.

The 34-year-old, who has a personal best of 2.15m in his beloved high jump, has won Paralympic gold and silver, four world – including one gold – and two European medals in the discipline.

After finally become Paralympic champion last year in Tokyo, he was invited to star in the current series of Celebrity SAS: Who Dares Wins.

Filmed out in Jordan, the programme was so difficult that Broom-Edwards describes it as the “hardest thing I’ve ever done.”

Speaking exclusively to AW, the high jumper opens up about the physical, mental and emotional challenges he faced during the series.

“Of all the TV shows out there I think it’s one of the most real ones you can do and that’s partly why I wanted to do it as it’s not stop start, once you’re in you have to survive,” he says. “There are no retakes and what you go through is real. It was one of the best experiences of my life.

“It’s not really comparable [competing on Celebrity SAS to winning a Paralympic or world high jump gold medal]. I train day in day out for the high jump and you have very specific movements, drills strength and speed qualities and you’re working on performance. It’s quick bursts of speed and then recovering.

“It’s challenging your mind and some of us pushed ourselves through pain and discomfort ahead of going on the show, so we were better prepared for it. Fortunately, for us sportspeople we have that adaptability and recovery in our bodies.”

Broom-Edwards is one of a number of athletes from track and field on this year’s series, including double Olympic javelin medallist and world and European champion Fatima Whitbread as well as world 100m bronze and European silver medallist Dwain Chambers.

With contestants being subjected to shark-infested waters, hair-raising cliff faces and sleep deprivation, such comradely is vital to getting through each challenge.

One experience sticks in Broom-Edwards’ mind.

“In the evenings there were so many times we got into our sleeping bags and then we were dragged out back onto the square to do beastings,” the Paralympic high jump champion adds.

“You also had to do sentry duty and I swear it was the coldest I’ve ever been. We were subjected to a cold plunge pool but that day we also jumped out of a helicopter and that day my sleeping bag and dry clothes got wet because I hadn’t sealed the airtight bag in it enough.

“We were in a desert which was freezing at night and I was out there for more than three hours and couldn’t sleep because I was so cold. I remember waiting for the sun to peak out over the horizon so I could keep warm.”

In a world dominated by digital output and social media, it was also a chance for Broom-Edwards to strip everything back and focus on the things that matter in life.

“Do you know what, it was incredible to go through that though,” Broom-Edwards reflects. “All your creature comforts are gone. The only things that I had were my toothbrush and toothpaste, a bar of soap and some foot powder. That was it. The water ran out, so we had to clean our teeth in the shower and then that started to go as well.

“We all went to the toilet openly in front of everyone and we had to go in pairs. The dignity just went but do you know what that created such a bonding experience for us together and we full on rallied to get each other through it.” 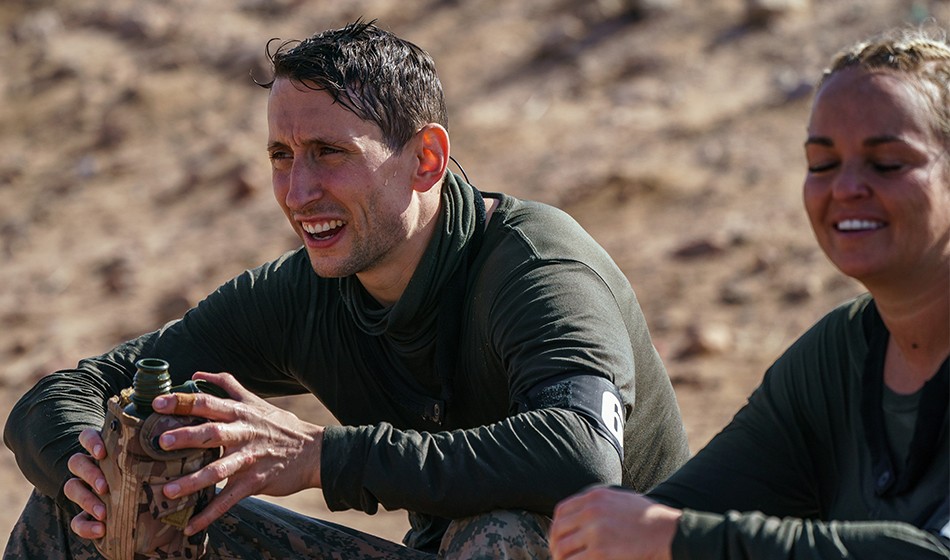 One element of Celebrity SAS: Who Dares Wins is when each person has their personal life examined by the DS’ – otherwise known as Directing Staff. Upon arrival to a secluded room, they’re hooded up and their face is only revealed once they are sat down to be interrogated.

Celebrities are quizzed about their background for the DS’ to gain context on decisions that they make during the tasks and how they interact with people.

“When I get to the showcase part of the programme you’ll get to hear more about my story, where I’ve come from and my disability,” Broom-Edwards explains. “I was only interrogated once but there was enough to tell the audience.

“It’s a chance for the DS’ to dig deep into our psyche and maybe the traumas we’ve got in us. We’re full on hooded up, you can’t see where you’re going and when it’s taken off, you’re in front of the staff.”

Broom-Edwards’ was born with congenital talipes equinovarus – commonly known as clubbed foot – which left him with muscular dystrophy of his calf muscles and meant the range of motion in his left ankle was restricted.

He didn’t think it was a disability but as his left leg didn’t grow as much as his right one, it became apparent he couldn’t use his left foot in the normal fashion.

Given he is 6’2, you won’t be surprised to know that he took up basketball. That also became an escape for Broom-Edwards. 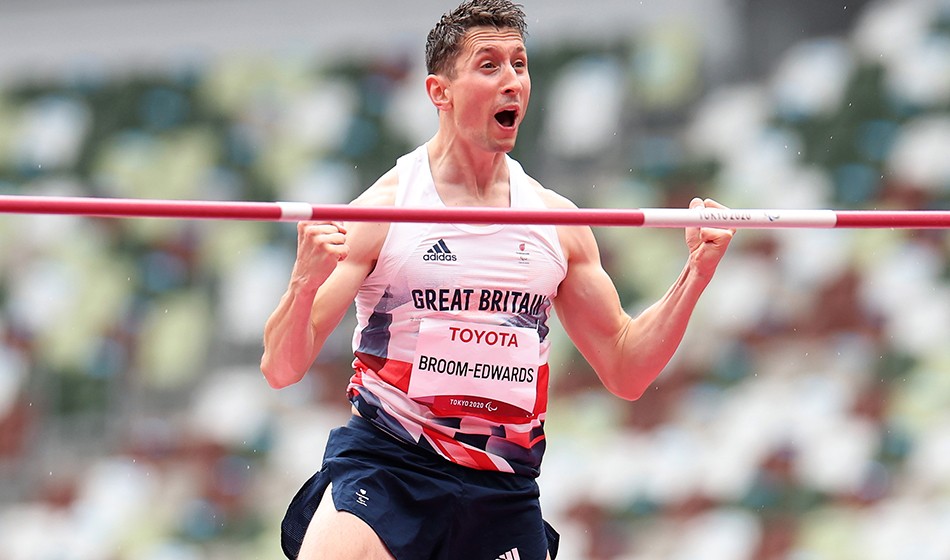 “I tried to hide it [club foot] as I felt shamed and embarrassed and I was self-conscious,” he says. “Basketball helped as you’ve got nice long shorts and big high boots so it meant I could help hide it. The sport became a passion when I was younger. I got on with life and then it was a weird transition to Paralympic sport.

“I was spotted by a sports massage therapist when I did a little bit of high jumping at my third year at university, and he suggested I could classify at the Paralympics. Seeing London 2012 and the high jump being won by a guy who had the same condition as me [Maciej Lepiato] made me think I could compete.

“Since 2013 it has been a whirlwind of a journey and going into Paralympic sport meant that I went from hiding my disability to the whole world seeing it.

“I wasn’t aiming to make the Paralympics. I never thought I’d be an Olympian as my left leg didn’t work well enough, but sport and athletics changed my life for the better. It allowed me to realise my potential, made me think I could achieve and actually took me away from bad situations in life.”

Battling through such adversity to achieve the pinnacle within Paralympic sport meant that it was almost a foregone conclusion that Broom-Edwards would be asked to go on Celebrity SAS: Who Dares Wins. 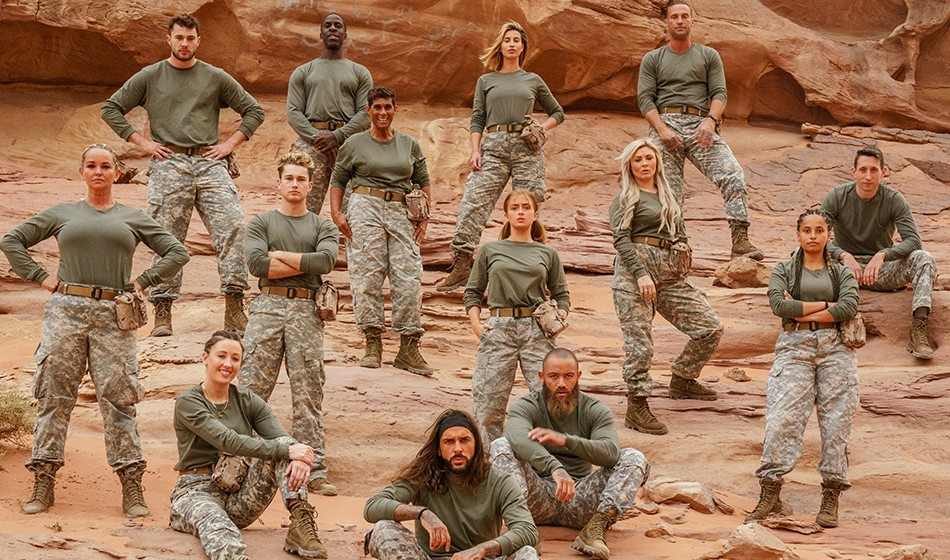 He is one of a number of Paralympians to feature of reality shows such as Hannah Cockroft on Celebrity Bake Off, Hollie Arnold on I’m A Celebrity Get Me Out Of Here and of course Aled Davies on the previous series of Who Dares Wins.

Given the Olympics and Paralympics comes around once every four years it’s an opportunity for athletes to showcase themselves in a different light and reach a much broader audience than those in track and field.

Is it something which is good for athletics?

“It’s not the first time I’ve thought this [getting more recognition from SAS Who Dares Wins than winning Paralympic gold],” Broom-Edwards adds. “It’s a week in Jordan versus 10 years I was slogging away so that I could turn Paralympic high jump silver into gold.

“That journey though led me to this. We always like something shiny and there’s a filter on life where everything has to be perfect and the best. The transition from going to gold made me get this opportunity.

“Does the sport need it? Well, it does need something. What sportspeople do in athletics is inspiring and what they put themselves through will inspire a nation. It needs to be showcased more and I hope that my involvement in this show, having a disability, actually does inspire those who have impairments.”