By Jack Tiernan: Ryan Garcia is picking Gennadiy Golovkin to defeat Canelo Alvarez tonight by an upset in their long-awaited trilogy fight on DAZN pay-per-view.

It probably won’t make Canelo happy learning that his former gym-mate lightweight Ryan Garcia is picking against him, but he says he’s just being objective about it.

Canelo’s anger isn’t going to help him tonight because it’s just going to lead to him gassing out quicker.

As many boxing fans already know, Golovkin has given Canelo pure grief in two fights and arguably should be up 2-0 going into tonight’s trilogy match.

What’s troubling about Canelo is the fact that he’s in denial about his recent loss to Bivol. Instead of admitting that he was beaten by the better man, he’s made excuses about something going wrong in training camp that prevented him from putting out 100% effort.

“I already said this before. I would think that Canelo would beat him in the past for the third time, but with the way I see things, the way they are, I would give the edge to Golovkin for one reason,” said Ryan Garcia to DAZN.

“Both of those fights were good fights. It’s not like Golovkin was ever out of the fight, but two, Canelo is coming off a loss [to Dmitry Bivol] and looks very angry. He looks out of focus, and it’s not really his character from the past.

“But then again, he can bring it all together and knock the guy out. To me, I wouldn’t be surprised if Golovkin wins. So I’m going to go with the underdog this time around, but it’s nothing towards Canelo. It’s all just boxing objectiveness,” said Ryan.

“It’s the greatest rivalry in than any rivalry we’ve seen in the last five, ten, fifteen years, going back to the days of [Marco Antonio] Barrera against [Erik] Morales,” said Eddie Hearn to the DAZN Boxing Show.

“It’s the closeness of the fights, and it will be a close fight. There is no way this fight will be one-sided,” said Hearn. 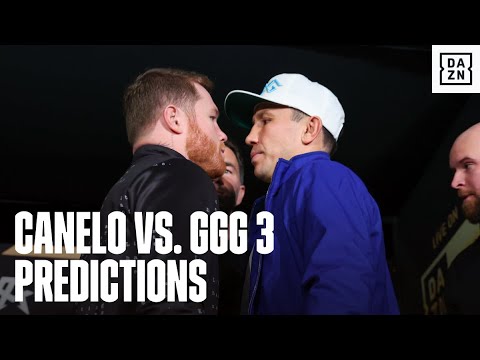