By Robert Segal: Gennadiy Golovkin says he felt “sad” for Canelo Alvarez watching him lose to Dmitry Bivol last May.

Golovkin states that Canelo (57-2-2, 39 KOs) is such a big star in boxing, and yet he looked so “horrible” in his loss to WBA light heavyweight champion Bivol.

Canelo definitely did look “horrible,”  as Golovkin says.  What was bad about Canelo’s performance was his focus on throwing single shots and how tired he looked after the first two or three rounds.

The Mexican star wasn’t going to beat a fighter like Bivol, throwing only single shots because his defense was too good, and punch resistance was outstanding as well.

What Golovkin finds amusing is how Canelo thought he’d won the fight at the end. Canelo said recently that he believed he’d won five or six rounds in the first half of the fight, which explains why he thought he’d done enough to deserve the victory over Bivol

“I feel very comfortable because I’m so excited for the fight, and I feel great,” said Gennadiy Golovkin to DAZN Boxing. “The last 12 years, I’m still a champion at 160. Right now, I have three belts at 160. I don’t have a chance,” said Golovkin when asked why he didn’t move up to 168 years ago.

“Not all fight. Just highlights,” said Golovkin when asked if he watched Canelo’s last fight against Dmitry Bivol. “I’m so sad for Canelo. He’s so big star from boxing, and he looked so horrible.

“He’s 32 years old. Every fight is different. You wake up and have a bad day,” said Golovkin when asked if Canelo is the same fighter he once was.

“Yeah, I hope everything has changed because Bivol showed everybody that it’s possible [to beat Canelo] to beat him by a decision. I know Canelo doesn’t like the decision [for Bivol fight]. He says, ‘I win.’ Come on, guys. Wake up.

“Everything is possible. This is boxing,” said Golovkin on whether he could knock out Canelo. “This is the next level. People say, ‘Why don’t you knock him down?’ This is the highest level. I know him; he knows me. It’s hard.

“I have plans for 160. So many countries,” said Golovkin when asked how many years left in the sport. “We try. First, my focus is on this fight, and then we’ll talk to you later.

“I don’t know. I want to tell you the business side. Who brings in more interesting big name. You got it,” said Golovkin about whether he’ll stay at 168 after this fight.

“Great fight. It’s the biggest gift for fans,” said Golovkin when asked how his fight with Canelo plays out. ”

“It’s a different school,” Golovkin said about the difference in his trainer Johnathon Banks and his previous coach Abel Sanchez.

“I was ready for a third fight. I don’t know why everybody waits four years. I remember my first fight and my second fight, and right now, we have a trilogy.

“The trilogy is a completely different story. I hope it’s like the same as the first and second fights. Like a nice big beautiful fight. I have more experience, and Johnathon showed me more stuff. I try to show you this weekend.

“I feel like a 40-year-old,” said Golovkin when asked what it feels like to be 40. “I like my age, my experience, my life experience. I like what I have right now. How I feel right now. I feel very comfortable.

“I don’t know exactly why,” said Golovkin about why things are bitter between him and Canelo. “I shake his hand like everything is good, and after again, he stays so quiet in the last four years. 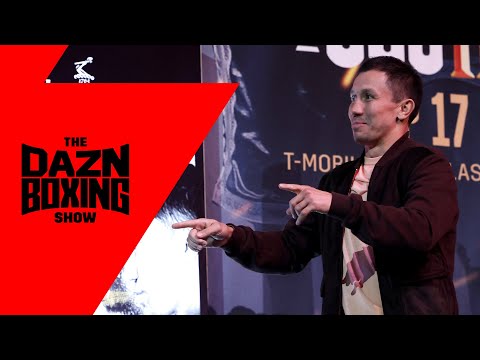