Brian Hewson, who represented Great Britain at the 1956 and 1960 Olympics and won European 1500m gold, has sadly passed away at 89.

The middle-distance runner also claimed two Commonwealth silver medals over 880 yards in 1954 and 1958.

His best placed finish at the Olympics was fifth in the 1500m final at Melbourne 1956, after he had led into the final straight.

Hewson was also one of the first men to run a sub-four minute mile, clocking 3:59.8 at the White City Stadium in 1955.

Finishing third to László Tábori and Chris Chataway, he became the first person in history to run a mile in less than four minutes and not finish in the top two; before that race, only Roger Bannister and John Landy had run a sub-four minute mile.

Born in Croydon, Surrey, in 1933, Hewson went to Pollards Hill Junior School in London, and continued his education at Mitcham Grammar School, where he started running. Aged 16, he trained in tailoring at the Regent Street Polytechnic.

In 1947 he began to run quarter miles and won the Mitcham Schools Championship. Cecil Dale of Mitcham Athletics Club witnessed this win and awarded Hewson a scholarship to Mitcham A.C.

The teenager was then introduced to Frank Drew, to coach him at the club. In his first year as a junior, Hewson won the A.A.A. Junior 880 yards title in a record time of 1:55.3.

In April 1955, Hewson’s coach Drew died so he was then introduced to Austrian Franz Stampfl. He coached Chataway, who went on to win European 5000m silver in 1954 and then served as a Conservative MP. 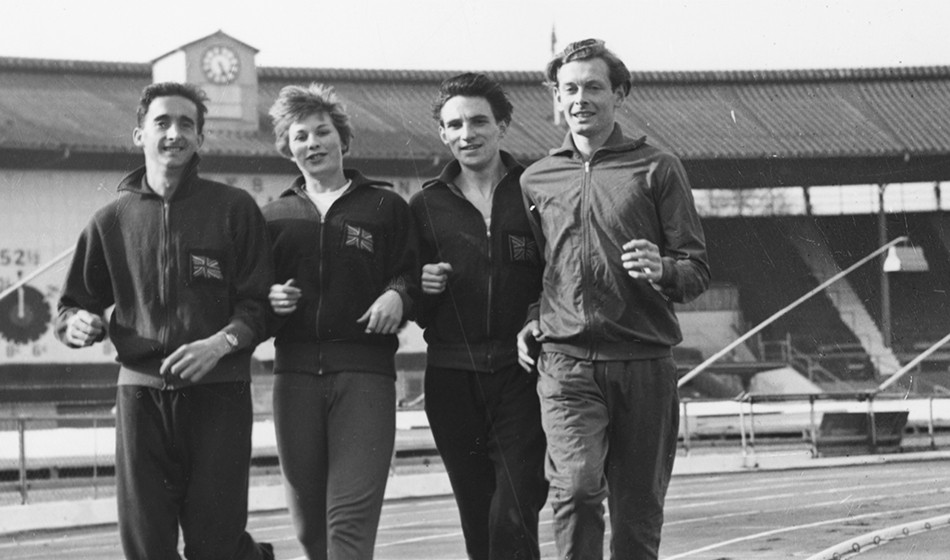 Hewson’s best season was in 1958. He won a gold medal at the European Championships and produced his best times over the mile and half mile and their metric equivalent times.

He was the fastest-ever Englishman over 880 yards, running a personal best in 1958 of 1:47.0. Only Derek Johnson had run faster over 800m and Bannister and Derek Ibbotson in the mile.

With a time of 3:41.9 in Stockholm, Hewson won the biggest prize of his career as he became European 1500m in the Swedish capital.

At the 1960 Olympics in Rome, Hewson damaged a calf muscle six weeks before the event. In his 800m heat, he led for 700m of the race before three runners passed him, hence he finished fourth and was eliminated from the final.

Hewson retired from athletics after those Olympics and continued working at Simpson’s of Piccadilly, as a tailor, before setting up his own tailoring company in the East End of London.

Clothing, sport, fashion and retailing shaped his working career, and he became a women’s fashion buyer for English Lady and subsequently sportswear and sporting goods buyer for Debenhams. He then joined the Incentive Group where he was involved in the design and manufacture of corporate uniforms for major UK multi-national companies.

Hewson was married to Marion, father to James, Caroline and Charles, stepfather to Tim, Sally, Robert and Penny and was a much loved grandfather.