Wilder Apologized To Helenius For Knocking Him Out: “I’m Sorry” By Adam Baskin: Deontay Wilder paid a visit to Robert Helenius last Saturday night to check on him and to apologize for knocking him out in the first round in their main event fight on FOX Sports pay-per-view at the Barclays Center in Brooklyn, New York.

Deontay was choked up with emotion after the fight, feeling bad about what he’d done in knocking out his old sparring partner & friend, Helenius.

Seeing Helenius on the canvas, badly hurt, upset former WBC heavyweight champion Wilder deeply, taking away much of the joy that he would have had.

Helenius (31-4, 20 KOs) never got the chance to try and win due to the movement that Wilder used to keep him from landing his hard punches.

After throwing only two punches in the round, Wilder sprang, landing a single right hand that detonated on the chin of the 38-year-old Helenius, knocking him unconscious on the spot. The rest was history. 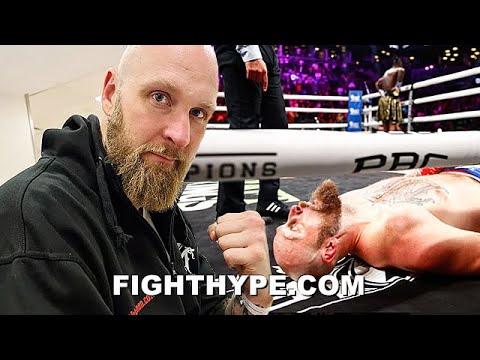 “Don’t be sorry. This is your time; I’m out. I’ve been doing this for 25 years. Thanks for the opportunity,” said Helenius in response to Wilder.

Hopefully, for Helenius’ sake, he made enough money from the Wilder fight to retire to his home in Finland without ever needing to fight again. That would be ideal for Helenius, as he’s not likely to get an opportunity like this again.

Whatever remote chance #2 WBA Helenius had of getting a title shot is now lost with his knockout defeat against Wilder. The high ranking that Helenius has with the World Boxing Association will disappear, and he’ll be dropped down, possibly near the bottom of their top 15.

Helenius replied: “Don’t be sorry. This is your time, I’m out, I’ve been doing this for 25 years. Thanks for the opportunity.” pic.twitter.com/tBiH9C3So2

Boxers are modern-day gladiators, and it’s got to be tough when they got up against someone that they’ve trained with many, many times, as we saw with Wilder battling Helenius.

The only good thing that comes out of this fight is that Helenius likely made good money, given that the fight was on FOX Sports PPV. If the fight brought in good pay-per-view numbers, Helenius could do quite well, depending on if his deal was a portion of the PPV upside from the contest.

Helenius still has the power, size, and ability to compete with the top fighters in the division. Obviously, he and his team need to choose wisely when picking opponents from this point on.