George Kambosos: “This Is Not The End, I Will Be Champion Again” By Robert Segal: George Kambosos Jr (20-2, 10 KOs) insists “this is not the end” of his career following his defeat against undisputed lightweight champion Devin Haney (29-0, 15 KOs) last Saturday night in Melbourne, Australia.

It might be a good idea for Kambosos to move down to 130 because there will be opportunities for him to win a belt in that division now that Shakur Stevenson is moving up to 135.

Kambosos is small for a lightweight, and he would be perfect for the super featherweight division. Granted, the paychecks would likely be smaller at 130, but Kambosos can make a lot of money on pay-per-view in Australia if he picks up another belt.

It doesn’t matter what weight class Kambosos wins a title. He’ll have his Aussie fans eager to see him fight regardless of which weight class he’s competing in.

The always-confident Kambosos believes that he’ll be world champion again, perhaps after Haney vacates his four belts at 135 and moves up to 140 soon. George feels that Haney, 23, doesn’t have much time left at lightweight because of his size.

Once Haney vacates his titles, the belts will be fragmented, and Kambosos can go after one of them, assuming he’s ranked high enough when that time comes.

Kambosos talked about wanting to take time off from boxing after his loss to Haney last night, but he can’t afford to take a long break if he wants to get ranked high with one of the four sanctioning bodies.

Currently, Kambosos is ranked #3 WBC, #5 IBF, #5 WBO, and #6 WBA. That ranking is obviously going to drop with Kambosos’ 12 round unanimous decision loss to Haney last Saturday night at the Rod Laver Arena in Melbourne.

What Kambosos needs to do is get back in the gym soon and look to pick up a win over Isaac ‘Pitbull’ Cruz, William Zepeda, or Rolando ‘Rolly’ Romero. Kambosos has to move fast because Shakur Stevenson, a newcomer at 135, will be going after the soon-to-be fragmented belts. The last thing Kambosos needs is to be tangling with Stevenson, who is arguably a better version of Haney.

“I don’t know how much more time he has at 135. He’s big, he’s rangy, he’s a good fighter,” said Kambosos Jr at the post-fight press conference last Saturday night after his loss to Haney.

“I think he might move to 140,” Kambosos said about Haney. “God willing, that opens some doors for us. I’m a big, big name. I showed that warrior spirit. You lose a fight, but you bounce back. I will be champion again. This is not the end. There are some big fights out there for me.

“I gave it my all. I had a fantastic camp, no excuses. We could have taken some easy fights and milked it a bit, but we took the risk. I believe with my speed, and my counter punching, the smart aggression, anyone at 135, I’d have competed and give them a hell of a fight.

“I think I need to rest,” said Kambosos when asked if he thinks he can conquer the world again. “I had three big fights in a year. I had Teofimo Lopez in a war, and obviously me, and Haney in the first fight, which wasn’t a war, and this fight, another war,” said Kambosos. 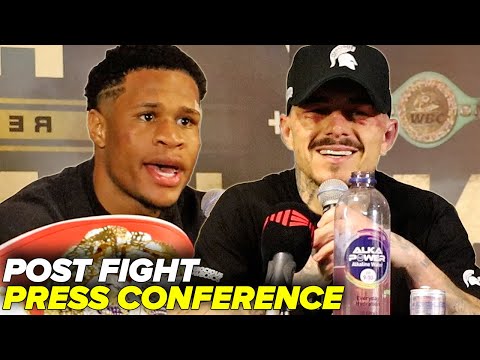