By Dan Ambrose: Devin Haney says he’s ready for anything that former unified lightweight champion George Kambosos Jr brings to the table in their rematch on October 16th.

Haney (28-0, 15 KOs) is getting ready to fly out to Melbourne, Australia, to defend his undisputed 135-lb championship against the always confident Kambosos Jr (20-1, 10 KOs) at the Rod Laver Arena.

Kambosos, 29, is getting a second chance after losing his beautiful belts to Haney last June in 12 round unanimous decision defeat in front of a large crowd at the Marvel Stadium in Melbourne.

The way that Haney dominated Kambosos, it’s going to be difficult for the Australian to make the needed adjustments in his game to come out victorious in the rematch.

If Kambosos had more punching power and hand speed, he could potentially hurt Haney as Jorge Linares did.

At this point, Kambosos isn’t going to suddenly transform himself into a puncher like Gervonta ‘Tank’ Davis or Ryan Garcia, which is what he would need to have a shot at beating Haney.

If not for that, Haney would have moved on to a bigger fight against the likes of Isaac ‘Pitbull’ Cruz or Vasyl Lomachenko. Those are two guys that Haney wants after his rematch with Kambosos.

“Obviously, he’s going to come in with a better game plan, so I’m going to need to be better than I was last time,” said Devin Haney to iFL TV about his October 15th rematch with George Kambosos Jr.

“Life hasn’t changed. Of course, I have the belts. It’s obvious. I worked hard for it, and I knew the time would come, so nothing has changed,” Haney stated. “It’s still the same. It’s still tunnel vision. Now it’s time to defend and come out victorious.

“I knew if I stuck to the game plan and worked on the things that worked on in the gym, the fight would be easy,” said Haney about his victory over former unified 135-lb champion Kambosos Jr. last June.

“I can’t say what he can do differently because I have all the answers for anything he brings to the table. We’ve been studying him like crazy. We know what he does. We know the mistakes that he makes and the habits that he has.

“We know the things that he does good as well. So we’re prepared for anything he brings.

“I thought that s*** was funny,” said Haney when asked about his thoughts on Kambosos making an excuse for missing weight on his first attempt last June.

“We got to see,” said Haney when asked if he could stop Kambosos. “He’s a tough guy.” 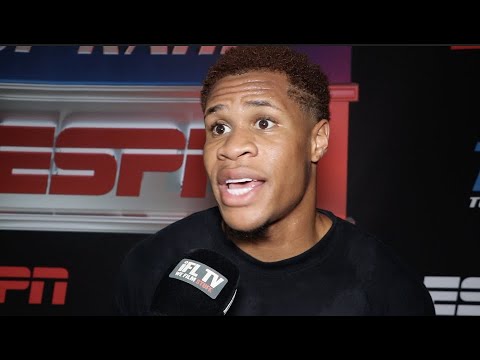