Caleb Plant Not Interested In David Benavidez Fight At This Time By Dan Ambrose: Caleb ‘Sweethands’ Plant says he’s focused on getting the “biggest fight” he can should he be successful tonight against Anthony Dirrell at the Barclays Center in Brooklyn, New York.

When #3 IBF, #3 WBA Plant (21-1, 12 KOs) was asked if he was planning on fighting WBC interim super middleweight champion David Benavidez, he brushed off the topic, saying he’s only “focused” on the fight in front of him against 37-year-old Dirrell next.

The way that Plant talked, it appears that he’s changed his mind about wanting to fight Benavidez (26-0, 23 KOs) or Jermall Charlo and, instead, will look to climb the IBF & WBA ranks to get a rematch with undisputed super middleweight champion Canelo Alvarez without taking a risky fight that he could lose.

There aren’t a lot of boxing fans that want to see a rematch between Canelo and Plant right now, given that the Mexican star already knocked out ‘Sweethands’ in the 11th round last November.

It doesn’t matter if Plant beats the aging washed-up Anthony Dirrell tonight. If Plant isn’t going to fight a quality fighter like Benavidez or Jermall Charlo erase the image of him in the fan’s eyes of him getting knocked out by Canelo, people aren’t going to watch to see a rematch.

In other words, Plant has got to do a lot more than beat up a washed Dirrell for fans to watch to open up their pocketbooks to pay to see him and Canelo fight a rematch.

Whether Canelo will choose to give Plant a rematch will depend on how on the Mexican star’s confidence level and the options he has. Canelo looked shot in his last two fights, losing to Dmitry Bivol and barely scrapping by 40-year-old Gennadiy Golovkin.

By the time Plant becomes mandatory for Canelo’s IBF or WBA 168-lb belts, the World Boxing Council will have ordered him to defend against Benavidez because he’s the mandatory and the interim WBC champion.

If the WBC allows Canelo to swerve Benavidez long enough for him to fight a rematch with Plant, there are going to be a lot of angry boxing fans.

Moreover, if Canelo chooses to use his still existing Franchistic tag to avoid Benavidez, he’s going to need to give up his WBC 168-lb, and he’s going to look cowardly in the eyes of fans.

It will make Canelo look incredibly weak by avoiding Benavidez to fight a needless rematch with Sweethands Plant, who doesn’t deserve a rematch at this moment.

“Right now, I’ve got a task in front of me. I’m in the killer mode right now. I’m in my heyday right now. I’m fully focused, but I’m looking forward to after this fight kicking my feet up during the holiday season,” said Caleb Plant to Fighthype.

“Right now, I’m just focused on the fight in front of me,” said Plant when asked about fighting David Benavidez. “I feel like so many times, even the name you mentioned, you get so focused on who is next, and then they don’t handle business, or they don’t make weight, or they test positive for this or that, and they never get to the fight.

“Whoever that is, you can bring them on and line them up, and I’m going to continue to knock them down until I get that rematch with Canelo.

“I feel comfortable at super middleweight,” said Plant when asked if he’d be interested in moving down to 160 or up to 175. “I know I’m going to have a shot again to become world champion for undisputed [against Canelo].

“Right now, I’m a super middleweight. That’s where I plan on staying, and there are plenty of things to do here. I will handle business in fashion [against Dirrell] and then I’ll get to the future in the future.

“He may be tough, but tough ain’t enough because we’re all tough. That’s why we’re boxers,” said Plant about Dirrell. It takes a lot more than being tough to beat someone, especially like me.

“Right now, I’m keeping my priorities straight with the task at hand, and we’ll get to that afterward. I’m excited.

“Coming off the Canelo loss, I could have taken a sparring session of a match, especially with the time since the Canelo fight, but I wanted to step right back with the biggest opponent coming off a loss.

“That might not be the biggest fight that can be made. Anthony Dirrell being a two-time world champion, I wanted to step right into that fight so I could carry that momentum that I had through the Canelo fight.

“Even though I lost, all the success that I had going up until that moment, I want to carry that moment forward in my career and beat a two-time champ and then move on to whatever is next.

“Absolutely, hands down,” said Dirrell when told that he gave Canelo Alvarez his hardest fight, including his Gennadiy Golovkin fight. “I’m sure you and millions of others would say the same thing.

“I felt that the performance I put on [against Canelo] and the success that I had was far more than the rest of them had. I’m not here to brag about who lost best.

“I wasn’t looking for his approval. I think a lot of people misconstrued that. I wasn’t asking him if I was good,” said Plant about the running conversation he had with Canelo during the month round last November.

“He said, ‘Yeah, you’re pretty good.’ Yeah, I know. You’re pretty good too.’ I really wasn’t asking him. I didn’t need his approval if I was good or not. That was me really being sarcastic.

“I know I’m good. That’s why I was able to do these things that I was doing in the fight. 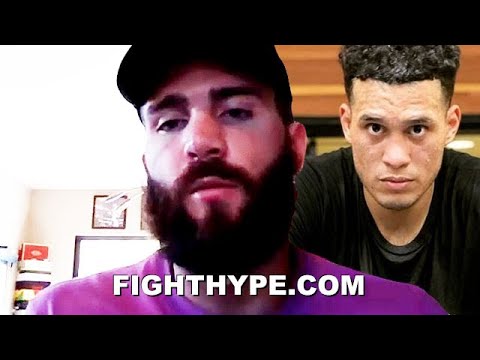