Caleb Plant: “I’m One Of The Best Super Middleweights In The World” By Dan Ambrose: Caleb ‘Sweethands’ Plant (22-1, 13 KOs) feels that his ninth round knockout win over Anthony Dirrell (34-3-2, 25 KOs) last Saturday night proves that he’s one of the best fighters in the super middleweight division.

Plant obviously has a lot more to do before he proves he’s the #1 guy at 168, as he’s already been knocked out Canelo Alvarez, and he’s fought two quality fighters in the division. The 37-year-old Dirrell was another old guy on Plant’s resume, similar to 39-year-old Caleb Truax.

Plant & his management need to show some backbone by fighting the elite contenders at 168, like David Benavidez or Demetrius Andrade.

With the talking that Plant did recently about wanting to fight Benavidez or Jermall Charlo next, you’d hate to see him settle for one of these fighters in his next fight: Edgar Berlanga, Jesse Hart, John Ryder, Daniel Jacobs.

Plant is a good contender, but he’s below these fighters in terms of talent:

“I’m here to stay, and I think I proved that tonight. I’m one of the best super middleweights in the world,” said Caleb Plant at the post-fight press conference after knocking out Anthony Dirrell in the ninth round.

“Me and my team did exactly what we wanted to do. Stay patient, and don’t listen to the crowd. Stay disciplined, say focused, and stick to the game plan. That’s what we did, and then boom, goodnight.

“I landed some nice right hands, left hooks, and I knew it [the knockout] was coming at some point. It was about staying patient, like I said and sticking to the game plan, and staying zeroed in. That’s what we did.

“I just let him know it was easy. He couldn’t do nothing with me. From round one, it was a complete shutout,” Plant said about Dirrell.  “I was doing what I wanted at will until he went to sleep.

“Feints can be a lost art. We do a lot of things in boxing. We try to stick to the art of boxing. That’s what we did tonight. We used our feints, use the jab, use the ring. I did a little bit of everything.

“I touched the body, and like I said, sticking to the game plan. I’d say it was my best knockout of my career and the knockout of the year. Any of them,” said Plant when asked if he wants to fight David Benavidez or Jermall Charlo next.

“Moving forward, I want to continue to make the biggest fights possible and keep picking super middleweights off one by one. Just reiterating what you said.

“He [Dirrell] had a lot to say about me, calling me a lot of names, talking about my race, what I’m able to do, I ain’t never fought nobody, I ain’t never hurt nobody. Well, I fought him and hurt him. Like I said in the ring, skin color don’t win fights.  What’s in here [brain] and what here [heart] wins fights.

“I feel like I did great. I hardly got touched with anything. It was a complete shutout until I dropped him. Just continue to smooth the edges in my game. I feel like I really stick to my craft.

“I worked really hard for this moment. I was just burying the beef between us, that’s all,” said Plant when asked why he was pretending why he was shoveling after knocking out Dirrell in the ninth round.

“It’s not hard at all,” said Plant when asked how hard it is to keep his discipline. “I’m a professional. I’ve been doing this for a long time at a high level.

“I’m a golden gloves champion; I’m an Olympic alternate, a former world champion, and with only 23 fights, I stepped up early in my career to fight for a world title as an underdog. I got a lot of amateur experience and international experience.

“I don’t know one specific thing, but most important was the experience,” said Plant when asked what was the most important thing he learned from the Canelo Alvarez fight. “You can’t buy experience; you can’t borrow; you have to go through fire to get it.

“I feel like I did that, and I did that with grace. I went out on my shield [against Canelo]. I didn’t just come for a check. I laid it out on the line, and it was a good experience. Now, I can take that experience with me to other big fights, and the experience is priceless. It paid off tonight.

“Knowing how he was going to react and setting the shot up. I’m not concerned with what people have said about me and what they have. If I listened to people, I wouldn’t even be at this level.

“I know what I’m capable of. In the past, people said I didn’t have power, and then they wound up standing and looking at me, for the most part, most of my opponents. If I don’t have power, then why not keep on going?

“People can say what they want. Me and my team are going to remain focused and zeroed in and continue to smooth the edges, keep working, and getting better.

“It was just here and there, the crowd getting antsy, but the crowds want to do that at times. This isn’t the first fight that has happened. Staying focused, not listening to the crowd, listening to my coaches, and doing what we came to do.

“I’ve been on a lot of FOX shows before; I’ve been in a lot of big fights before. Obviously, with my last fight and everything that came with experience over to this one, and this is a big fight as well.

“I think staying focused is a testament to my focus. You see a lot of fighters lose, and your not sure how they’re going to come back, how their confidence is going to hold up. I think I showed tonight. Not just tonight but throughout my whole life.

“I’ve always had the chance to bow out gracefully. Nobody would be mad at me after everything, but I’ve always stayed mentally strong, kept my nose down, and kept working no matter what.

“I think I showed tonight that no matter what pops up in my life, I’m going to keep my nose down and keep grinding with my team in the dark. When the lights come on, we’re going to put on a show,” said Plant. 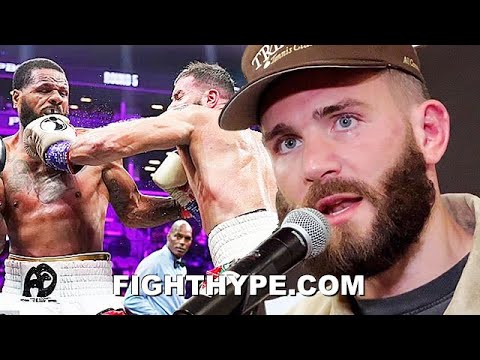