By Mark Eisner: Undisputed lightweight champ defends against George Kambosos Jr tonight in a rematch on ESPN & ESPN+ at the Rod Laver Arena in Melbourne, Australia. Kambosos’s career could end tonight if he loses badly again to Devin.

Boxing News 24 will be giving live updates & results below of tonight’s action in Australia.

Haney (28-0, 15 KOs) is talking about wanting to knock out the ultra-confident Kambosos to make a statement before potentially moving on to defend against Vasyl Lomachenko in a much bigger fight.

Kambosos has been studying the past fights of legends Roberto Duran and Julio Cesar Chavez, presumably to learn how to fight aggressively to pressure Haney better than he did last time.

“There was a lot of excitement for the first fight in Australia, as Kambosos was coming off an upset win over Teofimo Lopez,” said Max Kellerman to ESPN. “Kambosos was thoroughly outclassed in the first fight. What’s the atmosphere like?”

“It’s been a lot different, as can be expected. Kambosos had a lot of people jump off the bandwagon because he was so brash the first time around, and he didn’t deliver inside the ring,” said Bernado Osuna.

“Kambosos was kind of a flash in the pan after shocking the world against Teofimo Lopez and Devin Haney with the attitude, ‘I was born to be here.’ That’s how people see it. They see his talent and see how dominant he was the first time.

“People have really hopped on the Devin Haney train her in Melbourne to the effect that he and his dad and Devin say, ‘This is our new second home,” said Osuna.

“Haney took the titles behind a dominant jab and an outstanding overall boxing the first time around,” said Kellerman.

“For Devin Haney, it’s more of the same. If it’s not broke, don’t fix it. All he’s going to do is react to whatever George Kambosos does. In terms of Kambosos, he’s got a new team. He got rid of Javier Centeno. His father said, ‘He didn’t give the right instructions. The game plan wasn’t right.’

“It was Kambosos who didn’t make adjustments throughout the fight. So the onus is on Kambosos to change the rhythm of the fight and the way it develops. That’s why he’s been studying the likes of Julio Cesar Chavez and Roberto Duran.

“He said, ‘These are the legends that lost in their career and went on to be great. So, I can still accomplish that if I can pressure and make this great boxer uncomfortable in there,” said Osuna about Kambosos.

“Yes, if he can fight like Chavez or Duran, and he’ll do very well,” said Kellerman.

“Just the calm and the supreme confidence that he has and the fact he was born to be here. Those were his exact words to me,” said Osuna about Haney.

“He said, ‘I was sharper in camp. The four-month turnaround really helped me to stay sharp, and I was actually hurting guys in the gym, and I expect to do that against George Kambosos. The first fight, I respected him, but this time, I know he had nothing to stop me with. I’m going to go after him, and I’m going to hurt him,’” said Osuna.

“There have been examples of boxers and boxer-punchers on their way to a title in the first half of their careers were a little more safety first, and as they matured and in boxing circles, they used to call, ‘The man bones right,’ and felt more comfortable in the ring and began asserting themselves more and being more offensively dangerous,” said Kellerman.

“What stood out to you about Kambosos?”

“His quiet demeanor and the fact that he understood that he made a lot of mistakes,” said Osuna about Kambosos. “That was my first question when I sat down with him. I said, ‘What did you do right?’ He said, ‘I didn’t do a lot right. Some things I did right, I’m going to build on that,’ but he understood the mistakes he made the first time around.

“He said, ‘Look, success is difficult. I was not just a fighter that was promoted. I was a promoter; I was a politician, lobbying the government of Victoria and Melbourne to bring the fight here, and put the money behind it. I didn’t understand how overwhelming it would be.

“‘That’s the biggest difference here. The sacrifice of not being with my family and sleeping in the gym the last few weeks. That’s the sacrifice that’s going to give me the mental edge and uncertainty.’

“‘His biggest word is uncertainty. He doesn’t know what I’m going to bring. Am I going to bull-rush him? Am I going to try and jab with him?’ Whatever that he’s got planned. He’s [Kambosos] got a new trainer.

“Ultimately, he said, ‘The emperor is dead, and Ferocious is back.’ Those are all words. We’ll see what he brings to the ring,” said Osuna.

“It’s all well and good, but you’ve got to figure out what he’s going to do with Haney’s jab,” said Kellerman. “Let’s start there. Do something about Haney’s jab because he put that stick on him. That was it. That was the story of the whole fight.

“There was nothing Kambosos could do. If Haney can take care of business as expected, and when one guy wins a fight like that, most people expect him to win the rematch. What’s next?” said Kellerman.

“Devin Haney said it best when we sat down. He told me, ‘I’m kryptonite for any lightweight out there. I’m bigger, I’m stronger, I’m longer, and I got a gas tank that is out of this world,’” said Osuna.

“I think that spoke volumes to me because I was asking him about Lomachenko, and I was asking him where he saw himself. The answer was really straight and to the point. He said, ‘I’m putting everybody else out there on notice.’

“He understands that how he looks on Sunday morning here in Melbourne is going to dictate his future. He understands that if he goes out there and really puts a beating on Kambosos and does what he told me, ‘The first time was about winning the title.

“‘I’m coming to a different country, I’m risking it all, and I just want to make sure that I did what I needed to do. I outboxed him and shut him out. This time, I want to hurt him.’

“If he goes out there and does this to Kambosos, then based on what Teofimo Lopez did with Kambosos, people are going to really look at Haney and say, ‘This is next level stuff,’ and that’s what he intends to do in Melbourne on Saturday night,” said Osuna.

“That’s a good point because right now, he’s the only undefeated legitimate,  undisputed lightweight champion of the world, but I would suspect that he would be the underdog by the time the fight came off against at least Shakur Stevenson if they were to make a fight, maybe Tank Davis and maybe Lomachenko.

“Even though he’s the champion, I don’t know if he’d be favored to win some or all of those fights. So you’re right, and he’s right; it would certainly change the perception of him if he does what he told you he was going to do

“We have the rematch between Devin Haney and George Kambosos for the undisputed lightweight undisputed championship of the world,” said Paulie Malignaggi on Paulie TV.

“This is a rematch that wouldn’t be happening if not for a clause in the contract the first time around. It was a really uninspiring fight. I don’t have a problem with the way Haney fought. That’s the way Haney boxes.

“It’s up to George Kambosos to bring him out of that defensive shell, that safety first style, and force him to fight. If you’re good enough, you can force Haney to fight. 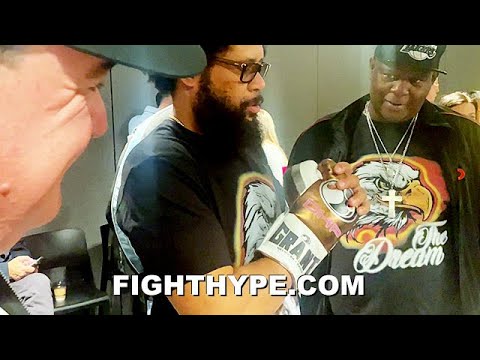