By Vince Dwriter: WBC Super flyweight champion Jesse “Bam” Rodriguez (16-0, 11 KOs) is a boxing star on the rise. He has the opportunity to make his star shine brighter on September 17 live on DAZN pay-per-view when he steps in the ring to defend his title against Israel Gonzalez (28-4-1, 11 KOs) in the co-main event on the Canelo-GGG 3 card that will take place at the T-Mobile Arena in Las Vegas, Nevada.

A product of San Antonio, Texas, Bam Rodriguez made his pro boxing debut in March 2017. After winning his first fourteen professional bouts, Rodriguez would receive an offer he couldn’t refuse. He was set to fight Fernando Diaz as part of a DAZN card in February 2022 until Srisaket Sor Rungvisai had to pull out of the main event due to illness. When Rodriguez received the call, he was more than willing to step up for the biggest fight of his pro career.

On a five-day notice, the 22-year-old undefeated boxing prospect’s name was penciled into the unoccupied main event slot to face Carlos Cuadros for the vacant WBC Super flyweight title. During the first couple of rounds of the title fight, Rodriguez used his jab and fired shots to Cuadros’s body. In the third round, Bam used angles to put himself in position to land a right uppercut that sent Cuadros down to the canvas.

During the second half of the title bout, Rodriguez took control of the match by walking Cuadros down and landing sharp combinations. At the end of 12-rounds, Jesse “Bam” Rodriguez was awarded a unanimous decision victory. Approximately four months after winning the WBC strap, Bam Rodriguez was back in the ring, making his first title defense against the hard-hitting Srisaket Sor Rungvisai.

By staying on the outside and using his boxing skills, Rodriguez delivered a dominant performance. Bam kept Rungvisai off balance by using a diversified offensive attack that consisted of angles, feints, a consistent jab, and sharp combinations. Rodriguez scored a knockdown in the seventh round when he landed an overhand left, and then he sealed the deal in the eighth round when he pinned Rungvisai against the ropes and hit him with a barrage of punches that forced the referee to step in and stop the bout.

Immediately after Bam Rodriguez’s first successful title defense, Robert Garcia went to Eddie Hearn and asked Hearn to place Rodriguez on the Canelo-GGG 3 card. Initially, Hearn stated he didn’t have room on the card, but he would later reconsider and add Rodriguez on as the co-main. By getting added to the trilogy fight card, Rodriguez receives the opportunity to showcase his skills in front of a massive audience.

The time between Rodriguez’s last fight and his upcoming bout is twelve weeks, and it is a quick turnaround, but Bam Rodriguez is aware of the fact that the opportunity to perform on a big stage like the one he’s scheduled to fight on equates to a chance to take his notoriety and his boxing career to the next level.

“I feel ever since my last two fights, I feel like I’m finally getting the recognition I deserve, and September 17 is the perfect platform to show that I’m the real deal.”

Robert Garcia has consistently stated that from a talent standpoint Jesse “Bam” Rodriguez is the best fighter in his stable. On Saturday, September 17, Rodriguez will have a chance to put his talent on display in front of a large crowd. During a recent interview with 210 Boxing TV, Rodriguez expressed his mindset going into the fight.

He knows Israel Gonzalez is a sturdy opponent, but he is also aware of the fact that an impressive performance could help expand his fan base. “I do know that he’s a tough fighter. He took Chocolatito twelve rounds, but I’m at the top of my game right now. I’m more confident than ever, and I believe I’m going to be able to make a statement and get him out of there early.” 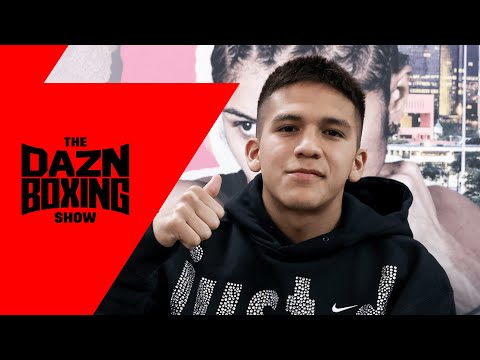