By Ken Hissner: I have met Muhammad “The Greatest” Ali, Larry “The Easton Assassin” Holmes, and “Smokin” Joe Frazier in the past.

I met Ali four times going back to 1973 in the center city of Philadelphia after his loss to Ken Norton in their first fight. Two weeks later, I saw his former home at 70th and Overbrook in Philadelphia and his then-current residence in Cherry Hill, New Jersey.

Two weeks later, I saw the address of Ali’s Cherry Hill residence and went over there, not having started writing yet. His second wife, Belinda, let me in to see Ali. He was gracious and allowed me to join him in his dining area. Ali was a most gracious host.

In 1977 at Ali’s Deer Lake training camp, I sat in a group and got my picture taken with Ali by his business manager Kilroy and looking at Ali asked, “why are you fighting all these bums?” The look on his face was like, “what you talking about, Willis? Ali had a great sense of humor. He was bright and good-looking and had always welcomed his fans there by the bus loads and entertained them!

I had met Holmes while being a sales representative for Fontana Metal Sales, stopping in at his Easton, Pennsylvania office and a local gym. One didn’t quite know which Holmes you would be received by each time. He had a dual personality. By this time, he had become the world champion in 1983, and I was promoting an event at Easton High School.

I saw his brother Mark in the parking lot and asked if he wanted to do an exhibition on the show being a seasoned pro by then and knowing I couldn’t afford his services otherwise and he said he’d like to because he hadn’t fought as a professional in Easton by that time. He then said I’d have to get his brother Larr’s approval because he was the manager.

Upon approaching Larry, he said, “I’m not putting my brother on some rinky-dink show!” Since he was the manager, I was disappointed but left his office. Later that day, I returned to the gym he sparred in and sat there watching. All of a sudden, he stopped sparring and came to the ropes pointing at me and said, “I ought to come down there and beat the s**t out of you. Next time I tell you something, don’t go to my brother!” I hadn’t, but he didn’t realize that.

Years later, at a press conference that Holmes was holding along with his partner Jay Newman I stood up and asked Holmes, “didn’t Nick Wells stop you twice in the amateurs?” He replied, “yes!” Then I asked, “you don’t really think you beat “Terrible” Tim Witherspoon and Carl “The Truth” Williams, do you?” The look on his face was one of anger.

For me, it was “payback” for threatening me years before at the gym. His partner Newman came around and said, “hey buddy, can you calm it down?” I showed him a picture of myself with Holmes and his chief sparring partner Marvin Stinson. He then realized it was me saying, “Oh, Ken, it’s you!” I replied, “you know I don’t like this guy and have waited for years for this opportunity!” That said, I skipped out before the conference was over because I knew Holmes would want to retaliate against me.

After Holmes, at 44-0, had stopped Marvis Frazier, 10-0 in the first round, he said, “that’s for the whippings your daddy gave me in the gym!” he had a really mean streak toward his daddy “Smokin” Joe Frazier. That was Holmes for you.

My first meeting with Frazier was in his North Broad Street gym in Philadelphia while watching a boxer on the heavy bag, and behind me, I heard a loud voice say, “move, or I will use you for a heavy bag!” I turned around, and it was Frazier himself. Threatened again by a former champion was I.

Frazier’s brother Tom would later ask when I was promoting fights if I would be willing to promote Team Frazier about to turn pro, and I said, “on one condition. Joe has nothing to do with it!” Tom took me upstairs to the office, and as I entered the doorway, when Joe saw me with a look of disgust on his face, he said, “is this the guy?” I looked at the time and said, “what did I tell you, and I’m out of here!”

Years later, living in Whitemarsh Township in Pennsylvania, where Frazier lived, I had the idea of throwing a surprise party honoring Joe at a local country club with the help of a local police officer Naz Galie, a motorcycle buddy of Joe’s. He was surprised and said, “but you don’t even like Joe!” I replied, “he’s the champ, and no one has to do anything for him here.” We tried for six months through his secretary with no success, and finally, Galie made arrangements through Joe’s wife to meet with her. She was thrilled.

Suddenly Joe walked in the door and asked in a loud voice, “what are you two doing here?” Galie never said a word the entire time. I told Joe about my idea, and he asked, “who’s paying for this?” When I told him his mother in South Carolina and his family would be invited for free, but the others would have to pay. He replied, “when Joe gives a party, no one pays!” I thought, “he’s not giving it, and I’m not paying for all of it. Then Joe said, “I don’t think so and started to leave out the back door when his wife Florence, standing there, asked him, “Joe, where are you going?” He replied, “I’ll be back when I’m back, woman!”

Those were my meetings, for the most part with Ali, Holmes, and Frazier. Years later, I met Joe again at a Wilmington, Delaware Boys & Girls Club, and he was fine talking to the kids.

Ali was one of the funniest human beings I had ever met, while Holmes and Frazier were not so nice in my dealings with him. End of story. 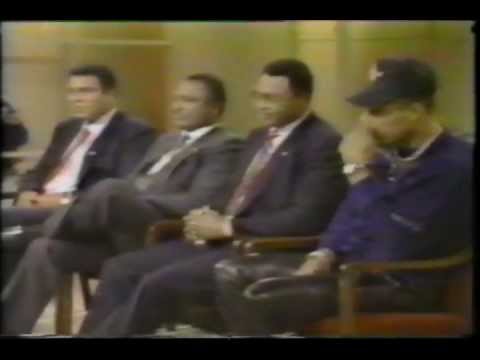