Ellis Cross: “I took no insult in being called a club runner” The surprise Vitality London 10,000 winner on the clubs and people who have helped him to maintain a long-term love affair with his chosen sport

Earlier this summer Ellis Cross defeated Sir Mo Farah to win the Vitality London 10,000 and the 25-year-old puts a lot of it down to his upbringing, training regime and mindset.

Beating the four-time Olympic champion by four seconds on May 2 brought the Aldershot, Farnham & District athlete, who was then without a sponsor, overnight fame. The part-time retail assistant paid £37 to enter the elite race and subsequently sprinted his way to a surprise victory.

Cross, inspired by his mum who is fighting a benign brain tumour, was labelled – and described himself – as a “club runner”. Given that he has represented Great Britain at the European Cross Country Championships as an under-23, twice won the English National under-20 cross-country title and twice been the BUCS 5000m champion, that description sparked a debate about the meaning of the term across social media.

He has now been signed by Head Start Management so watch out for the British 10km champion over the summer.

THAT RACE IN LONDON

It’s quite a scary feeling when you’re racing Mo Farah. A lot of people have been in that same position where you’re kind of happy to be there and it’s a privilege to be in that company. I saw the opportunity [in the closing straight], though, so I took it and off the back of it I’ve tried to grab everything in front of me.

The attention it received has not just been good personally but it’s great for the sport generally. This is a sport which deserves more attention.

I have had successful results in the past. People in the running community will obviously know who I am. I’m not the person who was out on the drinks the previous night and just decided “I’m going to turn up and beat Mo Farah”. That didn’t happen. I’m someone who dedicates a lot of time to my sport.

EYES ON THE (CLUB) PRIZE

Club level athletics is where it’s at and it’s turned me into the athlete that I am today. I’m a very proud club runner. Don’t get me wrong, the bracket we class as “club runner” is of course quite large but again it’s difficult to define that.

Everyone has different goals and ideas of what means what and I took absolutely no insult in being called a club runner. I haven’t competed on the international stage for a while and I wasn’t in the elite field, so it was right to call me that in that race especially.

Being a club runner also meant that AFD won the club prize!

My athletics journey started at primary school. I grew up in a little village called Walton just outside of Tamworth and did some local cross country races, which I loved. I continued that into secondary school and that’s when I joined my first athletics club – Tamworth AC – where I was coached by Simon King. He kept me in the sport in all honesty, as I struggled with motivation and the enjoyment of running, but he got that love back into me.

Then, through secondary school, I went down to St Mary’s in Twickenham, which is where I’m still based. I made the move to Aldershot mainly because of wanting to do relay events. This is why I love club athletics and the Southern Road Relays was the last race that I did before the 10km in London. I adore turning up for races like the National Cross Country Relays in Mansfield. 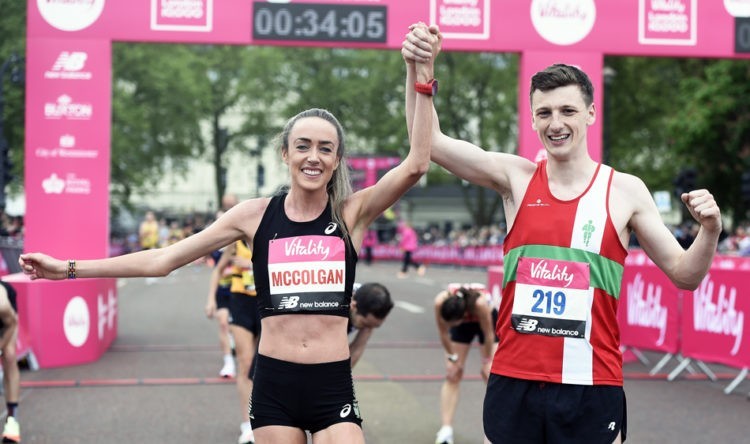 GETTING BY WITH A LITTLE HELP

Since the age of 18 I’ve been with Mick Woods. He has been such a fantastic coach and he’s always looked out for me. St Mary’s is a sister, if you like, and it’s a brilliant place for anyone looking to balance athletics and their degree.

The love and support has also been amazing. Mike Boucher is the team manager and he does so much for the sport. He was the person who pushed me into the event.

The most difficult thing for me was stepping out of university and into lockdown. It was quite a big change and transition. I tried to find my feet and I was just working.

I actually took the last three weeks off to focus on going to a training camp in Fort Romeu to prepare for the Vitality 10,000, so it would be interesting if I was able to dedicate 24 months to the sport and see what can come off the back of that.

The journey to transitioning to the professional ranks is even tougher for those guys who are on the cusp of making it, where you’ve got to make a split decision almost. Do you dedicate all of your time to your athletics career, sit in the middle or take the career route? That’s part and parcel of why you see athletes drop out of the sport.

I want to be a full-time athlete and fulfil my dream. I want to transition to the roads. It’s given me confidence as I’ve never done a half-marathon. It’s definitely not going to be one of those one-off scenarios.

The support has been immense. Not just from family and friends but also the wider community and that’s what I love about running. The messages have meant so much and I’m so happy. My mum was so proud and that means the world. It makes me happy seeing her happy.