By Vince Dwriter: Saturday night’s historic all women’s boxing card features a main event with two champions who don’t like each other, but not to be outdone, the co-main features another set of champions who also dislike each other as WBC, IBO super featherweight champion Alycia Baumgardner will face WBO, IBF champion Mikaela Mayer in a unification title match at the 02 Arena in London.

During the Sky Sports Wednesday taping of their Face-off show, the conversation reached its boiling point when Baumgardner hinted at having to earn her way through the ranks while Mayer benefited from “resources and income.” The comment brought a reaction out of Mayer as she stated, “she’s sick of the narrative.” Both fighters jumped out of their seats, and they were nose to nose until security stepped on stage and separated the boxers.

Prior to the Face-off show, both Baumgardner and Mayer used social media as a platform for trading insults. The animosity between them initially started when Alycia Baumgardner beat Terri Harper for the WBC strap. Prior to Harper’s loss, Mayer was chasing Harper for a unification bout, but when Harper lost to Baumgardner, it made Baumgardner the new target. The new champ Baumgardner didn’t appreciate the way Mayer called her out, and the incident gave birth to the ongoing feud between the two.

Another layer to the feud comes from Mikaela questioning Alycia’s contribution to women’s boxing. She also stated she had never heard of Alycia in the amateurs, and she had never heard of her in the pros prior to Baumgardner defeating Terri Harper for the WBC title. Mayer also implied that she laid the groundwork for the boxing opportunities that Baumgardner is currently receiving.

“Look how far women’s boxing has come. I always said I want to do everything I can so the next generation of girls that come up actually have an opportunity to make money, actually have a platform, and she’s proof that my work has paid off because she really has; I never even heard of her until I turned pro. She was in the amateurs, but I didn’t know about her. She wasn’t on the scene as a pro, and then she comes out of nowhere beat Terri Harper, and now she comes into the fight of her life, and a payday it took me years to make.”

During the build-up for the September 10 event, every time the boxers were in the same room, tempers flared. When it was almost time for Baumgardner and Mayer to finally meet in the squared circle and release the tension, an unfortunate event occurred as the Queen passed away, and the British Boxing Board of control made the decision to postpone the event.

Five weeks later, the stage is set for the super featherweight unification bout, and the bad blood between the two participants is still present. Mikaela Mayer (17-0, 5 KOs) has a good jab, a polished 1-2, and she can be successful in this fight if she can close the distance and make it a fight from the inside, but on the other hand, Alycia Baumgardner (12-1, 7 KOs) wants to use her speed advantage and box from the outside, yet be strategic when she chooses to fight inside the pocket.

On October 15, it will be rivalry Saturday as Claressa Shields clashes with her arch-rival Savannah Marshall in the main event for the undisputed middleweight crown, and Alycia Baumgardner faces her adversary Mikaela Mayer for the unified super featherweight title live at 2 pm ET on (ESPN+). 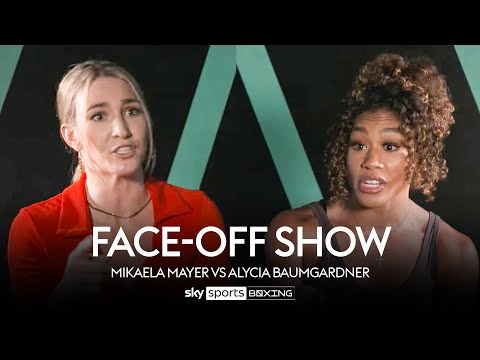