By Dan Ambrose: Tim Bradley says he expects former unified lightweight champion Teofimo Lopez to regain his self-confidence with a knockout tonight against Pedro Campa on ESPN at the Resorts World Las Vegas.

Top Rank isn’t saying it, but Teofimo’s career will be on the line tonight against Campa (34-1-1, 23 KOs). If Teofimo loses to this level of a fighter, it’s time to pack it in.

Top Rank may need to consider cutting Teofimo loose if he gets beaten tonight because it would be a sign that he’s mentally shattered from what happened to him against George Kambosos.

Teofimo (16-1, 12 KOs) lost his last fight against Kambosos Jr, and the defeat has done a number on him.

Teo has been talking crazy, denying the loss, and coming up with a wacky conspiracy theory to help explain why he didn’t have his hand raised.

“Just get rid of this guy. This is a showcase fight for you, man,” said Tim Bradley to Fight Hub TV about Teofimo Lopez’s tune-up against Pedro Campa tonight.

“It’s a confidence-booster type of fight. That’s what you do when you’ve got a guy that has been knocked off. You bring them back and give them a nice little touch. Some with a little resistance.

“This guy has already been stopped before earlier in his career. This is basically a Teofimo show. A highlight reel type of performance. That’s what I believe is going to happen. Then he’ll be back.

“Once you get a top fighter like Teo’s confidence back, once you eliminate those demons and you get in the ring, and you fight under those bright lights again after a loss, you back. If you knock them out, you’re back.

“That’s what he needs right now, a confidence booster. I think he gets it. Once he gets it, you’re going to hear a different tone once he gets that knockout. I just think he’ll say, ‘I want all the smoke.’

“He wants all the belts. He says he wants to become undisputed at 140 That guy was [Josh] Taylor. I understand he’s not undisputed. They’re trying to steer him again,” said Bradley. 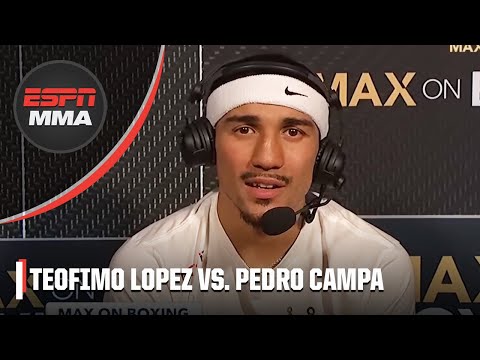