By Dan Ambrose: Ryan Garcia’s dad, Henry, sees his son defeating Gervonta ‘Tank’ Davis by knockout when the two meet up in their likely next fight.

Henry says Tank has only fought two notable guys in his career, Jose Pedraza and Mario Barrios, and he feels that Ryan would beat both of those guys.

What Henry doesn’t say is Ryan (23-0, 19 KOs) hasn’t fought anyone either, and his best wins have come against the shopworn Luke Campbell and Javier Fortuna. Those are not elite guys.

You can understand why Tank Davis has never fought anyone good because he’s promoted by Mayweather Promotions, and they’re not risk-takers when it comes to their fighters, particularly with Gervonta.

It’s fair to say that they’re satisfied with the money Tank makes fighting lesser opposition like Rolando ‘Rolly’ Romero, Isaac Cruz, and Mario Barrios. They don’t want to rock the boat by putting Tank in with someone good enough to beat him potentially.

Henry is confident that the Tank vs. Ryan fight is going to take place next. He says the major points have already been agreed on for the fight.

“I’m not going to give any details about how we’re going to win and knock him out. That’s our plan, that’s his plan, it’s not secret. We all knock our opponents out the majority of the time,”  said Ryan Garcia’s dad to Fighthype about how Kingry will go about defeating Gervonta Davis.

Ryan’s bad habit of standing straight up with his head high in the air is going to be taken advantage of by Tank almost immediately.

“I can say we’ll be well prepared, and I hope that he’s well prepared because the fight is going to be made. I’m telling you right now, that’s our next fight [Gervonta Davis],” Henry Garcia continued about Ryan’s next match.

Henry shouldn’t count his chickens before they’re hatched because there are no guarantees regarding Mayweather Promotions and Tank Davis. If Ryan’s name were Rolly Romero, then it would be a sure thing because he was an easy mark and was promoted by Mayweather Promotions.

“There is no Rolly; there is no Teo; there is no whoever else in that division. Tank has a spot, Ryan has a spot, it’s open, it’s on.  Gervonta is top-notch, but if you understand my son like I do,” said Henry. “If you put his social media to the side, which he’s very popular at, you’re going to know his skillset.

“My son’s skillset is in the high percentage, and you guys are going to see it when he fights Tank,” said Henry.

Ryan is one-dimensional in terms of his boxing skills, and the only weapon he has on offense is his left hook. His jab is weak and he’s never developed any power with his right hand. It’s almost like a vestigial feature like the arms of the Tyrannosaurus Rex.

“Absolutely,” said Henry when asked if this would be the last fight for Ryan Garcia at 135 lbs. “I think we’re going to move on from this point because my son’s tall, and he’s bringing on more weight. We have to move up.

“It wasn’t that we wanted to. It was the other side couldn’t make 135,” said Henry when asked why Ryan’s last fight against Javier Fortuna took place at 140. “We decided that it’s not a title shot, so let’s just make it at 140. So that’s how it worked out.

“My son can make that weight. He’s disciplined enough, but anything is possible in this fight [Tank vs. Ryan]. From what I understand, most of the terms have been agreed on.

“So, I don’t even know all the details, but I do know one thing. The fight is going to happen next. Again, I haven’t looked at all the details yet. The rematch clause, but I imagine if we knock out Tank, he’s going to want to come back, right?

“We’re here to win. We’re not here to say, ‘Thank you for a good fight.’ This is a real thing.

“I wouldn’t say pound-for-pound,” said Henry when asked if he views Tank Davis as a pound-for-pound fighter. “I can’t because of his size. If you look at his record, he hasn’t really gone above 135. He did it one time against [Mario] Barrios, but he right away dropped.

“But if you look at his Boxrec, he hasn’t even hit the 135 mark. What does that tell you? To be pound-for-pound, you have to go from junior middleweight to welterweight and so on.

“If you can’t go beyond 135 consistently, I wouldn’t consider you a pound-for-pound fighter. I can tell you this much. My son will be pound-for-pound.

“Pound-for-pound for me means Crawford. I would consider him pound-for-pound because he’s going in steps. I think I’m valid in saying something like that.

“But if you’re staying in one weight class just because you beat a few people, okay, that’s fine. But think about it. Who has Tank really fought? You might think, ‘Wait a minute.’ If you tell me, ‘Pedraza & Barrios,’ come on, guy.

“You don’t think that if my son fought those guys, that my son wouldn’t beat those guys? Come on. You know my son. You got to be honest.

“I like Tank; I think he’s a bad dude. I’m being honest; I’m being real, but you guys need to be real. Stop being biased or anything. I’m not saying you are but don’t think like that. Think outside the box.

“If my son fought Pedraza or Barrios, you don’t think my son would have won those titles? That’s why it’s going to be a good fight because I don’t think Tank has fought anybody as good as [Luke] Campbell. That’s a fact. 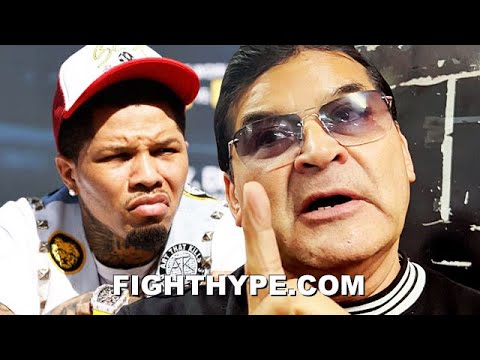