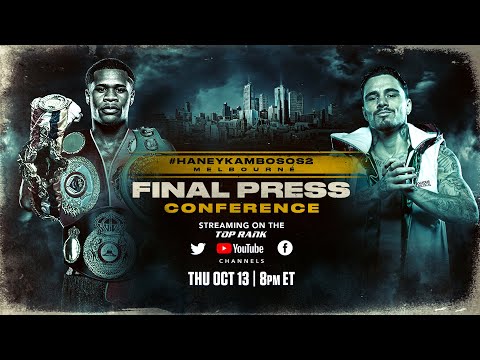 Undisputed lightweight world champion Devin “The Dream” Haney first came to Australia in June with one world title. He returned home with all the belts and is intent on repeating his virtuoso performance against George Kambosos Jr.

Haney will defend the titles in enemy territory against Kambosos on Sunday afternoon (Saturday evening prime time in the U.S.) at Rod Laver Arena in Melbourne.

The two combatants faced off yesterday, but at today’s open workout, they were kept separate. Haney (28-0, 15 KOs) received a warm reception from the local fans, who witnessed him unifying all the titles just four months earlier at Melbourne’s Marvel Stadium. Kambosos (20-1, 10 KOs) enters the rematch as the betting underdog and hopes to recapture the magic that propelled him to a stunning title-winning effort over Teofimo Lopez last year.

This is what the main event fighters had to say.

“We’ve definitely made some adjustments, learned from the first fight. Obviously, we all know he’s going to come with a different game plan. The same things that worked in the first fight may not work as good in the second fight, so we’re preparing for it all.”

“He definitely should’ve been humbled, but at the end of the day, his head got big. It got to his head.”

“I enjoy the process, every step of it. I enjoy the whole process, and I’m excited for the press conference tomorrow and the weigh-ins.”

“He’s making up every excuse in the book. He said he wasn’t going to, but now they’re saying I was holding, it was this, it was that. Whatever you want to say, he can keep saying it. The talk doesn’t matter. I’m going to go in there and do what I’m going to do regardless. No matter what referee is in there, no matter where the fight is at, it doesn’t matter.”

“I feel a lot of energy, very relaxed, very zoned in. Like I said, I’m a fighter. I’m not trying to do anything else. It’s going great, going fantastic. We’re very focused. We’re very zoned in and hungry for victory. That’s all.”

“When I went back to that dressing room {after the first fight}, my mindset changed right away. I’m a challenger again. I wasn’t upset. I’m in a familiar place, and this is where I’ve been most of my career. Doubt me? No problem. I love when they doubt me. I love when they think I have no chance. That’s OK. We’ll prove them wrong once again.”

“We’ve come with a fantastic game plan, so we’re ready for whatever. If he brings whatever style, if he’s the same style, if he brings somehow an Arturo Gatti kind of style, which I doubt very highly, let’s see. Let’s see on Sunday what he tries. Man to man, let’s fight!”

“I have a smaller team. I don’t have too much of an entourage, but I got a team I’m very comfortable with. I’m taking it old school. I’m going back to what got me there.”