By Brian Webber: Deontay ‘Bronze Bomber’ Wilder says he’d like to fight Anthony Joshua in Africa in a mega-bout in that country. Wilder (42-2-1, 41 KOs) says that he and former two-time heavyweight champion Joshua (24-3, 22 KOs) both have roots in Africa, and he feels that’s the only place that he’d be interested in fighting him.

Joshua’s promoters at Matchroom Boxing likely won’t be keen on the idea of a fight with Wilder in Africa, however, because they’ll want to maximize the revenue for this bout.

Joshua vs. Wilder will likely make more money in Saudi Arabia or the U.S than it would in Africa, so the fight has little chance of ending up in that country unless the government is willing to come up with a tremendous site fee to stage it there.

Wilder is taking a scattergun approach for his next fight after this Saturday night’s comeback clash against Robert Helenius (31-3, 20 KOs) on October 8th at the Barclays Center in Brooklyn, New York.

Deontay says he wants to challenge IBF, WBA & WBO heavyweight champion Oleksandr Usyk next if the fight is offered to him. According to Wilder, Usyk will be attending his fight this Saturday night, and he could be on a scouting run.

“All the best at the top,” said Deontay Wilder to the media when asked who he wants to fight. “I’m not going to stop. I’m picking up where I left off at. I’m going to continue to go on with that. Three fights a year; I prefer that I have three.

“You got the Usyk; you got the Ruiz, you got the Joshua; they are the top three that people want to see, especially Joshua. He’s the #1 fighter in the world for me. Me and him. That goes off everywhere I go.

“Come Saturday night, I don’t want people to think I’ve found a new style or anything like that. I’m just going back to the basics of things. Footwork is going to be very important.

“I don’t want to waste any time. Joshua is definitely in there. Whoever you can name is in there. I can name a lot of names, but there are a lot of people that agree and disagree,” said Wilder. 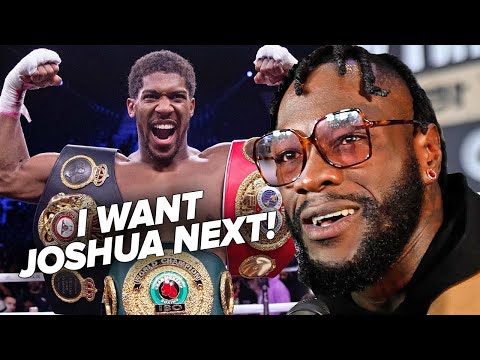