By Robert Segal: Deontay Wilder is ready for battle against the always-tough Robert Helenius this Saturday night in their headliner on FOX Sports PPV. Wilder is entering a new phase of his career after two disappointing setbacks against Tyson Fury, and he says he wants the next three years to be fun.

Deontay (42-2-1, 41 KOs) is expected to come out fast against Helenius (31-3, 20 KOs), looking to take him out as fast as possible on Saturday night at the Barclays Center in Brooklyn, New York.

Wilder’s last fight against Fury was a fight of the year of contest that saw both guys hit the deck. Fury was arguably knocked out in the fourth round but appeared to have the benefit of a long count to enable him to get up in time.

“It’s electrifying energy here when I set foot ground here, I can feel the energy,” said Deontay Wilder to Premier Boxing Champions about being in New York for his fight against Robert Helenius on Saturday. “I ask my team if they feel the same thing, and they can feel it as well.

“It’s exciting times. How can you deny the fans and the people that are here and the love & support that they give. It means a lot to me. I appreciate the love & the support the fans give me here, and I’m ready to perform as always,” said Deontay.

“You do so much in sparring to sharpen each other’s tools, but this is the first time we’ll be able to enter the ring where it really counts for each other. I’m looking forward to it.

“I’m willing to do whatever I have to do to make sure things get done, and I’m sure he is too. On the night of the fight, may the best man win.

“When the Bronze Bomber is in town and in the arena, I put a**** in the seats, but the thing about it, they’re at the edge of their seats because they don’t know what’s going to happen. But when it happens, bam, baby, good night.

“This camp has been exciting. You can go for so long and do so many things the same for so long that it becomes boring, but we made things interesting by switching locations back & forth.

“We’ve been training in Las Vegas and back in Alabama for sparring and different things like that. Things have been changed up. We’ve been doing the same things but bringing new interest and new excitement to it well.

“Basically, having fun. Trying to bring fun back into boxing and back into training. That’s what we’ve been doing. The second phase of my career is about having fun, ultimately,” said Wilder. 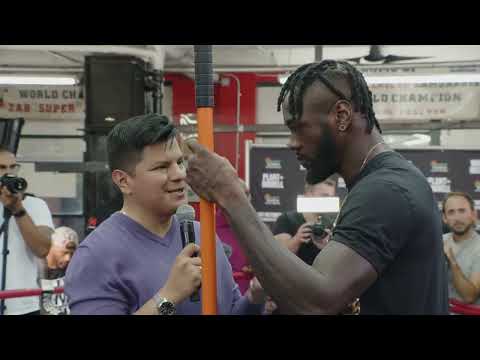