By Allan Fox: Deontay Wilder says he would like to face IBF, WBA & WBO heavyweight champion Oleksandr Usyk next if the fight is available to him if things go well for him in his contest against Robert Helenius this Saturday, October 15th.

The former WBC champion Wilder states that “whenever” Usyk is ready, he’ll challenge him for his titles. That will be an interesting alternative for Usyk in early 2023 if Fury is unavailable for whatever reason.

Fury might be still licking his wounds from his December 3rd title defense against Derek Chisora and not be ready to battle Usyk for the undisputed championship in February or March. In that case, Wilder would be the ideal opponent for Usyk to face next.

Some would argue that the smarter move for Usyk would be to first fight Wilder and then look in the direction of an undisputed clash with Fury if he successfully defeats the Bronze Bomber.

There’s ultimately more money in it for Usyk by fighting Wilder first and then Fury. Yeah, it would be risky for Usyk to face Wilder, but the same risk will be involved with him battling the 6’9″ Fury as well.

It’s hard to say which of the two fights would make more money for Usyk because Wilder has lost his last two bouts but still remains highly popular. In Fury’s case, his fan base is concentrated in the UK, and he’s not a huge name in the U.S like Wilder and Anthony Joshua.

“If I get the choice, of course, I’m going with Usyk. I’ll go with Usyk, whoop Usyk and then give Ruiz a title shot. That’s how it would work. Who wouldn’t?” said Deontay Wilder to The Good Fight with Kate Abdo when asked if he’d be interested in facing unified heavyweight champion Oleksandr Usyk next.

“We’re in this business to obtain greatness and collect belts. So if you got a champion that is giving you the opportunity to collect belts, why would you not deny it unless you weren’t ready?

“The only people that I’ve heard would turn down a title shot are those that aren’t ready. The thing is, if you prepare yourself to be ready, you won’t have to get ready.

“I only have positive things, and like I said, in boxing, I liked him at cruiserweight more. Whenever he’s ready. I ain’t got no time to lose,” said Wilder when asked when he’d be available to fight Oleksandr Usyk after the Helenius fight.

“I don’t think he wants to be in too much longer either. Me neither, so why wait? Whenever he’s ready, I’ll be ready. Most definitely,” said Deontay when asked if he could get a fight he wants by asking his management.

“Being with Al Haymon, he would advise you on certain things with the way he feels, if a fight is good or not, but the ultimate decision is up to you, especially his elite athletes. He’ll give you the opportunity.

“Some people may feel they’re worthy of more than what is offered, and then you have to go through negotiations and stuff like that. Negotiations always take the longest.

“All fighters want to fight each other, and some want to make sure the terms are right. Some of them outprice themselves on certain things. It’s a lot of complications when you’re dealing with the business of boxing. But for the most part, what you want, Al will give it to you,” said Wilder. 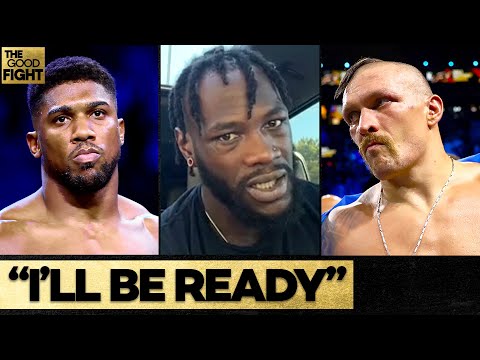