Canelo Vs. Golovkin – 1 Week To Go On Sept.17th In Las Vegas By Dan Ambrose: Canelo Alvarez and Gennadiy Golovkin meet for their long-awaited trilogy fight in one week from now at the T-Mobile Arena in Las Vegas on September 17th on DAZN PPV.

Golovkin will need to raise his game to keep from losing this fight because Canelo is fighting at a higher level right now and has been busier.

Despite having won the last fight against GGG in 2018, Canelo is coming into the third clash against Golovkin with a lot of bad blood.

Canelo is still holding a grudge for the things that Golovkin said about him in the past after he tested positive for the banned substance clenbuterol and received a six-month suspension.

“Obviously, Canelo was really cool because it was an amazing opportunity,” said welterweight prospect Vlad ‘Super Bad’ Panin to Little Giant Boxing about his sparring with Canelo Alvarez.

“He doesn’t have to do a lot, but his awareness and positioning and his punch placement. Even how he can get you in certain positions without even punching. You can feel the pressure of what he could do.

“He’s a really cool guy. I talked to him, and I said, ‘When you have me here, what do I do?’ He said, ‘It’s easy; you just do this.’ I’m just like, ‘Man, it’s crazy.’ He’s so seasoned and polished in his experience. You learn so much being in the ring with guys like that.

“Just his composure, how calm he is, and his instinct of like, ‘You know, now I’m boxing, now I’m pressing.’ I see that with all the best guys, Terence Crawford, Errol Spence, Lomachenko, and Canelo.

“It can be really slow-paced, but it’s like when you’re ready to go, then they capitalize on it, and they end the fight just like that.

“I’m starting to have that awareness now of being a finisher, and you know when a guy’s ready to go, ‘Now I can pick it up, and now we set the pace up.’ Just being around guys like that,” said Panin about Canelo. 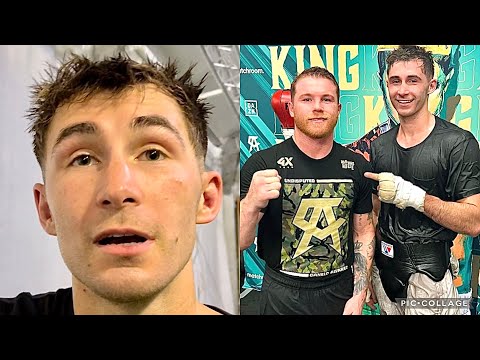