It’s questionable whether Ortiz’s management would be willing to throw him in with Boots Ennis or Keith Thurman because those fights would be risky, and there wouldn’t be much to gain. Neither fighter holds a belt, and they would be tough match-ups for the 24-year-old Ortiz.

Boots Ennis would be a really tough fight for Ortiz, and it might be a step too far for him. It’s hard to imagine Ortiz’s promoter, Oscar De La Hoya, letting him anywhere near Boots at this career stage.

“After the fight [with Michael McKinson], I was back in the gym and already running that same week,” said Vergil Ortiz Jr to Fight Hub TV. “I’m in the gym all the time. I’m always working out; I’m always staying in shape.

“I don’t have anything solid yet. The hopes are that I fight one more time this year. I really do hope so. I want to fight as many times as possible.

“You have to ask my manager on that one,” said Vergil when asked what’s the hold-up. “I don’t want to say it is. It could be, but I don’t know what they’re thinking,” said Ortiz about whether his high KO ratio is scaring away potential opponents.

“There would be a lot of factors that are coming into play, but I don’t know. If he says it, then it’s probably true,” Ortiz Jr said about Oscar De La Hoya working on a date for him.

“He’s a fighter. I don’t think of him,” said Ortiz when asked about his opinion of Jaron ‘Boots’ Ennis. “If he fights, he fights. It’s whatever. I’ve seen some of his fights, yeah. What do I say? He’s a good fighter.

“What I think don’t matter to anyone. ‘Oh, he’s a hater. He’s scared of him.’ I really don’t care what people say.

“It’s possible,” said Ortiz about whether he could get a fight against Errol Spence Jr or Terence Crawford if their fight fails to happen. “I haven’t checked the rankings in a while. I’m probably still #1 in a couple of them, so it’s very possible.

“It’s a really close fight [Spence vs. Crawford]. Let me say this first. I think they both can win the fight. I lean more towards Crawford if we’re going based on their last fights.

“I’m going with Crawford. I feel he has the slight edge right now. But like I said, I think they both have what it takes to beat one another. I really can’t pick a winner. That’s the beauty of boxing. You never know what’s going to happen.

“They’re going to approach it like it’s the biggest fight of their life, because honestly, it probably is. So they’re going to take it very seriously.

“When they go in, I imagine they’re going to feel each other out like fights usually go, and then it’ll pick up. It’ll pick up really fast. I think it’ll pick up in the third round,” said Ortiz about the Spence vs. Crawford fight.

“They’re two exciting fighters, or it could be the exact opposite. That’s what boxing is all about. We really don’t know. I’m really bad with predictions.

“I feel like that might be a bad thing to do,” said Ortiz about Spence jumping on Crawford right away. “He might run into a setup or something. That’s what Crawford is good at.

“I hope three at the minimum. If I don’t again this year, then that’s only one fight this year,” said Ortiz about wanting to fight three times this year. “That sucks. That really does suck. I want to fight as much as I can. At the minimum, three or four,” said Ortiz. 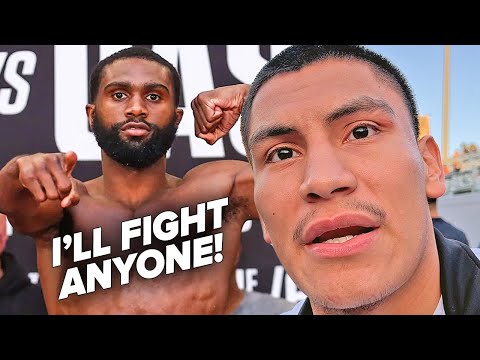