Deontay Wilder Not Sure What Robert Helenius Will Bring By Robert Segal: Deontay Wilder isn’t sure what to expect from his old sparring partner Robert Helenius on October 15th in their 12-round headliner fight on FOX Sports PPV at the Barclays Center in Brooklyn, New York.

As Helenius (31-3, 20 KOs) points out, he didn’t show his real self when he was working as a sparring partner for former WBC heavyweight champion Wilder (42-2-1, 41 KOs) because he was always emulating someone to help him prepare for fights.

Wilder believes he saw roughly half of Helenius during their sparring sessions because he thinks that he reverted to his true fighting style when things weren’t working for him.

What Wilder isn’t sure about is how the fight with Helenius will go down if he chooses to come storming out the gates, as we saw in his two fights with Adam Kownacki.

“I agree with Robert. He was emulating another character and trying to get me right in the same sense that you sometimes switch to what you know when things aren’t going right,” said Deontay Wilder to Fighthype, reacting to being told that his opponent Robert Helenius saying that he didn’t show his full arsenal when he worked as a sparring partner for him.

“He doesn’t have to remind me of emulating, and that’s not the real him. I know he’s coming with the heat. I don’t need to know that, Robert. I’m not taking you lightly, brother.

“He’s an honest guy, and he works hard, him and his trainer. It’s going to be a pleasure to get in the ring with him on October 15th, and we both fight our hearts out because we both put our hearts on the line.

“He’s going to get himself into a different territory with me, and it’s going to be vice versa.

“If the fight is really aggressive, then we’re going to get into territory we never faced before with each other. It makes for a great fight when it happens. He doesn’t know what I’m going to do at that time,” said Wilder 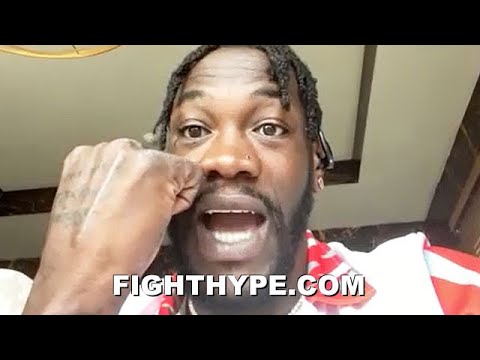