The 24-year-old Fundora is coming off a grueling war with Erickson ‘The Hammer’ Lubin from last April, and he might not be fully recovered from all the heavy shots that he ate in that fight.

Lubin dropped Fundora in the seventh round and seemingly had him close to being stopped. If not for Fundora’s punch resistance, he might have been knocked out.

Ocampo can punch, and he’s got the tools to give Fundora problems if he can withstand his power and his punch output. Fundora was a punching machine in his victories over Lubin, Sergio Garcia, Habib Ahmed, Jorge Cota, and Nathaniel Gallimore.

The only blemish on Fundora’s six-year professional resume is a questionable 10 round draw against Jamontay Clark in 2019. That was a fight that Fundora appeared to do enough to win, but the judges saw it as a draw.

It would be interesting to see Fundora and Clark fight a rematch right now. Clark was recently knocked out in two rounds by Terrell Gausha, and didn’t look like the same fighter that Fundora fought.

“I didn’t take any conclusions from it because he’s strong and a complicated opponent, but nothing that can’t be overcome. That’s the main thing that I want everyone to know,” said Carlos Ocampo to K.O. Artist Sports when asked what he saw in the eyes of Sebastian Fundora during their face-off at the weigh-in on Friday.

“Fortunately, we were able to find a tall southpaw that helped us a lot in the preparation,” said Ocampo when asked if he had a tough time finding a sparring partner that was close to the same height at the 6’6″ Fundora.

“The main benefit of going up in weight is I’m more powerful and stronger. It was a careless moment, a split second where I was distracted, and that cost me,” said Ocampo when asked what happened in his first round knockout loss to Errol Spence Jr. in 2018. “Against an opponent like Spence, you can’t take that luxury.” 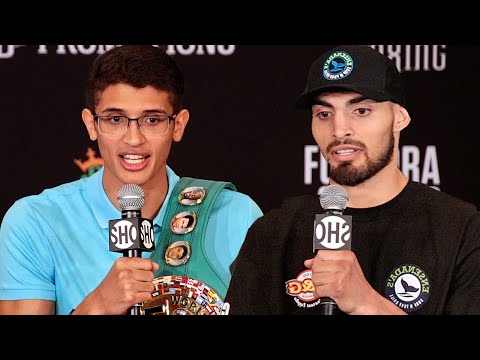