Arum says he believes Joshua and his promoter Eddie Hearn will focus on getting a couple of confidence boosters under their belt before they look to fight Fury possibly next year.

Earlier today, Fury gave Joshua an oddball deadline of today for him to agree on fighting him on November 26th or December 3rd, along with a 60-40 split and a split of 50-50 for the rematch if there were one.

Hearn had already made it crystal clear that he wanted December 17th for the Fury-Joshua fight, as well as a 60-40 split in Joshua’s favor should he beat Fury.

“I don’t think it’s going to happen because while Fury would want it to happen, I put myself in the shoes of Eddie Hearn and Joshua, and after losing to Usyk, the first thing you want to do is get him back in the ring, Joshua and get him two fights where it restores his confidence,” said Bob Arum to Boxing Social.

“If he goes back in the ring with Fury, it’s going to be a massacre. I think that is pretty fair. Joshua isn’t a champion anymore,” said Arum when asked if a 60-40 split in favor of Fury is a fair split for a Joshua fight.

“If Fury is willing to do that in a rematch, sure I’ll go along with it,” said Arum about the split being in Joshua’s favor 60-40 if he beats Fury in the first fight.

“I don’t believe Fury vs. Joshua will happen this year because everything I know about boxing from Joshua’s standpoint indicates it won’t happen.

“I talked to Usyk’s manager Egis Klimas yesterday, and he said, ‘Please don’t rush us. We’ll do the fight in the first quarter of next year with Fury against Usyk.’

“Meanwhile, Fury wants to stay busy, so if this Joshua fight doesn’t come to fruition, which I believe it won’t, then Frank & George and Queensbury and are people will find a suitable opponent for Fury to fight in the UK,” said Arum. 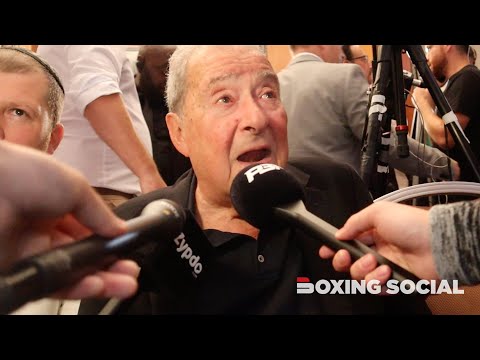