By Charles Brun: Tyson Fury dismissed Tony Bellew as little more than a “fanboy” for Anthony Joshua when told that he feels AJ deserves a 50-50 split because he’s a bigger draw than him.

Bellew made some good points on Tuesday, saying that Joshua is the bigger star, which is why WBC heavyweight champion Fury (32-0-1, 23 KOs) is choosing to try and set up a fight against him despite AJ’s back-to-back losses to Oleksandr Usyk.

With the way that Fury is pushing hard for the Joshua fight and seeming utterly desperate for this match-up, it confirms in Bellew’s mind that he’s the bigger star.

Bellew says he has the pay-per-view, which shows that Joshua is the bigger name compared to Fury, who has arguably hurt his popularity with his frequent mentioning of retirement & oddball talk of wanting to fight Thor, Francis Ngannou, Manuel Charr, and Derek Chisora.

“No, because Bellew’s a fanboy for AJ, isn’t he,” said Tyson Fury to talkSPORT when asked if he was surprised that Tony Bellew said that Anthony Joshua deserves a 50-50 split.

I have to disagree with Fury. Bellew feels that Joshua deserves better than a 60-40 split, given that he’s the more popular fighter of the two.

Moreover, Bellew thinks Joshua shouldn’t take the fight unless it’s a better deal. Fury’s assistance on November 26th or December 3rd is another reason for Joshua not to take the fight.

“Why is the best fighter in the world, which is me, calling out AJ. The reason is because the little guy, Usyk beat the bodybuilder and doesn’t want any smoke with the Gypsy King.

“Who better now than to fight AJ? I have the highest attending crowd in the UK, with 94,000 at Wembley on my own.

“Those are the dates [November 26th and December 3rd], and if they’re no good, then he doesn’t want this fight,” said Fury about Joshua. “I prefer November 26th.

“Anything can happen when you have two giant heavyweights in the ring,” said Fury when asked for a prediction on his fight with Joshua.

“I’ve always said what happens when I fight Joshua. He gets cleaned out within six or seven rounds if he lasts that long.

“He was a bit better, but he needed to do that time five of what he did,” said Fury bout Joshua’s performance in his rematch with Usyk. 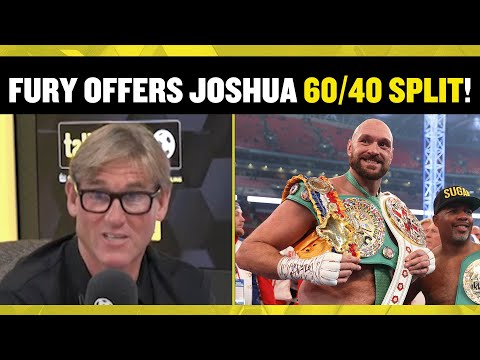