By Jack Tiernan: Conor Benn will ultimately make the decision whether to have his B-sample tested by VADA after his A-sample came up positive for the banned substance clomifene, which wiped out his scheduled fight against Chris Eubank Jr for this Saturday.

According to Dan Rafael, it’s very, very rare that the B-sample comes up with different results than the A-sample. If Benn chooses to have his B-sample tested, it’s up to him and his management to decide whether they want to release the test results to the public.

If they choose not to, then the public will never know what the results are. In other words, if Benn’s B-sample is dirty, he doesn’t have to inform the public, and they’ll be none the wiser.

“If this fight wasn’t canceled because of that story, it probably would have gone forward,” said Dan Rafael to Boxing Social about the Chris Eubank Jr vs. Conor Benn fight.

“My reporting tells me that the test that Conor Benn failed, or the sample anyway, was a urine sample,  it was provided to VADA on September 1st. That’s over a month ago.

“It does take time for testing and to return the results. So if he gave the urine sample on September 1, my sources tell me that sample was returned. In other words, they knew the results came to light on September 23rd. That’s over two weeks. That was more than two weeks ago.

“The A & the B sample. If I come to you and I say, ‘We’re going to do a drug test,’ and you pee for me.’ Half of that sample is going to go in one vial and get wrapped up properly, and the other half is going to go into the other vial. That’s going to be the B-sample.

“The B-sample is there in the event that something happens to the A-sample or if there’s a positive test. It’s the control for what happens with the A-sample.

“So if we crack your A-sample as we go through the drug testing process and there’s a problem with it. It comes back positive for whatever substance. Now that’s a problem. You now have the option with the way that VADA’s rules read.

“You test that sample, and if it comes back the same as the A-sample. Obviously, you’re guilty. If it comes back different, then that’s a different story. I’ll say this. I’ve written hundreds of drug-testing stories in my time.

“I’m telling you that you don’t have B-samples that come back different from A-samples. You have a better chance of being hit by lightning and winning the lottery on the same day as the A and the B-sample coming back differently.

“I would be willing to wager anything in this world that Conor Benn’s B-sample, should he choose to have it tested, will come back exactly the same as the A-sample.

“It’s really like a hedge. It’s for the athletes’ benefit for the B-sample s that there’s no funny business. That way, if the A-sample comes up positive, you have something that was taken at the same time that you can look to to make sure there’s no issue.

“Why would you spend tens of thousands of dollars per boxer to have a full panel of drug testing done under VADA’s program if you’re not going to recognize the results?

“Nobody forced him to sign up for VADA. They were going to be tested by UKAD anyway. I wish I had an answer to that. That’s a crazy thing to do.

“That takes a lot of gumption on behalf of the athlete if they’re cheating to sign up for a program that they know is going to test them. I can’t answer that. It does make no sense.

“If you’re spending all that money, the idea is to make sure it’s a clean fight. So why then, if you test positive, everybody just wants to say, ‘Just forget it. Let them fight anyway.’

“Just don’t bother signing up for VADA, and the fight probably would have taken place. That’s going to be up to Conor Benn. He’s the one that can decide if he wants that B-sample tested, then they’ll test the B-sample.

“Whether we’ll know the result of that or not publicly, that’s not for sure. That would be up to him or his team to put out. It would have to be a situation like what happened with the positive test in the first place. There would be a leak to a media outlet, and we’d know based on that.

“He’s [Conor Benn] not under any particular onus to put it out to the public. Absolutely, and I’ve thought that not just for this particular but in general,” said Rafael when asked if the British Boxing Board of Control should recognize VADA.

“Why would you not recognize a world-renowned testing agency? The VADA people do an outstanding job. I’ve been covering them for many years. Margaret Goodman, the president of VADA, has been one of the great champions of clean sports there is on this planet.

“Her organization has done a great job in boxing. They’re the ones that seem to catch people on a regular basis. The one thing that is negative to VADA is not that they’re testing is bad. They’re not a adjudication. In other words, their organization can’t suspend a fighter, can’t cancel a fight, can’t make a recommendation.

“They’re strictly to test a fighter and provide the results. What’s adjudicated from that is left up to the local commissions, governing bodies and etc. They provide the service of doing the quality testing for any number of substances.

“If you sign up for a VADA program, they’re not all created equal. You can get a certain one because it costs money. It’s like you go to a restaurant. You can either buy the six-dollar meal, the ten-dollar meal or the 30-dollar meal, or the 40-dollar meal.

“The higher the price, the more stuff they’re going to test for. But the point is VADA will test, and they can’t dole out any kind of punishment. So that’s the thing, but I do believe that not just the British Board but all local commissions should accept VADA 100%.

“In the state of Nevada where Las Vegas is where many of the biggest fights in the world take place when the Nevada Commission activates what they call enhanced testing, which means they want a little bit more.

“Maybe it’s a much bigger fight, or maybe one of the athletes has a background with a failed test, or there’s a reason to have better testing admittingly than they can do.

“They actually work with VADA, and VADA conducts their enhanced testing. Then they report those results to the Nevada Commission. So they accept it. They’re one of the great Commissions in boxing in the whole world.

“I can’t understand why in the UK, where there’s a great boxing tradition, a lot of great fighters and big events why they also wouldn’t accept that too. UKAD, in my mind, has shown itself to have some issues.

“Look at the situation with Tyson Fury many years ago before he beats Wladimir Klitschko for the heavyweight championship. He had a positive test that UKAD covered up that had taken place in the fight before that. It didn’t come to light until after the Klitschko fight.

“That was ridiculous. I don’t understand. Let’s just be transparent. If you fail a test and you go through the process. Obviously, as I mentioned earlier, not every positive test is created equal.

“You should accept those results and do the proper screening and make sure all is legit and accept those results. The technicalities that they were trying to get in place to allow this fight between Conor Benn and Chris Eubank Jr to go forward because the test was a VADA test and not a UKAD test is one of the most ridiculous things I’ve ever heard,” said Rafael. 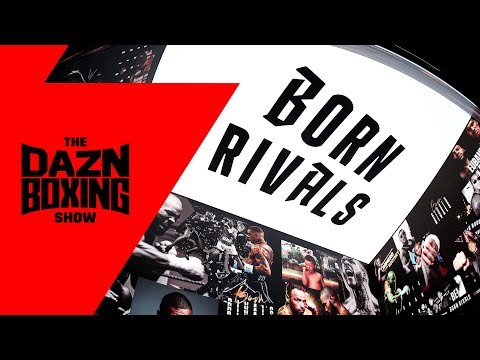