I was ranked fourth in Britain over 10,000m in 1988 behind Liz McColgan, my twin sister Angela (Tooby) and Jill Hunter. On paper, I wasn’t going to the Seoul Olympics so Harry Wilson, who was coaching us, said: “Well, there’s only one way to go, and that’s upwards.”

I knew that I potentially could run a reasonably good marathon and Harry set my programme of racing really specifically for the marathon but also not to lose any speed.

I was training fast miles on a long distance. If you think about it, if I was a reasonably good 10,000m runner and potentially not a bad marathon runner, then at the pace that I was going at, the distance I was going to run best at was the half-marathon.

Harry wasn’t a great believer in doing high mileage and I never exceeded 80 miles [in a week]. The time I did 80, I had shin splints, so I wasn’t really an athlete who could cope with too many miles. Those I ran were quite qualitative.

That, coupled with the regular interval sessions that I was doing with the rest of the squad, meant I still did the same reps as Angela, who was training for the 10,000m and that’s probably where I built up my endurance more.

The two of us had quite a good relationship in terms of training. When we were both running the same distances, I never expected to be in front of her, which maybe was not such a good thing. Even in training, I always expected to be slightly behind her. I never had that extra drive to try and beat her because I always felt that I couldn’t.

Moving up to the marathon probably gave me a little bit more confidence in myself, because I wasn’t competing against her and this was something I could do that she probably wasn’t quite as good at.

But we were ideal training partners really. The difference between us was marginal. I didn’t particularly enjoy the 10,000m. Had the 5000m been a championship event then, I think both of us would have stuck to it and wouldn’t have stepped up from the 3000m to 10,000m.

The organisers gave me accommodation the night before the Great North Run but the previous night we’d driven up from Herefordshire and camped near to Hadrian’s Wall. My dad was so cold, he ended up sleeping in the car, so the preparation wasn’t the best. I probably didn’t have enough sleep. I hardly slept at all that night.

But, in a way, it just goes to show that I was probably quite relaxed about it. Going into the race, there was no pressure on me because my fastest time was in Reading the previous year where I ran 72-something, which was still quite reasonable in those days.

But to shave two-and-a bit-minutes off (with 69:56) is quite a lot. I knew I could potentially run around 70 minutes because the Reading course is probably harder than the Great North and I was in better shape by the time I went to the Great North.

I don’t think I put a lot of expectation on myself. It was a benchmark towards the marathon. I can remember lining up and there was Veronique Marot who I was expecting to finish in front of me. I probably overtook her inside the first three miles and never saw her again which, at that time, was the only indicator that I actually was running quite well.

The funny thing was that when we got to about three or four miles in, I realised there was a guy there who was part of my training squad. I ran with him for probably two-thirds of the way which was actually quite a help to me but I had absolutely no idea what time I was running, what pace I was on or where I was in the field. That’s the difference from today. In those days, the women just didn’t know. 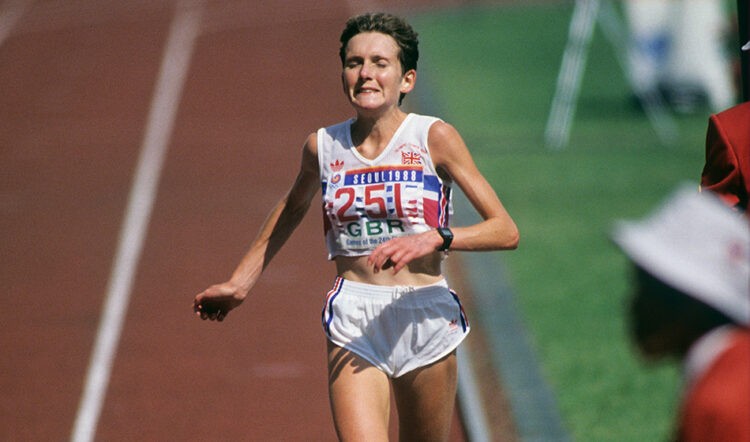 It wasn’t the first time I’d run against Grete Waitz, because we’d run quite a lot on the roads over in Scandinavia and in cross-country. I wasn’t in awe of her but I thought she was a tremendous athlete. I never believed I would ever be in contention with her. So to finish second to her was unbelievable and a surprise.

Afterwards, all these people wanted to interview me. It was all mind-boggling, that I’d run under 70 minutes, and I’d broken the British record. There was absolutely no way during any part of that race that I knew that I was anywhere near the British record. It wouldn’t have even entered my head to know what the British record was. I was that casual about it.

I never set myself the goal of getting the Olympic medal after that in Seoul because that was just unobtainable. For me, it was only really my third-ever marathon. And I didn’t feel as if I was an experienced marathoner.

But I went out there wanting to be the first British finisher. We had two laps of the track once we got into the stadium at the finish and I think Angie Hulley overtook me on the first one. So I’d already run nearly 26 miles and that was that bit of glory lost. I found that quite difficult.

What I did now gets swallowed up by Jake’s achievements. I’m not sure my kids really realise I’d had a British record at one time and also Jake’s now the athlete in the house. My achievements are slightly irrelevant, and I’m not bothered about that at all.