As far as Pitbull Cruz (24-2-1, 17 KOs) is concerned, he’s done enough to earn a rematch with WBA ‘regular’ lightweight champion Tank Davis after losing a questionable 12 round unanimous decision against him last December.

Cruz, 24, has won his last two fights since that loss, and he feels that he’s done enough to get the rematch with Tank now.

Moreover, Pitbull Cruz notes that the fans are the ones that are demanding the rematch, as they were screaming for Tank to fight him again immediately after his win over Ramirez (27-3-3, 12 KOs) last Sunday night at the Crypto Arena in Los Angeles.

Tank was in the audience, and the fans let him know that they wanted to see the rematch with Cruz next.  It appears that Tank will be fighting Ryan Garcia in December if they can get the fight negotiated.

Last Sunday, Tank suggested that Pitbull Cruz fight Rolando ‘Rolly’ Romero next, which sounds like a good idea, but it’s doubtful it will happen.

Rolly doesn’t appear to be interested in fighting Cruz, as he feels that he should be given the rematch with Tank based on his popularity.

If Rolly did take the fight with Pitbull Cruz, it would be a massive won, and the winner would be in the pole position to battle Tank in a rematch after he takes care of Ryan Garcia in December.

Other options for Pitbull Cruz:

“We didn’t expect the fight to end so fast. All the hard work in camp showed in the fight,” said Isaac ‘Pitbull’ Cruz to Little Giant Boxing, reflecting on his victory over Eduardo Ramirez.

“I’ve said once, and I’ll say it again, I like to do my talking inside the ring, not outside of it. I expected Eduardo to run around the ring, but I never expected him to be scared and cautious.

“Fans are the best judges as far as knowing who wins the fights. Huge! One of the most interesting fights in my career,” said Pitbull Cruz when asked how big is the rematch with Tank Davis.

“Rest and enjoy my family before December and then decide what’s next,” Cruz said when asked who’s next for him. “I would love to be here [in Los Angeles at the Crypto Arena] another 2-3 times to show love to all the fans here and around the world.

“Well, if it happens, cool. If it doesn’t, cool,” said Pitbull Cruz about a fight between Tank Davis and Ryan Garcia in December. “Now it’s between the two teams to see if they can make it happen.

“My prediction is that it’s a 50-50 fight, a great fight,” said Cruz about the September 17th trilogy match between Canelo Alvarez and Gennadiy Golovkin. “It’s a fight that’s going to go down in history.

“It’s personal like Canelo said. It’s a 50-50 fight because they say GGG is old, but just because he’s old doesn’t mean he’s not going to give Canelo a fight. Just because Canelo lost doesn’t mean it’s a lost cause. Canelo is going to come with so much motivation.

“Hopefully, he can get back up from that tough loss,” said Pitbull Cruz about Jose ‘El Rayo’ Valenzuela, who lost to Edwin De Los Santos lat Sunday night.

“I saw him say that I was acting as if I beat Tank Davis. That wasn’t the case. The fans expressed that to me. My only message is to recover and get back up from that tough loss.

“No words. I have no words for their love and support. I’m grateful to God and all the fans that support me. I have nothing to offer the fans except to give them the biggest fights so they can enjoy them.

“I’m going to give it my all so that you guys are happy when you see my fights,” said Cruz. 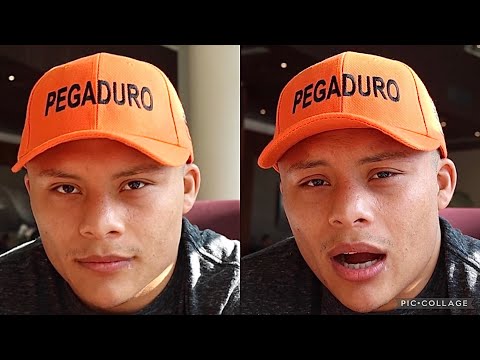