By Adam Baskin: Chris Van Heerden wonders whether Conor Benn was dirty when he fought him last April and took him out with one punch in the second round in Manchester, England.

Benn (21-0, 14 KOs) was popped on a VADA-conducted test, coming up positive for the banned substance clomifene, three days ahead of his DAZN pay-per-view fight against Chris Eubank Jr on Saturday night at the O2 Arena in London.

Thus far, Benn hasn’t been suspended or surprisingly charged with a violation. The Commission for the fight uses UKAD, which Benn tested negative for their tests.

Interestingly, Benn’s positive test for clomifene with VADA might not be enough for the fight to be canceled because the Commission uses UKAD as their testing agency.

“I can understand Conor’s frustration. ‘This fight should go on,’ because he’s the one that’s cheating, so he’s the one with all the confidence in the world,” said Chris Van Heerden to Fight Hub TV.

“I’ve been hit by Spence a lot, and I’ve been hit by Ennis to know that when Ennis hit me, he didn’t drop me, but when he hit me, ‘Oh boy.’ Ennis’ power is even more than Spence’s power.

“When Ennis hit me, I got a little scared in the sense, ‘Oh damn, this is different power.’

In round one, I wanted to catch the rhythm,” said Van Heerden about his fight with Conor Benn last April. “If you listen to the commentary, they gave me a good round one. Even one of the judges gave me round one.

“I didn’t get caught in round one to go, ‘Oh wow.’ The one punch that caught me in round two, I buzzed, I was out of it,” said Van Heerden about being hurt by Benn. “So there wasn’t time for me to absorb his power and go, ‘Okay, the boys got power.’

“The way he touched me on the chin, I was buzzing. It was weird because I’ve been hit by heavy hitters, and I’m known for being a tough kid. In the fight just before me, he knocked out Chris Algieri in a bad fashion, like in a bad way.

“Now I go back to Chris Algieri. Was he using anything when he fought Algieri because Pacquiao fought Algieri, but he didn’t destroy him in that fashion? Then comes Conor and destroys Algieri with one ugly punch and puts me down with one punch.

“We’re fighters, and I’m not a sore loser, but I can’t help to have a question. Yes, especially in the fashion he did it,” said Van Heerden when told that prior Benn opponents might suspect that he might have been on something when they fought him.

“I was so confident of beating Conor Benn, especially after round one because I tagged him easily. Keep in mind I’d been inactive for two years, then get in there and start tagging Conor Benn in round one.

“Then one punch took me out. That’s boxing. I still have so much fight in me. I spar with some undefeated guys in California, and I still have it.

“Then they’re going to find another way to cheat the system,” said Van Heerden when asked what if the Eubank Jr vs. Benn fight takes place in another country. “It doesn’t set a good example. 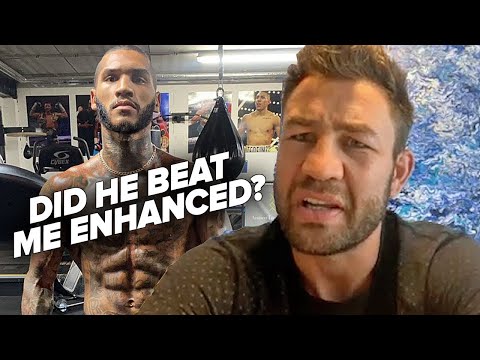