In one of the most eventful men’s races in the history of the New York City Marathon, Evans Chebet took victory in 2:08:41 after a brave do-or-die effort from Daniel Do Nascimento that ended with him collapsing roadside less than six miles from the finish.

After scorching through the undulating first 5km in 14:31 (which included the second downhill mile in 4:20), 10km in 28:42 and halfway in 61:22, Do Nascimento built a two-minute lead over Chebet and the chasing pack.

But in a dramatic few minutes from 18 until just after 20 miles the Brazilian stopped for an 18-second toilet break, then stopped again briefly to walk before finally grinding to a standstill and dropping to the floor where he glanced up despondently as Chebet mercilessly moved past and into the lead.

The confused driver of the lead vehicle did not know whether to hover next to Do Nascimento or keep moving and in the melee almost swerved into Chebet as he raced through between the car and Do Nascimento.

Keeping his cool and with his legs still feeling okay after a more sensible first half of 63:36, the Kenyan pressed on to finish ahead of Shura Kitata of Ethiopia, who clocked 2:08:54 in second as Abdi Nageeye of Netherlands was third in 2:10:31.

Daniel Do Nascimento through 25km in 1:13:29 and still has a sizeable lead of over two minutes 🇧🇷

Geoffrey Mutai’s 2011 course record of 2:05:06 survives another year although Chebet became the first man since Mutai (nine years ago) to win the New York City and Boston marathons in the same year.

It also means a Kenyan has won all six of the World Marathon Majors men’s races this year.

US hope Galen Rupp looked good early in the race and at one point took up the challenge of chasing down Do Nascimento, but he began to struggle and dropped out at 30km. This left Scott Fauble as the leading American in ninth place in 2:13:35.

The excitement of the race was further validation of New York Road Runners’ policy of not having pacemakers. They prefer to let the athletes battle it out ‘championship style’ and the women’s race also benefited from this as marathon debutante Sharon Lokedi emerged a surprise winner ahead of Lonah Salpeter.

With temperatures of 21C and rising during the race, course records were unlikely and after passing halfway in 72:17 Lokedi stretched away in the final mile to win in 2:23:23.

Only seven seconds behind, Salpeter ran 2:23:30 which meant Lokedi could not relax and begin to celebrate until the final 50 metres or so in Central Park.

Aged 28, Lokedi was born in Kenya but won an NCAA 10,000m title while studying at the University of Kansas. However she wasn’t billed as one of the main contenders before Sunday’s race as her 2022 form saw her finish fourth in the NYC Half in March in 68:14 followed by fourth place in the Great Manchester Run 10km in May. Coached by Stephen Haas and sponsored by Under Armour, though, she beat a top-class field. 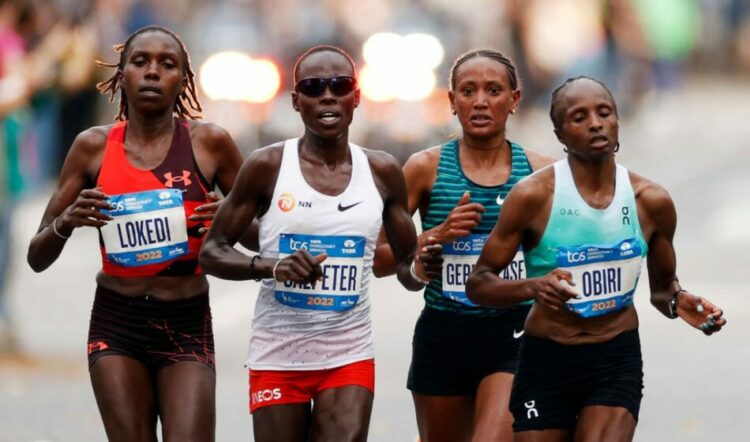 Gotytom Gebreslase, the world champion from Eugene in July, was third in 2:23:39 with Edna Kiplagat, now aged 43, fourth in 2:24:13, Viola Cheptoo 2:25:34 and Hellen Obiri, the former world champion on the track and cross country, struggling on her debut marathon to run 2:25:49 in sixth.

The wheelchair racers thrived in the conditions with Marcel Hug clocking 85:26 to break Kurt Fearnley’s course record as he registered his fifth win in New York.

Daniel Romanchuk was runner-up in 87:28 with Jetze Plat third. 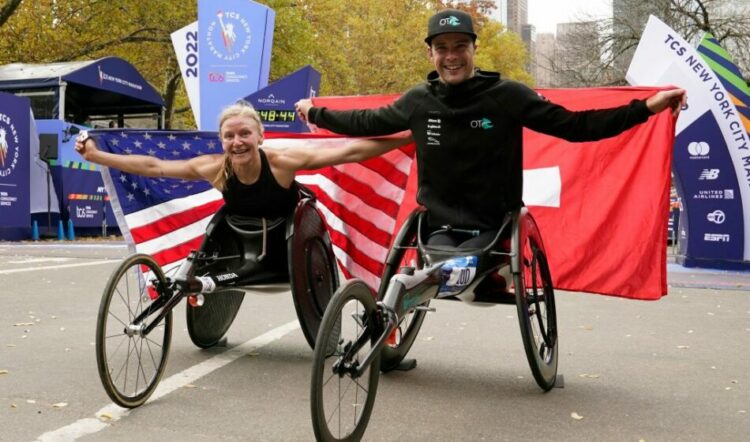 Susannah Scaroni also set a course record in the women’s race with 1:42:43 to break Tatyana McFadden’s mark as Manuela Schar was runner-up in 1:45:11 and Madison de Rozario third.