The 30,000 crowd came to the Alexander Stadium to watch Keely Hodgkinson win 800m gold but the biggest smile of the night came courtesy of a humble 400m hurdler from Guernsey.

Kyron McMaster of the British Virgin Islands successfully defended his title in 48.93 as Jaheel Hyde of Jamaica was second in 49.78. But the story of the race was Alastair Chalmers with an inspired late surge from lane two to take bronze in 49.97.

Such was his delight, he carried on running through the line seemingly shell-shocked by his own performance and he ran right into the arms of friends and family on the first bend.

It was the first ever track and field medal for Guernsey in the Commonwealth Games as he beat the achievements of Guernsey greats of the past such as decathlete Dale Garland, endurance runner Lee Merrien and race walker Len Duquemin. “I’m so happy to have made history,” he said.

Amazingly, the 22-year-old had Covid just last week too after reaching the semi-finals at the World Championships in Eugene.

McMaster was fourth in the Olympic final last year and said: “In my career I want to progress, but this year there have been a lot of struggles and a lot of injuries, so I’m very grateful that I came out here injury free.

“I’ve been battling injury since May. I strained one hamstring then recovered and then strained the other hamstring, so it’s been an uphill battle for me, but that is the game.”

As for Chalmers, he said: “It’s a dream come true, I come from such a small island. This is what the Commonwealth Games is about, giving these small islands and athletes an opportunity to come out on the big stage and see what they can do.

“I usually compete for Great Britain but to represent Guernsey – where I’m from, who I am – it’s just an extra special part. It’s the biggest thing of my career so far.”

He added: “Hopefully I can inspire a lot of younger athletes to come and make their dreams come through. Because a couple of years ago I was just a kid from Guernsey running round a track and now I’m here in front of 30,000 people living it. It’s amazing.” 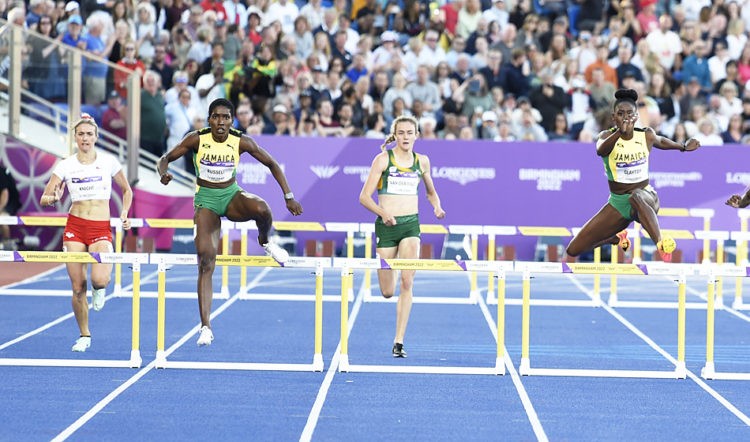 Janieve Russell successfully defended her women’s 400m hurdles title and she narrowly missed out on leading Jamaica to a clean sweep of the medals.

Team-mate Rushell Clayton led into the home straight with Russell poised close behind and fellow Jamaican Shiann Salmon also in a medal position.

But Zeney van der Walt of South Africa finished like a train as she moved from sixth with 100m to go to nab a bronze medal as she passed the dying Clayton in the closing metres.