Atlas was wowed by Crawford’s performance against Yuriorkis Gamboa in 2014. In that fight, Crawford was getting his backside handed to him by the Cuban great, who was at the backend of his prime at the time.

Atlas notes that Crawford was staggered by Gamboa at one point in the fight, but he had the wits to back off and switch stances. The way that Crawford recovered while badly hurt impressed Atlas enough to feel his instincts are what separates him from Spence.

If Spence hurts Crawford, it might be a little more difficult for the Nebraska native to recover from that because he hits a lot harder than Gamboa, who was fighting out of his natural weight class of featherweight at the time he battled Terence at lightweight.

“Contracts don’t fight. People fight, and until it’s signed on the dotted line, it’s not a fight yet,” said Teddy Atlas on The Fight, talking about the Errol Spence Jr vs. Terence Crawford clash.

“You got Spence, who is the horse. He’s the naturally bigger welterweight. Crawford has moved up in three different weight classes and won titles. It’s amazing. He’s got the skeleton to do that. Not everyone did it. Pacquiao did it. It’s unusual. He did it.

“He’s special; they’re both special. Spence is strong and a good body puncher. He can pressure but also box. Don’t miss that boat. Don’t miss that on him. That’s how he beat Mikey Garcia so easily.

“He used his jab; he can box. He was an Olympian, and he’s technically solid. He can box, he can counter, he can do that. Yeah, he’s aggressive for the most part, but he can also box. He’s got skills, and he’s got technique.

“Again, determined, tough, physical. He tries to impose his physicality on you. He puts water in the basement, goes to the body, and goes up and down. He’s terrific. He knows how to put them together.

“Crawford real technically solid. He doesn’t keep his hands up as good as Spence. He gets a little looser, but he gets them up when they have to be up. Maybe you can time him sometimes when he’s stepping back.

“You got to be willing to take the chance to do that, and you’ve got to be on time. I think, not the naturally bigger guy, but he’s carrying his power. Crawford, he can do everything.

“He can go get you. He likes to control range with the jab, and he can counter with the best of them. When he has to get in the kitchen with the heat, he can get in your kitchen.

“He’s a cerebral guy too. All the top guys are. He’s got all the abilities and the technique. Here’s where he differs. He may be the greatest switch-hitter since Mickey Mantle. That is Crawford.

“I don’t think I’ve ever seen a better switch-hitter. He can go lefty or righty and not miss a beat. Andre Ward was a great switch-hitter too. Crawford is unbelievable in that area. So he’s got those options.

“I was showing when he got tested on his way up by Gamboa. A former world champion and a little past it by that point. He was a Cuban fighter who came from the great Olympic teams. He won a gold medal and had great hand speed and great power.

“He was a featherweight and had moved up to fight Crawford. It was Crawford’s first real test, and he hurt Crawford. Crawford was winning, but he hurt him.

“In the late part of the fight, he hurt him. I watched it, and I saw something, and when I was getting ready for the show. I’m at home and breaking it down. I said, ‘I got to look at this again.’

“It was no accident. He kept his wits about him and instinctively switched out of southpaw orthodox for two reasons. One, he wouldn’t be as vulnerable to the right hand, and two, he would have to counter his left hook where Gamboa was looking for right hands now. He knew it.

“He might get a little right hand happy and a little fat with his right hand, a little loose with it, a little greedy if you will, and reach in and get reckless with it.

“When I broke it down with Crawford, he said, ‘This is the first time I ever saw it.’ That’s instincts; that’s special. That is not taught. That’s special.

“Not everyone gets that. That’s what separates this man, and that’s why I would have to pick him in that fight, as much as I love both. I love Spence. That’s the edge; that’s the difference. It’ll be a hell of a fight, and I hope it’s made.

“Supposedly, they agreed to some major terms, but it’s not done yet. I think it will be done. Hopefully, not in three years, like some of these fights that got done five years too late.

“You had that match-up in the 80s. First of all, you had network TV where everyone could see it for free, basically for the most part. Some of them went to closed circuit.

“They tested that great talent with each other with the best. I hope we get this one. It reminds me of the anticipation for the Hearns-Leonard first fight way back in the 80s,” said Atlas. 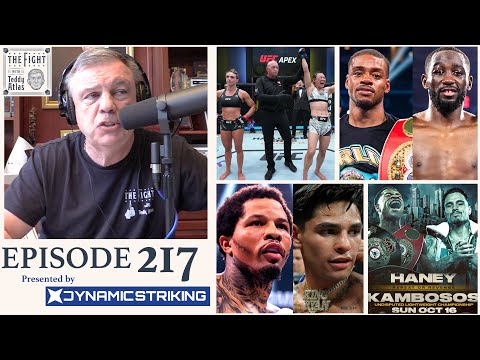