By Robert Segal: Robert Helenius says he likes being the underdog against former WBC heavyweight champion Deontay Wilder for their fight on October 15th on FOX Sports pay-per-view at the Barclays Center in Brooklyn, New York.

Helenius (31-3, 20 KOs) comes into the fight with a three-fight winning streak in a position to send Wilder into retirement should he win. Wilder has lost his last two fights by knockout to Tyson Fury, and he’s in a position of weakness.

Picking the heavy-handed Helenius is a big risk for Wilder because he’s facing a guy with more power than Fury, and there’s a blueprint for how to beat him. All Helenius has to do is follow Fury’s blueprint, and he could knock out Wilder on October 15th.

We don’t know if Wilder’s punch resistance has been permanently impaired from his two knockout losses to Fury. If so, Helenius could capitalize on that.

“It’s difficult to say because we have bigger gloves on and headgear on. It’s very fast,” said Robert Helenius during today’s virtual press conference when asked how Deontay Wilder’s power was during their sparring sessions compared to other fighters he’s fought.

“Some people punch really hard with power and force, and I think he’s more of a fast power guy. Explosiveness, I think, is the best thing about him.

“I would hope so,” said Helenius when asked if he thinks his experience will help him against Deontay. “I had 250 fights amateur. So I have a lot of experience behind me, but, of course, everything I’ve ever done in my boxing career has led me here.

“I just have to show my best boxing in this fight, and it will be mine. I think I have a really good boxing eye, a good reaction time, and good counterpunching, and a little bit of aggressivity as well.

“I like being the underdog. It kind of wakes me up in a better way. I need to concentrate better and do better for myself. Well, of course. If I didn’t feel any pressure, it wouldn’t be a really important fight for me.

“My plan is not to get knocked down. It’s a hard question to answer. I have no clue,” said Helenius when asked if he thinks he can take a hard punch from Deontay and get back up the way Tyson Fury did on four occasions,” said Helenius. 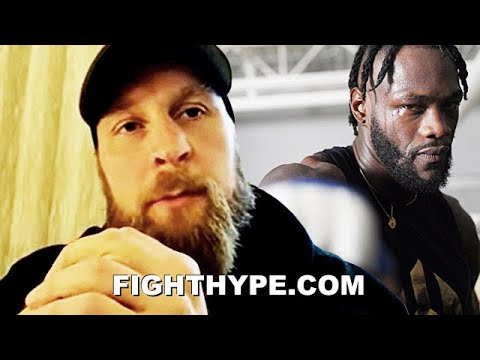