By Adam Baskin: Regis Prograis says Terence Crawford will be reaching too far if he moves up to 154 to challenge undisputed champion Jermell Charlo for his four belts.

Crawford hasn’t really been tested at 147 by any of the elite in the division as of yet, so it would be asking a lot for him to move up to 154 to take on the best fighter in the division in Jermell.

If Crawford loses to IBF, WBA & WBO welterweight champion Errol Spence when or if that fight happens, then it would be academic that he can’t mess with Jermell Charlo.

Crawford has decided that he wants to move up to 154 after he faces Spence, and that move makes sense. If the 35-year-old Crawford stays at 147, he will have to fight Jaron ‘Boots’ Ennis, and that guy is all wrong for him.

Crawford is no spring chicken, and the last thing he needs is to mix it up with the younger, stronger, and bigger Boots Ennis.

When Crawford does move up to 154, he may need to wait a year or two before he gets a shot at Jermell Charlo because there’s a long queue of contenders waiting for their title shot against him.

As such, we could be looking at Crawford getting a title shot by the time he hits 37, and that’s pretty old to be fighting for a world title in the 154-lb division.

“I really, really don’t,” said Regis Prograis to Fighthype when asked who wins between Errol Spence Jr and Terence Crawford. “At first, I was all Errol. I fought Errol in the amateurs and stuff like that. So for me, it was all Errol.

“I know he’s strong, he’s the bigger man, but Crawford has been destroying people. Crawford fought Shawn Porter, and he fought Kell Brook. He knocked both of them out.

“Shawn Porter gave Errol a hard fight. I really don’t know, bro. Alright, if I had to lean one way a little bit. If you put a shotgun to my chest, I’d probably say Errol because he’s the natural 147-pounder. That’s it. I still can’t even pick.

“I think he can go up to 154, but I don’t think he can beat Jermell,” said Prograis about Crawford. “Crawford gets hit too, and I don’t see him taking those punches. Jermell hits hard.

“But to mess with Jermell, I don’t think he can mess with Jermell at this moment. Jermell is one of the few people right now in boxing that we can say, ‘He’s the best in the division.’ Like literally.

“He has all the belts. Jermell is the best. He really should get more credit because right now, you can’t even say that about Errol. Errol is Errol and Crawford. At 135, Devin is truly the man, but it’s still conversations.

“People say, ‘You got Gervonta and Devin, and then you’ve got Shakur.’ But Devin truly has all the belts, so he should be the #1 guy. Still, people say other stuff. 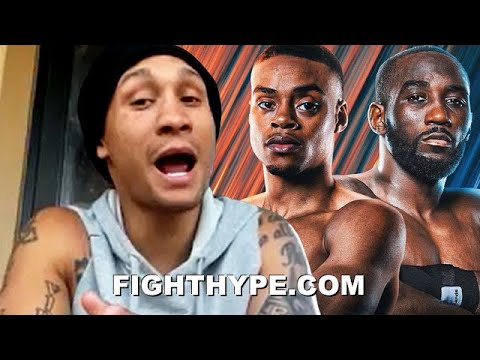