Former AW writer – and GB international miler – Paul Larkins enjoyed an adventure in the Cypriot hills, even picking up a medal for his troubles

Inspired by AW’s very own Paul Freary no less, I had no hesitation in taking the lead in Cyprus’ newest trail race, the Kato Pyrgos Trail Run which took place in early October.

As we all know Paul, an athlete of let’s say mature years, won the Andalucía Marathon in Spain, so what was I worried about I said to myself. If he can do it, I can too; after all, technically I was quicker than him (3:35.94 for 1500m in 1987), although I guess the year of that performance also confirms one other thing: I’m also much older than he is so really, I should know better.

I’d hit the front in the first-ever running of this 15km mountain run, confident I could stretch that lead over the next few kilometres, but instantly regretted that move. Thanks, Paul. His race was downhill. This one is up (or at least, half of it is) and it was getting steeper! I’ll look to someone else for inspiration next time.

Seriously though, this is a great race to add to your calendar. It’s set in a sleepy seaside village of Kato Pyrgos, far from any tourist traps yet offers this event, perfect empty sandy beaches, and amazing weather in the mid 20s. It’s spot on for anyone preparing for an autumn marathon, especially the 30km longer race which forms part of the programme. That’s because for a trail race, the going is good. Yes, it’s tough for that opening 8km or so but at the same time it’s very runnable.

After a quick opening couple of kilometres from the village square, you hit the pristine forest paths and start to climb the switch back paths heading to the high point of 444m. It is steep, but such is the quality of the paths you can quickly find a rhythm that in my case results in me passing plenty in the field – all of them in fact! Think the Alpine paths you see in the Tour de France, and you’ll get the picture. Put yourself in that low hill climbing gear, chop your running stride, work your arms, and concentrate on form. It’s effective and very rewarding.

Mind you, to get to that summit both the 15km and the accompanying 30km hit a 50 per cent climb at about 6km, which to put it mildly is very challenging indeed. Beforehand I googled 50 per cent to see how steep that is but could only come up with graphics that appeared to say it was a cliff. Surely not? Well, not quite, but for a track runner like me it wasn’t far short. Fortunately, the organisers are nothing but thoughtful and have laid on a rope to haul yourself up the 400 metres or so to the top path.

Admittedly, it’s a challenging five or ten minutes, but once at the top you’ll find yourself reaching not for an energy gel, but for your camera. There are no special kit requirements for this race as there are feed stations and although remote, you’re never too far from safety, but one thing you must carry is a camera. The sea sparkles in the distance and as you’re high above the tree line, the world is yours to enjoy. Like plenty of other runners in the 30km, you’ll stop and take in the panorama.

And then it’s all downhill. And fast as well. The groomed paths are steep to run up, but for all but one short descent they allow you to lean forward and really fly. There’s no braking; and you’re safe to allow gravity to take over safe in the knowledge the path is smooth and predictable. By now I’d drifted back to third, thinking I might try and surge hard in the final few kilometres although that’s quite hard to do when the whole field is flat out and enjoying the runner-friendly descent. I even started running sub-6s which for me aged almost 60 is nothing short of miraculous! It would be like the 1987 me clocking 4:10s.

I was really impressed by the organisation especially as for a first edition, the race proved amazingly popular – international in fact. First across the line was Sherpa Ngadi, a Nepalese based in Cyprus with the UN, second was Yiannis Effe, a Cypriot, while a Brit (myself!) was third. In the women’s race, it was equally international as Christina Dzigmovicova from Slovakia won from UN teammate, Norwegian Dorothea Bade, while Cypriot Persephone Nicolaidou was third. And that perfectly sums up what this country is all about and has been since the Romans. It’s a meeting point of cultures where runners from countries across the world can make new friends and new memories.

Plus, the food is good too! Beforehand, there’s a free breakfast for the runners complete with some magnificent local Cypriot food then afterwards the freebies continue, again with local specialities. But best of all, the commentator cheering in the finishers breaks into song every now and then, even serenading the odd runner here and there. When did you see Geoff Wightman last do that? 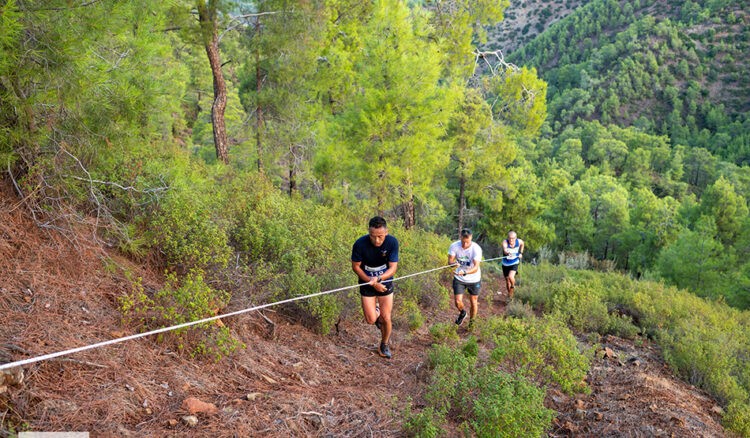 Make a date in your diary

Plenty of us have holidayed in Cyprus, but few will have explored Kato Pyrgos and the amazing hills and trails. Let’s start with the seaside community that plays host to what is a weekend of sport – it’s a tiny village, literally a one-dog town but is stunningly beautiful. Time your visit right and you’ll have miles of welcoming sandy beaches to yourself. We stayed in the Tylos Beach Hotel, which has all you need as a trail runner on holiday.

It’s close to the hills, it has that all-important beach, sea views and great local food served as and when you want it; personal service like you’ve never experienced. So, it’s no surprise it’s a popular weekend destination for runners and walkers who live in nearby Nicosia and it’s easy to see why.

It’s also popular with cyclists and kayakers – indeed, the weekend includes just that. There’s a 100km – hilly – road race for the cyclists or a more relaxed afternoon on the millpond flat sea for the kayakers. There’s also a hugely popular walking tour to enjoy, taking in the medieval churches, Alpine-like pastures and local restaurants and bars the area consists of.

So, if you’re looking for late autumn sun and warmth and a great race, then this is certainly one to think about. All the details are at run2d.com.

Top advice: make it a two-centre holiday; spend a few days in Nicosia or perhaps Paphos as we did and then drive to Kato Pyrgos for the weekend.