On a day that saw the marathon all-time ranking lists rewritten, Kelvin Kiptum ran the fastest-ever debut marathon of 2:01:53 while Amane Beriso gave the women’s world record a scare with 2:14:58.

Only Eliud Kipchoge and Kenenisa Bekele have run quicker than Kiptum as the 23-year-old scorched through the second half of the race in a scintillating 60:15 – breaking away from his rivals at 32km – to win in style.

Behind, Gabriel Geay ran a Tanzanian record of 2:03:00 with Alexander Mutiso of Kenya third in his debut marathon in 2:03:29 as Tamirat Tola, the world champion from Ethiopia, clocked a swift 2:03:40 but wound up only fourth.

Benefiting from near perfect conditions on a flat course, the top six broke 2:05 and first 12 were inside 2:07 in a race of incredible depth.

Kelvin Kiptum runs the fastest debut marathon in history to win in Valencia with 2:01:53. 😮

It’s the fourth-fastest marathon ever from the Kenyan as he is followed home by a host of super-fast times. pic.twitter.com/P5DvGIq9Vc

The women’s race was no different as Amane Beriso broke away from fellow Ethiopian Letesenbet Gidey in the closing stages to run 2:14:58 – a time that only world record-holder Brigid Kosgei (2:14:04) and Ruth Chepngetich (2:14:18) have beaten.

The much-anticipated marathon debut of Gidey saw her run the quickest marathon debut in history by a woman of 2:16:51. But the world 5000m, 10,000m and half-marathon record-holder looked disappointed to finish runner-up.

Despite winning, Beriso also looked unhappy as she told the organisers in her post-race interview that she could have broken the world record if the pacemakers had been working for her and not Gidey. 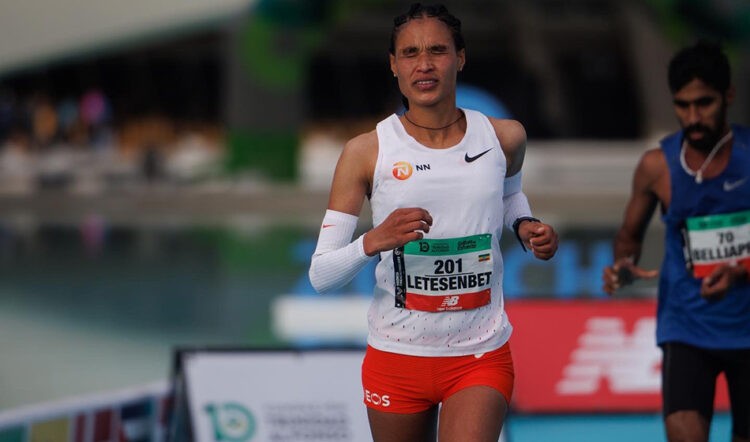 Sinead Diver, the Irish-born Australian, smashed her best of 2:24:11 to break Benita Willis’s 16-year-old national record by more than a minute with 2:21:34.

Amazingly the evergreen Diver is 45 years old too and turns 46 in February.

Natasha Cockram also enjoyed a great day as she obliterated her own Welsh record of 2:30:03 with 2:26:14. The 30-year-old missed the London Marathon in October due to a Covid-hit training build-up but her decision to tackle Valencia paid off as she jumped from No.30 to No.6 on the UK all-time rankings.

On a day packed with super-fast times, one of the host nation’s athletes, Marta Galimany, finished level with Cockram in a Spanish record of 2:26:14.