Benavidez (26-0, 23 KOs) is Canelo’s mandatory with the WBC and has been waiting for his shot at his title for ages now. Jose Sr. says he doesn’t believe Canelo, 32, will ever fight David, particularly when he says he doesn’t want to fight Mexicans.

At this point, Benavidez Sr wants Canelo to be stripped of his WBC title if he doesn’t vacate it so that his son David can capture the title. Canelo is taking what many boxing fans believe is a gimme fight against the played-out 40-year-old Gennadiy Golovkin on September 17th.

Canelo hasn’t said who he’ll fight at his rematch with Bivol, but it’s safe to say it won’t be Benavidez. His promoter Eddie Hearn seems high on matching him against Jermall Charlo, so that’s a real possibility.

“You think he cares about other fighters? He cares about himself. He cares about making money, and those are just excuses,” said Jose Benavidez Sr. to Fight Hub TV about Canelo Alvarez saying he won’t fight Mexcanfighters.

“I never in my life heard about the champion, if he wants to be like Julio Cesar Chavez. To me, Julio Cesar Chavez is the best Mexico has ever given. He will never be like him because he fought black, Puerto Ricans, Mexicans, and anybody.

“Champions right anybody, it doesn’t matter. Why don’t you come shut me up? Fight him [David Benavidez]. What it is, he’s scared of fighting David Benavidez.

“If David were so easy, he wouldn’t care if he were Mexican, but he knows David is stronger, bigger, and hungrier. I wouldn’t call him [Canelo] pound-for-pound because he lost to Bivol, but he’s a dangerous fighter.

“We’re not afraid to take challenges like that and risk our undefeated record against somebody like him. He doesn’t want to take the opportunity or the risk of losing to David Benavidez and taking all his fame. He lost to Bivol, not a problem.

“If he loses to David, Davis becomes a superstar, and he’s forgotten. That’s what I think. You’re saying he fought everybody. He’s a champion. He should fight. We’re now the interim champion for the WBC. It should be the mandatory.

“That’s why he’s making all these excuses. I’ve never heard a champion say that before. We’re here to fight anybody. Charlo, Caleb Plant, David Morrell, and Canelo. “This is what we do.

“We work hard and want to make history. In order to make history, we’ve got to beat all these guys. Other hungry fighters will come, and we’ll have to fight them too if we have those belts.

“I think he’s [Canelo] holding those belts hostage, and he does whatever he wants to do, and he doesn’t care about what people say. That’s he doesn’t get the respect he deserves.

“Every time you talk to Caleb Plant, he tries to say something. He says he’s going to come back and fight nothing but the best, but when you mentioned David Benavidez, he starts stalking s***, crazy s***.

“Even when he was with Mike Tyson, he said, ‘Name the guy, the Mexican Monster,’ he didn’t even have the balls to mention David Benavidez because he’s f*** scared,” said Jose Sr about Jermall Charlo.

“All these guys right now. It’s all about money now. They just want a guaranteed win. We don’t give a f*** about that. We don’t care about n undefeated record. We’re here to give the fans what they want, a good fight.

“These people work so hard to buy pay-per-views and pay Showtime and all these channels. So why not give them what they want? I feel happy because all these guys are running from TeamBenavidez.

“I got fighters, hungry fighters that are willing to fight anybody. To be honest with you, I’ll tell you and all the people that a fight between Canelo and David Benavidez is NOT going to happen.

“I guarantee you that it’s not going to happen because David is only 25 years old. Canelo is 30-something-years-old. He’s more focused on playing golf. He has other businesses. Don’t get me wrong; he’s done a lot for the sport.

“To get where he’s at would be super hard because he has accomplished, but you have to remember that wear & tear on your body. He’s not the same. You saw when he fought Bivol. He got his a** kicked. I don’t know how he thinks he won that fight.

“He wants to fight Usyk now? He’s delusional. He’s crazy. Fight David Benavidez, somebody at your own weight. Somebody young, somebody strong. He wanted to fight at heavyweight. He would get destroyed by Usyk.

“He’s only talking s*** to get away from these fights. We’re here; let’s make this fight happen. I don’t think he’s going to. He’s chicken. He doesn’t want to make this fight. He’s afraid of David.

“Now, when you ask him about David, he gets mad. Why would you get mad? Come and shut us up. You’re the best. You got all the belts. A fight with him is a very dangerous fight for us; I’ll tell you that.

“We’re going to work hard, and we’re going to try and knock him out and try and beat him. We want to take all the belts away from him, and he knows that. That’s why he doesn’t want to fight with David. It’s as simple as that.

“I want to thank Al Haymon for keeping Davidactive. He’s got a fight coming up in November or December. We’re really close to closing a deal on that. He’s very busy. He’s only 25 years old. Canelo is 30-something years old.

“There’s a way that all these organizations can put a little more pressure for him [Canelo] to fight. You can’t fool the fanatics of boxing. You can only do it for a little bit, but they are going to demand those fights.

“People work so hard to pay for the fights. He’s going to have to leave those belts. He said he was going to go up to heavyweight. That’s why we got the interim. Guess what? He [Canelo] gets his a** beat [by Dmitry Bivol] and then comes back to 168.

“So, he’s going to have to go somewhere or retire. That’s what I think. We’re not afraid of fighting anybody. If someone wants to fight, even though they’re not at that level, like Morrell. I don’t think he’s at the level right now. 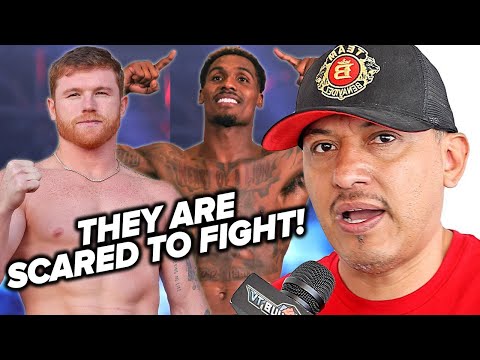