He was only 32nd finisher but Alastair Walker produced a stunning run as his 34:32 (34:36 gun time) took a minute off the world M65 best and his own British best.

Walker, who won the 2018 world M60 10km title, incredibly ran his fastest ever time according to Power of 10, though he may well have run quicker in his pre-vet career prior to the online resource being set up.

The other top class masters run came from fellow record-setter Fiona Matheson. The W60 actually beat the M60 champion as well as the W50 and W55 winners but her 38:50 (38:58) just missed her own British best.

The women’s race was won by Annabel Simpson’s 33:25 which gave her a three-minute victory.

Massachusetts was not the only venue for the Boston Marathon on Monday as Lincolnshire hosted this popular UK event.

The men’s race was close, with William Strangeway winning in 2:25:11 just six seconds up on first M40 Paul Molyneux. 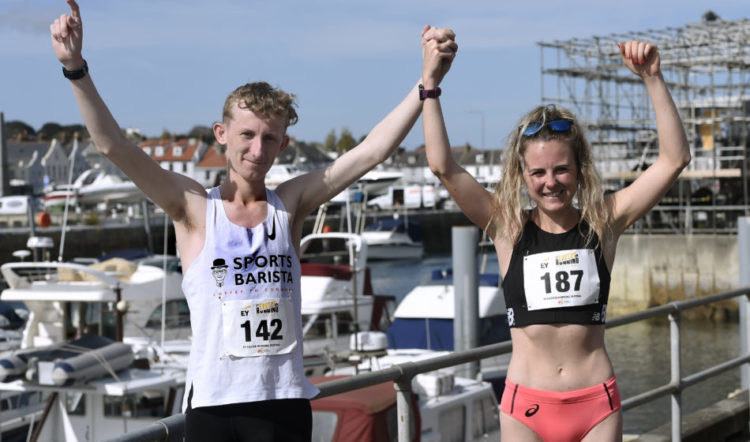 Michael Eccles was first man in 16:08, while South of England under-17 cross-country champion Hattie Reynolds was first woman in 17:49.

Kirsty Longley, who won the last Masters International cross-country in 2019 and is now a W45, was first woman in 28:27, while the men’s race was headed by Thomas Rogerson (25:12).

Jonathan Harding had a near two-minute win in 32:49 while Becky White (40:31) was the leading woman.

Danielle Hodgkinson easily won the women’s race in a PB and course record 33:29 while David Green (31:09) was first man. 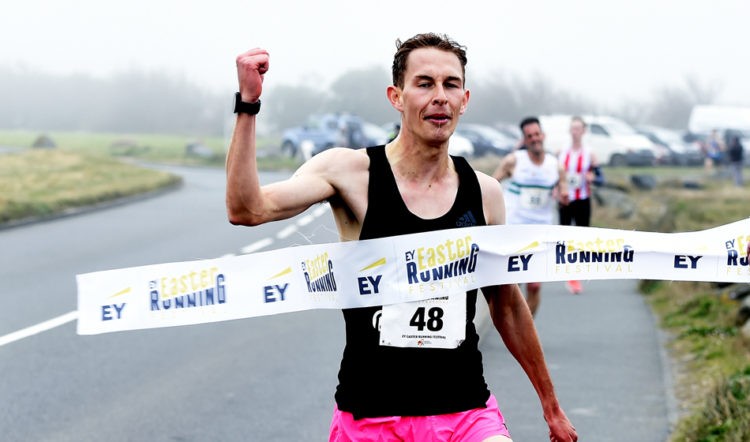 Lewis Gamble-Thompson carried on his run of recent victories, with a 30:08 clocking giving him a 30-second win over Rob Scott.

In very warm conditions on a multi-lap course and run alongside the 10km and 5km races, Dale Seddon managed to thread his way around the masses in 71:54 to win by over four-and-a-half minutes. W45 Tracy English was first woman in 87:52.

Dave Loomes was first man in the 5km in 17:09, with third-placer Clare Elms first woman in 18:05, missing her world age-58 best by a few seconds after the last 200 metres which were on a twisty grass finish. 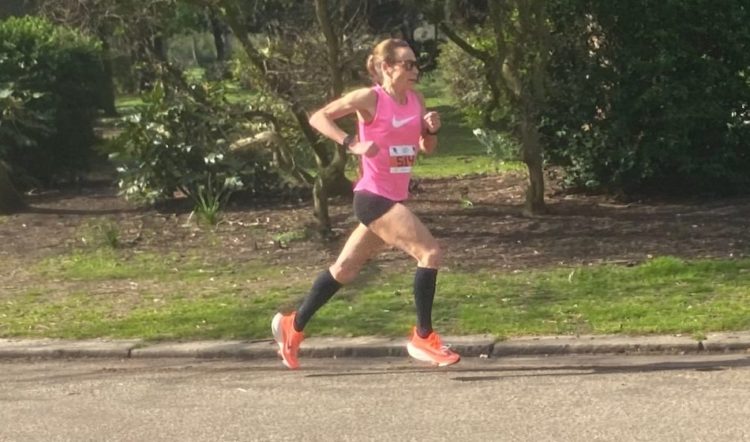 There were a number of world leads, though it was also a notable meeting from a British perspective.

While the men´s 200m was won by world indoor 400m champion Jereem Richards’ 20.12/1.5, almost as fast in another heat with slightly less favourable wind conditions was Briton Charlie Dobson with 20.19/0.9. 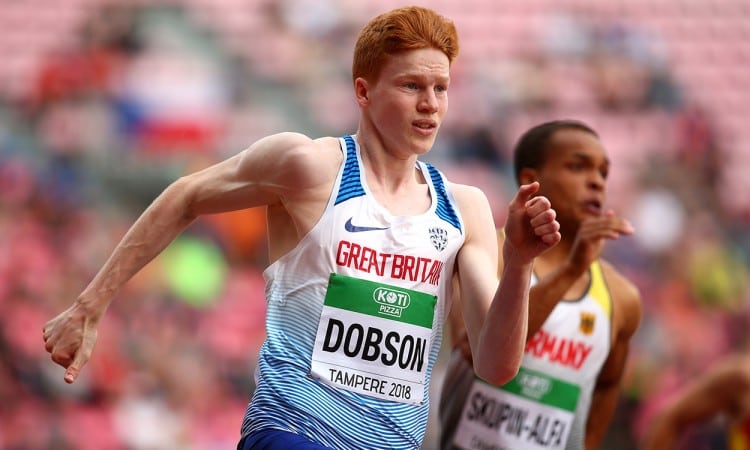 That time was a European lead, as well being a World and European Championships qualifying standard, and was a huge improvement on his previous PB of 20.52, set in the 2018 World Junior semi-finals. He finished well clear of a field which included Olympic 100m fifth-placer Ronnie Baker.

In the 400m, European champion Matthew Hudson-Smith showed he is getting back to his best form with a very easy 44.82 win – a World Championships qualifier – well clear of Alonzo Russell’s 45.65.
The B race was won by over a second by Joseph Brier’s PB 45.74 which is a Welsh Commonwealth Games standard.

In the university race current NCAA Indoor champion Javonte Harding 20.34 (+0.9) was followed by Daniel Stokes of Mexico 20.37 PB and Ugandan Tarsis Orogot 20.39, who just missed his national record from the World U20 Championships in Nairobi by 0.02.

Olympic 400m champion Shaunae Miller-Uibo won her heat in 49.91 but even quicker in another race was Jamaican Charokee Young’s world-leading 49.87.

Young had only finished eighth in last year’s Jamaican Championships and had failed to even make the relay squad.

In the men´s 800m Moroccan NCAA finalist Moad Zahafi took over a second off his PB with a 1:43.69 world lead.

NCAA champion Trey Cunningham set another ranking-topper as he sped to 13.22/0.4 in his heat but only achieved a 13.38/0.6 in winning the final.

The men’s 4x400m saw another mark to top the world and the 2:57.72 by the adidas team was the fastest ever time by a non National team. In fact, only six nations – USA, Britain, Bahamas, Jamaica, Netherlands and Botswana – have ever bettered it.

The adidas team did include two Olympic medallists though as their line-up was Steven Gardiner, Quincy Hall (who won the 400m hurdles in a world lead 48.55), World junior 200m record-holder Erriyon Knighton and world 110m hurdles champion Grant Holloway.

Adidas also set a world lead in the 4x100m with 38.09, with Knighton and Holloway being joined by Devin Quinn and Ronnie Baker.

Tumbleweed TC, with a team which included Olympic 200m champion Andre De Grasse and Trayvon Bromell, were second in 38.46, though they went one better in the women’s race with a world lead of 42.33 from a mixed nationalities team (a Chinese, an American and two Jamaicans) of Liang Xiaojing, Shania Collins, Natalliah Whyte and Britany Anderson, with North Carolina second in 42.83.

The global highlight of the opening day was a Nigerian 200m record, world lead and collegiate record of 21.96/1.3 by Favour Ofili.

The following day Nielsen ran a PB and UK 400m lead of 51.54 to land a European qualifier, while Alastair Chalmers set a UK lead in the 400m hurdles with 49.72.

In the field, John Meyer won the shot with a 20.50m PB while Nigerias Annette Echikunwoke 72.72m headed the hammer and Jamaican Roje Stona improved her discus PB to 64.98m.

Ghana’s Deborah Acquah won the long jump with a wind-assisted 6.77/3.4.

There was also a world lead for Michael Cherry in the 400m in 44.28 ahead of Brazilian Olympic 400m hurdles bronze medalist Alison dos Santos’ 44.54 PB. Alex Haydock-Wilson carried on his good form with 45.70 in fifth.

Triple Olympic champion Elaine Thompson-Herah set a 100m world lead of 10.89/1.6 in her heat but chose not to contest the final. Aleia Hobbs (10.95) and Michelle-Lee Ahye (10.96) stayed within a metre of the Jamaican in the heats and clocked legal sub-11 times.

There were also world outdoor leads in the women’s high jump as Vashti Cunningham cleared 1.96m, and also in the pole vault where Clayton Fritsch and Jacob Wooten both cleared 5.80m.

Bryce Hoppel won a slow, tactical  800m in 1:47.27 as Commonwealth 800m medallist Kyle Langford stumbled badly down the back straight and finished ninth and last in 1:51.90. 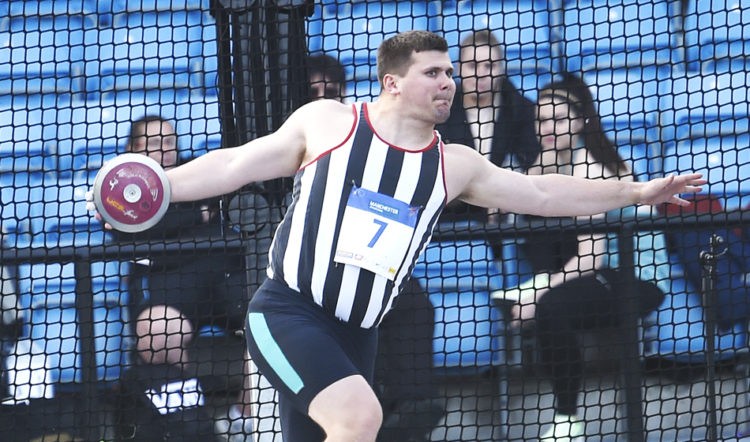 Olympic discus champion Valarie Allman 69.46m was a class apart in the women’s event, with Jade Lally fourth with a 59.22m throw.

Britain’s Thomas Staines won the men’s 800m in a temporary world lead of 1:45.28 ahead of  teenage compatriot Reece Sharman-Newell, who only broke 1:50 for the first time last month and ran a stunning 1:45.56 here. 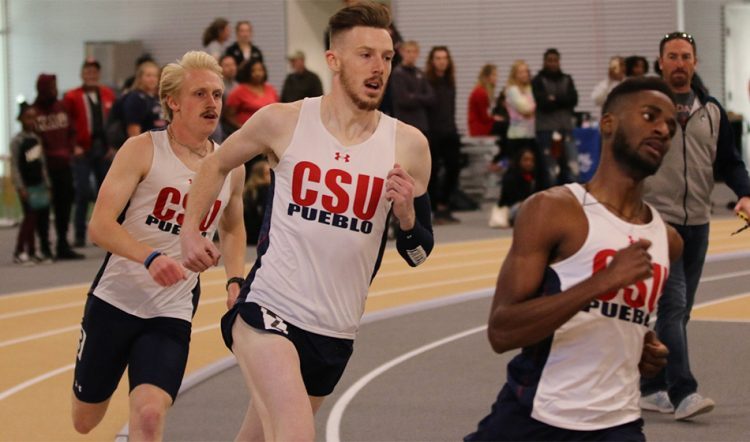 There was also a British victory and PB for former World Junior finalist and the 2013 English National under-13 girls cross-country champion Katy-Ann McDonald, who won the 800m in 2:00.98, with former NCAA Indoor 1500m champion Anna Camp-Bennett second in 2:01.09.

In further different races, George Duggan, who won the English national under-15 title in 2012, improved his PB to 3:41.86 while Jonathan Shields, son of former English National winner Jane, ran a PB 3:41.77.

Briton Sam Talbot won the decathlon with a UK lead of 7643 points which was a near 600-point PB.

Aydan Owens won the Decathlon in a world lead and Puerto Rican record of 8528 points with Briton Ollie Thorner eighth with a PB 7602 score.

NCAA champion Courtney Waymen set a world lead in the steeplechase with 9:26.88 ahead of Olympic finalist Valerie Constien’s 9:31.20.

The men’s steeplechase saw a victory for Japan’s Ryoma Aoki in 8:33.33 ahead of US record-holder Evan Jager’s 8:34.89 – his first completed steeplechase for four years. Briton Jonathan Hopkins was fourth in 8:36.92.

The 15:02.77 in the women’s 5000m by Olympic finalist Karissa Schweizer was a surprisingly modest world lead ahead of Emily Infeld’s 15:05.80 and Mexican Laura Galvan’s 15:09.80 and Briton Jessica Judd’s 15:11.72 . Judd’s time narrowly missed the world qualifying mark but was a European standard.

Tyra Gittens won the long jump with a 6.69/1.5 while Kara Winger was first in the javelin with 63.29m, while Andrew Liskowitz had a shot victory in 20.56m and Jamaican Ralford Mullings improved to 65.39m in the discus.

Earnie Sears equalled the world outdoor lead in the high jump with a 2.30m clearance

It was also faster than the outdoor world record of 10:36.50 set by the US team of Treniere Moser, Sanya Richards-Ross, Ajee’ Wilson and Shannon Rowbury at the 2015 World Relays.

Sean Donnelly won the hammer with a 75.55m throw while Canadian Michelle Harrison took the 100m hurdles victory in a heavily wind-assisted 12.86/4.2.

The English and British heptathlon champion Katie Stainton was close to her long jump PB with 6.26/0.6.

Bayley Campbell was second in the hammer with a 69.33m throw, while third-placed Edward Jeans also set a PB with 66.25m.

Almost every event witnessed a U.K. leading performance this weekend and the last to report was the mens Hammer where Joe Ellis threw 73.50m in Ohio- his best since 2018.

World steeplechase champion Beatrice Chepkoech won the 1500m in 4:10.04, having won the steeplechase the day before in a world lead 9:28.34.

The men’s steeplechase was won by Abraham Kibiwott’s 8:24.30.

The Jamaica girls under-20 team of  Serena Cole, Tina Clayton, Brianna Lyston and Tia Clayton clocked a World Junior record 42.58 to better their 42.94 mark at last year’s World Under-20 Championships in Nairobi. All four will still be juniors in 2023, too!

Wow. The Jamaican of quartet of Serena Cole, Brianna Lyston, Tia Clayton and her twin sister Tina Clayton break their own WU20 4x100m record of 42.94 with 42.58 at @CariftaTandF 🔥🇯🇲pic.twitter.com/l76cWp6Wpa

There was an Ecuadorian javelin record of 60.22m by Yuleixi Angulo.

World Indoor champion Darlan Romani was first in the shot with a 20.53m throw.

Joan Chelimo and Mosinet Geremew both set course records in the 92nd running of the event.

Chelimo set a Romanian record 2:18:04 with a two-minute-plus PB which places her third all-time in Europe.

Ethiopian Sutume Asefa Kebede was a close second in  2:18:12 with Bahrain’s Eunice Chumba third with 2:20:02 with Celestine Chepchirchir fourth in 2:20:10.

The world silver medallist Geremew also set a Korean all-comers record of 2:04:43  to finish six seconds ahead of Herpasa Negas’s 2:04:49.

The ever-consistent Senbere Teferi (top six in the last four global outdoor championships from 2016 to 2021) broke the course record with 14:49, 20 seconds outside her women’s-only world record.

In the men’s race, Charles Philibert-Thiboutot set a Canadian record with 13:35, placing just a second ahead of world indoor 3000m finalist Geordie Beamish, whose time was a New Zealand record.

Gerda Steyn took a second off the women’s course record with 3:29:42 in what was her third successive victory. Irvette van Zyl was second with 3:30:31 and Amelework Bosho (3:34:16) third.

In his first ultra, Edndale Belachew won the men’s race in 3:09:95 – just three seconds up on Nkosikhona Mhlakwana.

Lanny Rutton broke the course record with a 2:09:27 which is a Turkish all-comers record.

Scottish under-17 cross-country champion Corey Campbell went top of the UK under-17 rankings with a 3:52.46 PB.

The English National and English Schools under-17 cross-country champion Jess Bailey improved her PB to 4:26.05 in the mixed race. 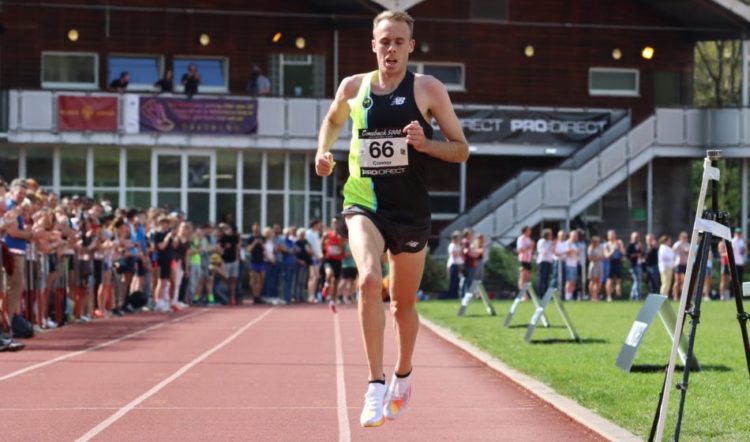 The women’s race was dominated by Sam Harrison who blasted the opening kilometre in a little over three minutes and won in a PB 15:32.07, almost 200 metres clear of Hannah Irwin (16:07.66) and the former England 800m silver medallist Georgia Bell, who ran a promising debut of 16:08.42 as the first 11 broke 17 minutes. 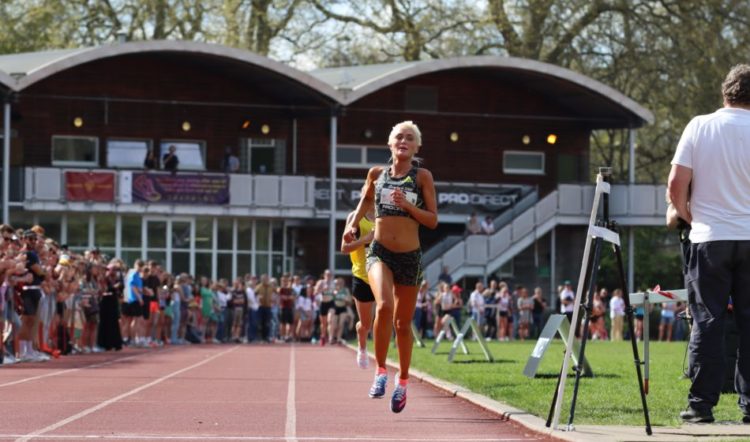 It moved her to eighth all-time in the UK. 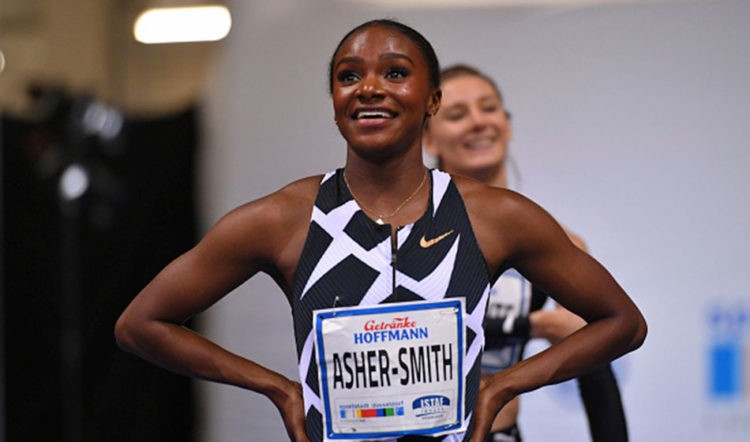 After a win during the week at the Gosport evening 5km and a parkrun victory at Bognor, James Baker gained his 994th lifetime victory at Lewes. 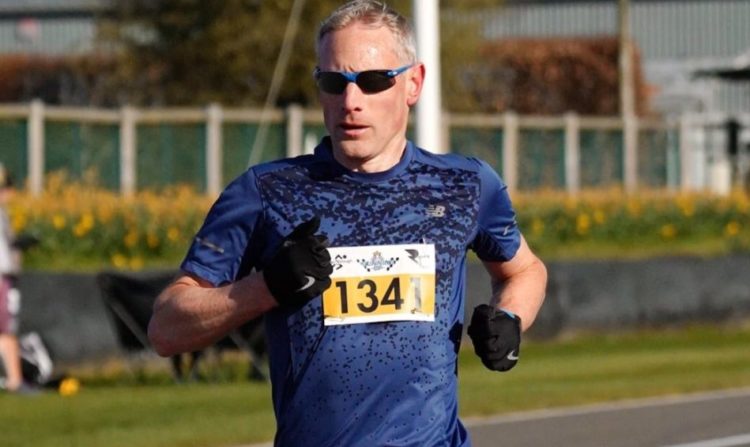 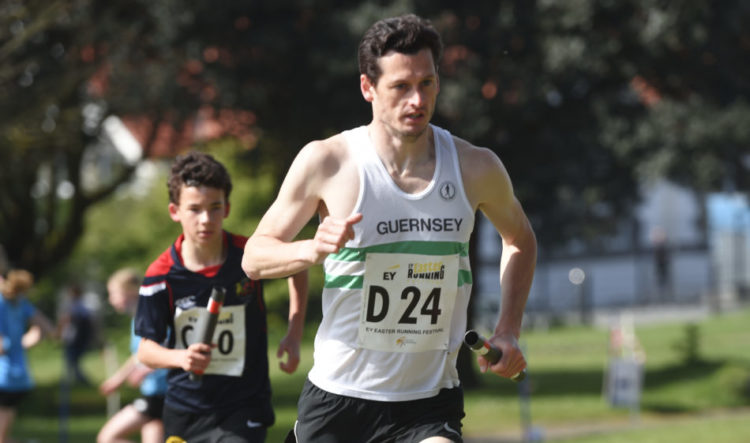 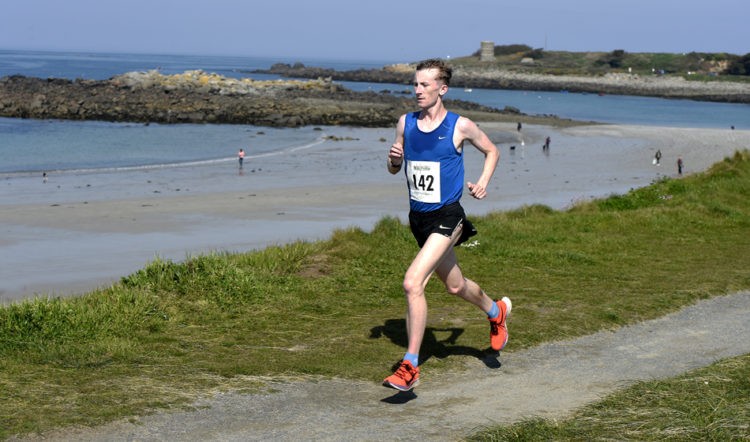