By Brian Webber: Jose ‘Rayo’ Valenzuela and his trainer Jose Benavidez Sr. were furious at being dismissed by lightweight contender Isaac ‘Pitbull’ Cruz during Thursday’s final press conference ahead of their respective fights this Sunday at the Crypto Arena in Los Angeles.

During the press conference, the former lightweight world title challenger Pitbull Cruz (23-2-1, 16 KOs) said he didn’t want to talk about ‘Rayo’ Valenzuela and that he needed to earn a fight against him on merit.

Pitbull Cruz has gained a lot of popularity after losing a close 12 round decision to Gervonta ‘Tank’ Davis last year.

Cruz is fighting Eduardo Ramirez (27-2-3, 12 KOs) in a 12 round fight in the chief support bout on the Andy Ruiz Jr. vs. Luis Ortiz card on FOX Sports PPV.

“I think that’s ridiculous because he’s talking like he beat Gervonta Davis and that he’s some kind of champion. He’s not no champion,” said Jose Valenzuela to Fight Hub TV about Isaac Cruz dismissing him during Thursday’s press conference.

“That just shows that he’s not too eager to get in there. He’s acting like he’s some kind of champion. He’s not acknowledging me and giving me my respect. I’m going to keep knocking these guys out and cornering him and showing everybody that he don’t want to get in there with me.

“They come up with all these stories now. To me, that’s fear,” said Jose Benavidez Sr. about Cruz not wanting to fight Valenzuela. “Who is Pitbull? Is he a world champion? He has to fight fights in order to fight him?

“Now, he’s making all these excuses. That fight is going to happen. We’re in the same company, and that’s a fight that people want to see. We want that fight. We’re not running from anybody.

“When people make comments like that about him having to work harder. He already did. Why not make that fight. If it was so easy, why not beat him? Give him the opportunity. He’s not a champion. We’re coming little by little, and we’re going to f*** everybody up,” said Benavidez Sr.

“I feel I have more advantages over him and more qualities as a fighter,” said Valenzuela about Isaac Cruz. “He only knows one thing. Going forward and throwing hooks. I’ve got a jab, uppercuts, and I can box.” 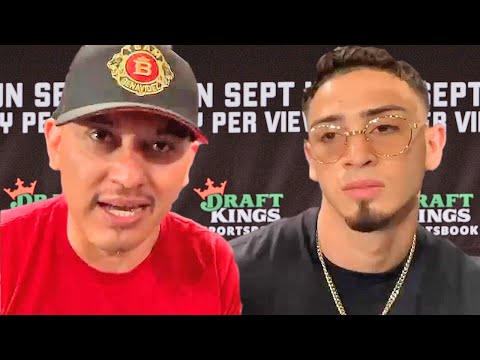