By Sean Jones: Shawn Porter says he no longer believes Canelo Alvarez will defeat Dmitry Bivol after watching the way he gassed out against an old Gennadiy Golovkin in their trilogy fight on September 17th.

Porter notes that Canelo (58-2-2, 39 KOs) faded in the later rounds against the 40-year-old Golovkin, which allowed GGG to come back and make it a competitive fight at the end.

Based on how the 32-year-old Canelo looked against Golovkin, Porter says he no longer believes he can beat Bivol (20-0, 11 KOs) when or if the rematch occurs.

If you ask me, Canelo stands no chance of beating Bivol, and has nothing to do with his subpar performance against a very old-lookin Golovkin.

Canelo was totally overmatched against Bivol last May, and at best, he deserved to win two rounds. Bivol appeared to win the fight 10-2, and the scoring was an abomination, with the judges turning in identical 115-113 x 3 scores.

The punches that Canelo threw were blocked on the gloves and the arms of Bivol, and only a rare shot leaked through. For every punch that Canelo landed, Bivol arguably nailed him with at least ten. It was a total route.

The fact that Canelo is putting conditions on Bivol needing to defeat Gilberto ‘Zurdo’ Ramirez in order to get the rematch against him, it tells you that he wants no part of a second fight against the talented Russian.

If Canelo was really interested in trying to avenge his loss to Bivol, he wouldn’t be saying that he must beat Ramirez. Bivol is likely going to totally school the painfully slow Zurdo Ramirez in their fight on November 5th. Still, it’s transparently clear that Canelo wants no part of a rematch against him.

Porter was surprised at how bad Canelo looked in his trilogy fight against Golovkin, but he shouldn’t have been.

If Porter had bothered to watch Canelo’s past fights, he would have noted that he’s been gassing out in his fights since his loss to Floyd Mayweather Jr and Austin Trout in 2013. Canelo has never had a good gas tank, and it’s worsened as he aged.

If Canelo does fight Bivol next May or September, he’s going to gas out after three or four rounds as he did in their first fight and wind up getting schooled.

Even with poor judging like their fight in May, Canelo will still lose by a landside against Bivol because he doesn’t possess the boxing skills or the gas tank to compete against him.

“I expected Canelo to dominate GGG. I just think GGG and Canelo are on two different levels, and Canelo didn’t show that,” said Shawn Porter to iFL TV. “The fact that he didn’t show that against GGG in this trilogy fight leads me to believe he may not be as prepared as I thought he would be in a rematch with Dmitry Bivol.

“Canelo wasn’t as prepared as he should have been against Dmitry Bivol. He didn’t have multiple game plans. He didn’t make any adjustments.

“He didn’t make one adjustment against Dmitry Bivol, and I knew that coming back against GGG, we were going to see a very dominant Canelo that we’d seen in the past and come right at GGG like he did. We didn’t see anything different about Canelo,” said Porter.

I disagree with Porter. Canelo tried to make adjustments against Bivol, but he didn’t have the ability to match his combination punching. Canelo was mostly throwing single power shots, hoping that he could duplicate the efforts that he’d shown with his wins over the paper champions at 168.

“One thing we did see different was his gas tank,” said Porter. “This guy was not conditioned for 12 rounds. You have to be conditioned to go 12 hard rounds, no matter who you’re in the ring with. I think if Canelo had been in better condition, that fight would not have gone the distance.

“Now, after seeing him against GGG, I don’t think that’s the case. GGG is not going to look back, which means there’s nothing but big, strong lions with good experience, with speed, with power, and all those different types of things ahead of him,” said Porter when asked if Golovkin should retire.

“I think he puts himself and his legacy at risk if he continues to go. What I do want to see is he says he’s not done. Let me see who you are now.

“If that fight against Canelo wasn’t your best you that night, then there are no excuses. But if you’re a better version of yourself in your next fight, okay, good. Keep going. You’re the anomaly that can keep fighting into your 40s.

“If that’s not the case, learn from the others and let it go now. I’m under the impression that we saw the GGG that we’re going to see from this point forward.

“Some things are just real. One thing we talk about all the time is the way guys age in the ring and the way we age on fight night. The heavyweights, as big as they are, their bodies just aren’t as mature as some of the younger guys.

“They can take a lot more punishment than the smaller guys as well. I’m just saying that to say when we look at GGG now, I think what we saw against Canelo was a very hesitant GGG that he really couldn’t find his timing.

“I think that he was a little gunshy because of his sharpness and how strong Canelo came out. People talk about GGG coming back in that fight. It wasn’t that GGG came back; it was that Canelo slowed down and didn’t have the same pop or speed. GGG found some confidence that he could throw.

“Once he threw, he landed, and that’s how the fight ended up going. The way I looked at it, we have a GGG that is a little older in the game, and I think there’s no turning back. The thing that’s undefeated in this world is time,” said Porter. 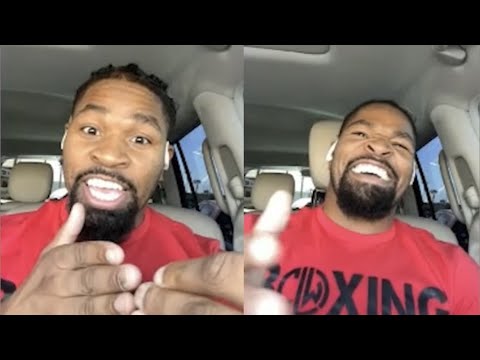