John has serious doubts about the Fury vs. Joshua fight taking place, which is why they’re looking at a plan-B option.

There’s no word about what happened with Manuel Charr, the fighter that Fury (32-0-1, 23 KOs) has repeatedly mentioned as his plan B if the Joshua fight doesn’t happen.

Fury’s management has got to know if they use Charr as Tyson’s opponent, they’re going to have problems selling tickets, and it won’t do well on pay-per-view.

Boxing fans don’t want to see Fury fight Charr, nor do they want to pay to watch him decimate 38-year-old journeyman Derek Chisora. This isn’t professional wrestling. Fans are going to happily pay to watch Fury beat up on Charr or Chisora in a fight with a largely predetermined outcome.

The 43-year-old Luis Ortiz (33-3, 28 KOs) is coming off a loss to Andy Ruiz Jr last month on September 4th, making him a poor choice for Fury to fight in December.

As for Andy Ruiz Jr, he’s probably not going to agree to fight Fury on short notice on December 3rd. Ruiz’s management at PBC isn’t likely to agree to let him jump back into the ring to challenge WBC champion Fury after his grueling fight with Luis Ortiz last September.

For his part, Filip Hrgovic (15-0, 12  KOs) is coming off a controversial 12 round unanimous decision win over Zhilei Zhang on August 20th. Many boxing fans feel that Zhang deserved the victory over Hrgovic. If Fury doesn’t care about that, Hrgovic would be a dandy choice for him, but he’ll look silly taking that fight.

“We’re looking at other people. Look at Andy Ruiz, Luis Ortiz, and Filip Hrgovic,” said John Fury to the Mailsport about Tyson Fury’s plan B options for his December 3rd fight.

“I doubt it will,” said John when asked if the Joshua vs. Fury fight will happen in December.

“I think Joshua’s sort of like getting doubts about fighting the Gypsy King.

“You know they’ve had that contract now, for well over a month. Nothing’s happened.

“I can understand why [they are stalling on the contracts]. He’s their Golden Boy. A defeat to Tyson Fury, financially. It would financial suicide for them, wouldn’t it? That’s why they don’t want it,” said John. 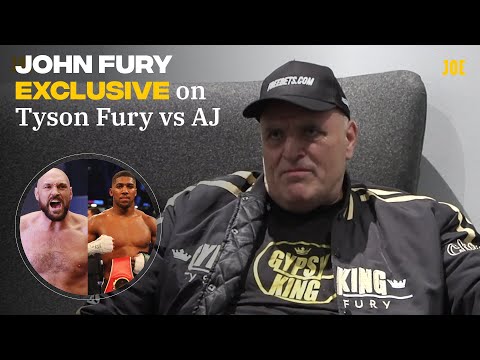